WTT Announces Official Sponsors For 2020 Season at the Greenbrier Resort 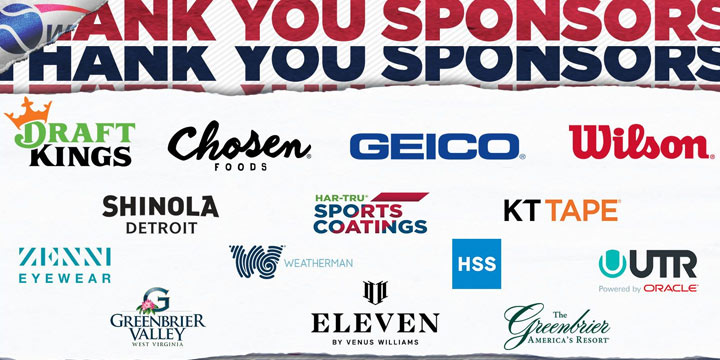 World TeamTennis announced category-specific sponsorship agreements for the 2020 season, which will be played in its entirety in West Virginia at The Greenbrier “America’s Resort,” WTT’s official hotel partner, from July 12-Aug. 2.

“We are excited that so many terrific brands have come aboard for what we feel will be the best season in World TeamTennis’ 45-year history,” said WTT CEO Carlos Silva. “Our field includes tons of Grand Slam winners, legends and rising stars and we look forward to helping bring tennis back in 2020.”

All of WTT’s 2020 regular season and playoff matches will be televised or streamed on CBS, CBS Sports Network, Tennis Channel or the ESPN family of networks. In addition, select matches will be live-streamed on ESPN+ and Facebook Watch.

Safety guidelines have been put into place by WTT with the guidance of local and state government officials in West Virginia and in adherence to all health and safety protocols set forth by the Center for Disease Control (CDC) due to the ongoing COVID-19 pandemic. Every fan at The Greenbrier will be required to pass a temperature check of under 100.4 degrees before entering the grounds. All fans will be required to wear a face-covering during the matches and will be checked a second time before entering the outdoor stadium, Center Court at Creekside, or indoor court for any matches, and will be denied entry should they fail the temperature check.

The 2020 World TeamTennis season will be powered by Universal Tennis Rating (UTR), the world’s most accurate tennis rating system. All WTT matches will count towards players’ UTR rating, and MyUTR.com technology will be used to set daily matchups by WTT team coaches and be integrated into WTT’s media broadcasts throughout the three-week competition.

WTT introduced professional team tennis in 1974, with Billie Jean King serving as its co-founder. WTT is one of five active U.S. pro sports leagues that has been in operation for over 40 years, along with the NFL, NBA, NHL and MLB.