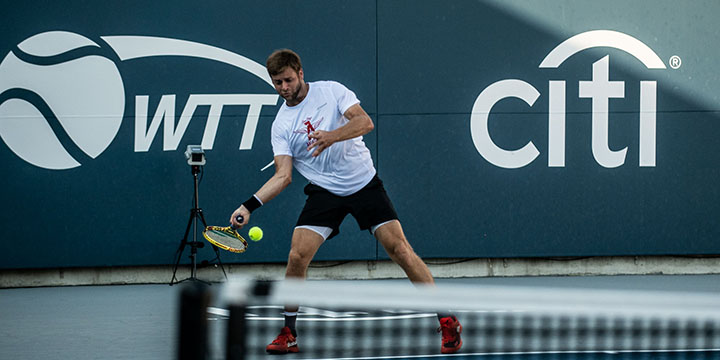 In what is shaping up to be one of the most spectacular seasons in the 45-year history of World TeamTennis, Coach John Lloyd and the San Diego Aviators are ready to make a strong run for the King Trophy at one of the most anticipated professional tennis events since the sport’s worldwide shutdown from the COVID-19 pandemic.

As professional tennis returns during these unprecedented times, WTT’s entire 66-match season, including playoffs, will be played from July 12 – Aug. 2 at The Greenbrier in White Sulphur Springs, West Virginia.

Lloyd begins his sixth year as Aviators coach. He has put together a solid roster for San Diego’s 2020 WTT campaign, which consists of Americans Ryan Harrison, Christina McHale, CoCo Vandeweghe and Nicole Melichar, along with Jonny O’Mara of Great Britain.

Harrison is a former French Open doubles champion. While McHale is a past United States Fed Cup and Olympic team member. They both return to the Aviators for the second consecutive year. Harrison is married to McHale’s older sister Lauren, giving the Aviators a literal “#WTT Family.”

Lloyd is happy to have Harrison, the 2016 WTT Male MVP, and McHale back with the Aviators. He plans on using both players in singles and doubles.

“Ryan is one of the great success stories for [World TeamTennis,] Lloyd said. “The fans loved him, so we’ve always wanted to get him back fulltime and now he’s committed to it. He’s a fabulous team tennis player.”

“I am very pleased with who we’ve managed to get this year with Christina, who has played exceptional tennis,” he continued.  “She played for us last year in four matches and she played so well. She’s got the energy and will excel on this kind of team.”

The 25-year-old O’Mara, a Scotland native, also returns for his second year in a row with the Aviators. The doubles specialist brought an unbridled enthusiasm to the court in 2019 and quickly became a fan favorite at the Omni La Costa Resort & Spa.

#HarrisonsHappyHour🍻: Grab your favorite beverage, pull up a stool & join #WTTAllStar @ryanharrison92 as he talks tennis, exchanges stories, asks your questions and more with @Jonny_OMara this Thursday at 5 PM ET on @Facebook, @DailyMotion, @Instagram & https://t.co/c7ZUINY7vo! pic.twitter.com/EXCbTmfqf2

“I love the (WTT) format and combining the sexes out there, along with the scoring system and music in between every point. It’s fast tennis. To be able to play last year was so much fun and probably the highlight of my year. I’m really looking forward to getting out there this year and trying to find a good level,” O’Mara added.

“I’m really excited. It’s the first thing I scheduled at the start of the year. I booked my July because I loved it last year. I enjoy being part of a team and bringing lots of energy and lots of positivity which is important in being a good teammate as well as trying to play your best tennis to bring in some results,” he continued.

San Diego added some incredible depth to the team roster when Melichar and Vandeweghe joined the Aviators. The 26-year-old Melichar, who made her U.S. Fed Cup debut last year, owns seven career WTA doubles titles and has been ranked as high as No. 12 in the world in doubles. The 2018 Wimbledon mixed doubles champion will be looking to make an immediate impact with the Aviators.

“I hope to play most if not all of the doubles and the mixed. With my history in mixed, especially the last couple of years at the Grand Slams, my level has been very high and I hope to play as many sets as I can. I have a good serve, so I hope to win as many service games as possible,” said Melichar, a former member of the Washington Kastles.

“I’m hoping to give the Aviators as many points as possible and also cheer like crazy from the bench. If they need me for singles, I’ve been playing some singles lately. I know we have CoCo and Christina for singles, but if something were to happen and they need me, I’m prepared for singles too. So, don’t count me out,” she added.

Vandeweghe will be playing her first full season with San Diego after making limited appearances with the Aviators the past three seasons. The San Diego fan-favorite gives the Aviators a player who is capable of winning matches in singles, doubles and mixed doubles.

A former Top 10 player in singles, Vandeweghe reached the Australian Open and U.S. Open semifinals in 2017. She also captured the U.S. Open women’s doubles championship in 2018 and advanced to the U.S. Open Mixed Doubles final in 2016.

“CoCo Vandeweghe is the female equivalent of Ryan Harrison,” Coach Lloyd said. “They’re excited, they’re animated and they want the team to win so badly. They’re aggressive. I look at CoCo and she can play in any of three events, any day, all day if necessary. She’s very flexible, she’s a superb doubles player in mixed and women’s doubles. Obviously, a superb singles player, so we’re covered in that area.”

The Aviators begin their quest for the WTT Playoffs on Sunday, July 12 against their Southern California rival, the Orange County Breakers in their season opener. According to Lloyd, getting to the playoffs will be anything but easy as the competition will be fierce.

The Vegas Rollers put together another wrecking crew highlighted by Bob Bryan and Mike Bryan, the winningest and most accomplished doubles team in tennis history. Plus 10-time ATP singles champion and five-time ATP doubles champ Sam Querrey along with Monica Puig, the reigning Olympic Gold medalist in women’s singles are all returning to the Rollers.

Want to travel to West Virginia with us to cheer on your Aviators in person?! Check out our Travel Guide FAQ https://t.co/Qhr3urmLkG pic.twitter.com/gTgDsPudWg

“We’ve got a good mixture. We’re all going to have to play well because I don’t see any team coming away with an easy route to the playoffs. I can’t see anybody getting through at 10-4 or 11-3. I don’t see that this year,” said Lloyd. “It’s going to come down to a couple of points here or there, which is what TeamTennis is about. Our players are going to have to enjoy the pressure and have fun out there and play the best they can.”

The Aviators will arrive at The Greenbrier with lots of motivation after losing to the defending champion Springfield Lasers 21-19 in last year’s WTT semifinals after holding a match point.

“That was brutal. The team was devastated afterward. These were not pro players who were just showing up for a paycheck. This hurt. It was great getting there but losing by that close of a margin, you want to make up for it,” said Lloyd, the 2016 WTT Coach of the Year.

“I know if we get this opportunity again and get to the playoffs, which is going to be tough, I think everyone is going to be raring to go,” Lloyd added. “We’re all on the same page and we want to win this trophy, especially this year with the standard being so high. It would be a hell of an achievement for everybody if they could do it.”

The Aviators could also have another source of motivation. WTT is increasing prize money in 2020 to a record $5 million, with an additional $1 million awarded in WTT Playoffs compensation, including a $500,000 bonus to the team capturing the King Trophy on Aug. 2.