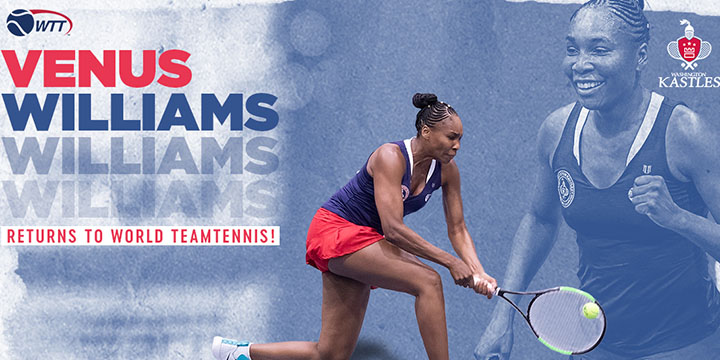 One of the sport’s all-time greats and a future International Tennis Hall of Famer, Williams will play her 15th season for the Kastles, a team she led to the King Trophy on four occasions in 2011, 2012, 2014 and 2015. She won her first King Trophy in 2006 while playing for the Philadelphia Freedoms and was named the WTT Final MVP in 2012.

“I’m excited to be playing World TeamTennis with the Kastles again this year,” Williams said. “It’s always a great time and I’m looking forward to getting back on the court, embracing the team approach, and hopefully leading the Kastles to another King Trophy.”

The tennis legend’s uniform will be designed once again by EleVen by Venus Williams. Williams is the founder and CEO of the lifestyle brand  that provides fashion-forward tennis and everyday looks for on and off the court. 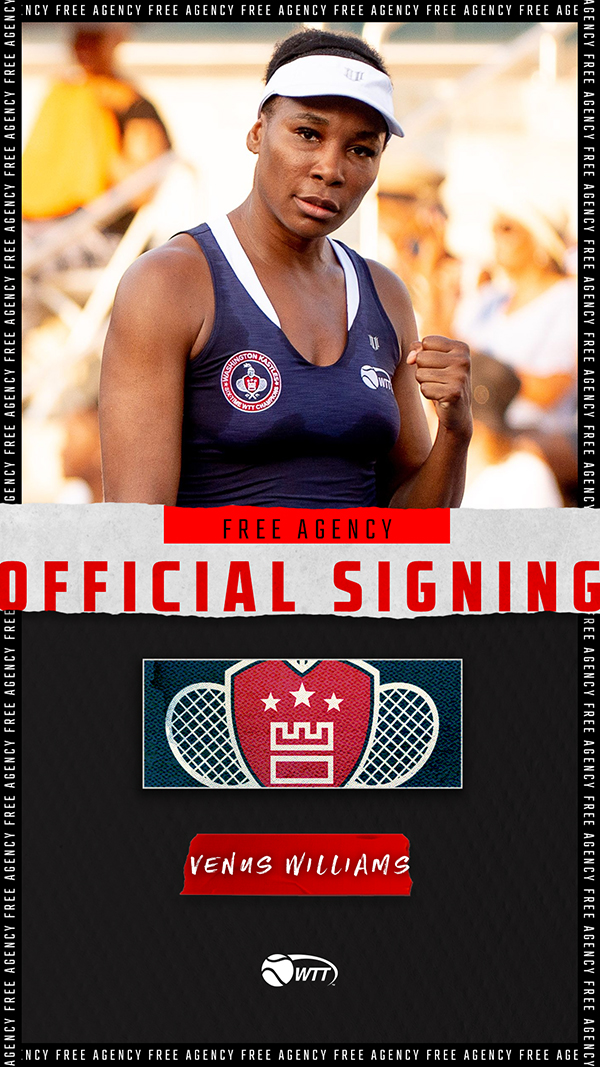 “I created EleVen to give women quality activewear that allowed them to feel great and perform better. I dreamed of creating a community that empowers women to feel and do their best in clothing that they can feel confident in on and off the court,” Williams said. “It’s the pursuit of your best self. This tireless pursuit is what wakes me every morning and drives me to push harder, live bolder, and keep learning every step of the way.”

The summer of 2000 was also the same year Williams made her WTT debut for the St. Louis Aces. She has played for the Delaware Smash (2005), Freedoms (2006-09) and Kastles (2010-12, 2014-15, 2017-19). The Kastles are led by rising American star Frances Tiafoe and includes teammates Marcelo Arevalo, Bernarda Pera, Nick Monroe and Arina Rodionova and are coached by former ATP player Robby Ginepri.

All of WTT’s 2020 regular season and playoff matches will be televised or streamed on CBS, CBS Sports Network, Tennis Channel or the ESPN family of networks. In addition, select matches will be live-streamed on ESPN+, Facebook Watch or WTT.com. WTT’s complete season broadcast schedule will be announced on WTT.com at a later date.

Safety guidelines have been put into place by WTT with guidance of local and state government officials in West Virginia and in adherence to all health and safety protocols set forth by the Center for Disease Control (CDC) due to the ongoing COVID-19 pandemic. Every fan at The Greenbrier will be required to pass a temperature check of under 100.4 degrees before entering the grounds. All fans will be required to wear a face covering during the matches and will be checked a second time before entering the outdoor stadium, Center Court at Creekside, or indoor court for any matches, and will be denied entry should they fail the temperature check.

The 2020 World TeamTennis season will be powered by Universal Tennis Rating (UTR), the world’s most accurate tennis rating system. All WTT matches will count towards players’ UTR rating, and MyUTR.com technology will be used to set daily matchups by WTT team coaches and be integrated in WTT’s media broadcasts throughout the three-week competition.