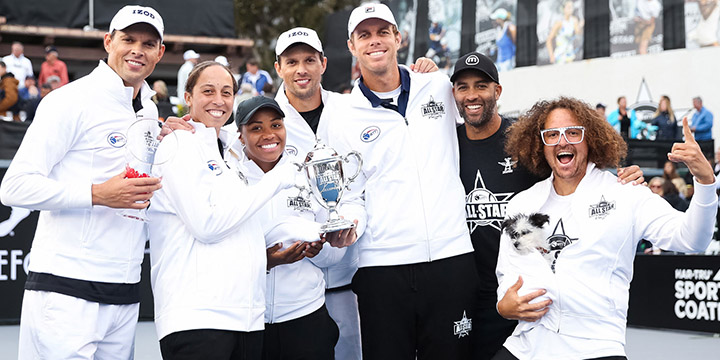 CARLSBAD, Calif.   — The weather held on a day that had threatened rain up until the morning of the inaugural World TeamTennis Celebrity All-Star Match at the Omni La Costa Resort & Spa, where a sold-out crowd was on hand to watch Team Bryan Brothers square off against Team Sharapova. Both teams were stacked with superstars from throughout WTT, including team coaches Mardy Fish of the New York Empire and James Blake, formerly of the San Diego Aviators.

📺 Watch more during the 2020 #WTTAllStar Match Presented by @BarefootWine, Saturday at 1:30 PM ET/10:30 AM PT only on @CBS! pic.twitter.com/pLwKw4FHcY

The deep history of tennis at La Costa wasn’t lost on the day’s participants—Sharapova reminisced about playing multiple WTA tournaments at the venue, and the Bryan brothers cited watching Davis Cup at La Costa in the 80s as their inspiration to first play tennis. Before play began, the event officially opened with a performance from Tom Higgenson, front man of the band Plain White T’s, who, accompanied by only his guitar, got a laugh from the audience starting his Grammy-winning hit “Hey There Delilah” with a tennis-spin, riffing “Hey There Maria” in honor of Sharapova.

Townsend, showing the finesse and utter dominance that made her the 2018 WTT Female MVP, threw in a nasty slice drop shot to break Puig, and then delivered a volley winner to take the set, 5-0. Afterward, current World No. 13 Keys told Hantuchová, “My tactic was to listen to anything that Taylor said.”

With some room to make up on the scoreboard, Ryan Harrison served first for Team Sharapova with partner Vandeweghe, where they met Team Bryan Brothers’ Townsend, who returned to the court with partner Mike Bryan. Harrison got the first point on a volley error from Mike Bryan and went on to hold after a blistering 130mph serve, putting team Sharapova on the board. Mike Bryan served next, and when Vandeweghe hit a smash for a winner to win the first point on Mike Bryan’s serve it suggested a momentum shift, but Townsend put that notion to rest as she returned the favor on the second point with a spike that flew into the stands, and Mike Bryan went on to hold.

One of the unique elements of World TeamTennis is the coach’s ability to call time-out and make substitutions at any time during a set, and coaches took advantage of both during the Mixed Doubles set. First, Team Sharapova called a time-out in the third game before Vandeweghe served a deciding point, but after a quick chat followed by a long rally, Townsend sealed the break with a touch volley winner. Then, in a surprise move by Team Bryan Brothers in the following game, Vegas Rollers assistant coach and pop star Redfoo subbed in for Mike Bryan on Townsend’s serve. After an audible hint from Vandeweghe to Harrison to aim for Redfoo at net, Harrison complied, and though Redfoo got the volley, Harrison got there for the winner. However, Redfoo won the second point on a volley that passed Vandeweghe, thrilling the crowd with proof that he has the chops to hang for a bit with the pros.
As the set tightened, Mike Bryan returned to the game, replacing Redfoo, and held. The atmosphere was charged as Team Sharapova showed their grit. Vandeweghe gave a signature celebratory lawnmower after hitting an alley winner past the seemingly unstoppable Townsend, and held after drawing an error from Townsend to take the set score to a close 3-4, but Townsend then held to win the second set for Team Bryan Brothers, 5-3.

Team Bryan Brothers’ Keys dealt reigning Olympic gold medalist Puig an ace to hold in the first game of Women’s Singles, then broke Puig to quickly go up 2-0. However, Puig showed she was in it with a Townsend-worthy slice drop shot on Keys’ serve and went on to break Keys and put the set back on serve.

With the seal duly broken on substitutions, both teams subbed with abandon for the remainder of the match, ensuring there wasn’t a dull moment, or worse, a runaway. After Keys turned it right around and broke Puig late in the fourth game of women’s singles, Team Bryan Brothers sent in Townsend for Keys to serve, and she immediately put her volley skills on display with a serve and volley play to draw the error from Puig, pushing the set to 4-1. Vandeweghe replaced Puig in the sixth game of the set to serve and held, keeping team Sharapova in it at 2-4. She then broke Townsend to put the set back on serve at 3-4, but despite high-level tennis on both sides of the net, Team Bryan Brothers again took the set at 5-3, leaving the match score at 15-6 at halftime.

Following a brief intermission featuring the All-Star dancers and Redfoo dancing on the sideline, the competition grew more intense as two big servers—Harrison and Team Bryan Brothers’ Sam Querrey—took to the court for Men’s Singles.


#WTTAllStar Exclusive: In her first interview since retiring, tennis great @MariaSharapova talks to WTT's @dhantuchova about her decision to step away from the sport she loves & what she's looking forward to now.

After back-to-back holds, a net cord exchange in the third game left Querrey on the ground; Harrison then hit two aces in a row. A close serve after that was called out, leading Querrey to quip, “He’s never gonna ace me three in a row.” Harrison then secured a crucial break on a deciding point to drive his team to a lead in a set for the first time in the match at 3-1, at which point the substitutions resumed.

Team Bryan Brothers brought in Captain Blake, who couldn’t return Harrison’s 123mph first serve. With a Harrison hold at love, Team Sharapova rose to 4-1 on the scoreboard, with a match score at a much closer 16-10. Team Sharapova captain Fish stepped in for Harrison in the sixth game to test his skills against his good friend Blake, and both players were subjected to harassment from Umpire Jensen with jokes about their comparatively slow-motion game and Geritol.

With the set score at 4-2 and Fish serving, the antics began in earnest, with teammates coming on court with water and towels for their players. Through it all, Fish hit a forehand winner to hold at love, tauntingly joking “Run James!” as he watched Blake attempt to reach it, and Captain Fish delivered Team Sharapova’s first set win of the match at 5-2.

The final set of the match fittingly began with Mike and Bob Bryan, whose storied doubles career will conclude later this year, playing for their team and serving first against partners Harrison and Fish. In the second point of the game, Harrison took a hit from a Bob Bryan overhead and landed on the ground, but the two hugged it out and play resumed.

No doubles novice himself, the 2017 French Open men’s doubles champion Harrison served in the second game and held after a wild point that saw both Fish and Mike Bryan toss their rackets in the air to catch alternate shots.

After a Mike Bryan hold, Team Bryan Brothers secured a crucial break to lead the set 3-1. With Bob Bryan serving a deciding point in the fifth game, Fish and Harrison tried to convince Captain Sharapova, who’d announced her retirement just days before, to take the serve, but she declined, and after an extended rally, the Bryans took the game to go up 4-1.

With the match on the line, in true WTT fashion, a ball kid was subbed in for a point before things got back on track and, through it all, Harrison managed to hold and keep Team Sharapova alive in the match. Ultimately, the Bryan brothers, the winningest doubles team in tennis history, secured the set and the match with a final score of 22-13, and were named co-All-Star MVPs.

Following play, Bob Bryan talked about what’s brought him and his brother so much success throughout their illustrious career, dispelling any notion they may be resting on their laurels as their time in the pros nears its conclusion. “We’re always working every day to get better,” he said. “We don’t really reflect or take time to enjoy the win. We’re always kind of pushing and seeing what we can improve. It’s probably what’s kept us consistent over all these years. We’re retiring in a few months so we’ll get to kind of enjoy the work we’ve done over the years.”