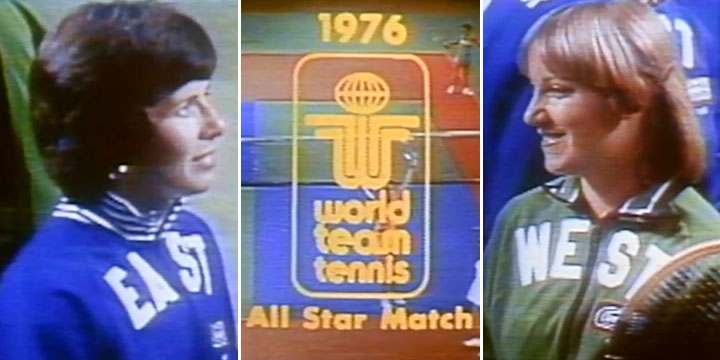 “You’re not going to believe what happened.”

Billie Jean King teased tennis fans around the world when she said those words during the introduction to the 1976 WTT All-Star Event. As it continues to do today, World TeamTennis delivered an action-packed event featuring the top players of the day.

In 1976, WTT featured 10 teams divided into the East and West Divisions. The two divisions squared off at the Oakland-Alameda County Coliseum Arena on July 10th to battle in the WTT All-Star Classic. Watch this classic match now.

The West overcame a 21–17 deficit after four sets when Betty Stöve and Dianne Fromholtz beat Martina Navratilova and Virginia Wade in a tiebreaker and then proceeded to win three consecutive games to send the match to a super tiebreaker.

A crowd of 12,581 fans watched both teams make substitutions for the super tiebreaker. Chris Evert entered for Fromholtz, while Billie Jean King and Evonne Goolagong replaced Wade and Navratilova. Evert forced Goolagong into an error to seal the West victory.