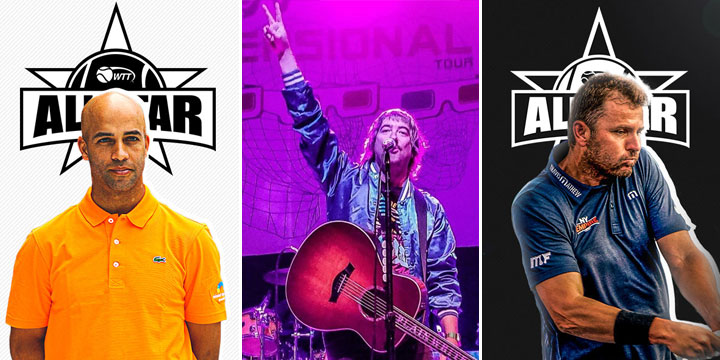 WTT All-Star Weekend presented by Barefoot Wine & Bubbly kicks off WTT’s 45th season in 2020 at the home of WTT’s San Diego Aviators and is sold out to a capacity of 2,500.

Higgenson will perform an acoustic set at a private reception during WTT All-Star Weekend presented by Barefoot Hard Seltzers on Saturday evening. Prior to the start of Sunday’s WTT Celebrity All-Star Match, he will sing his band’s breakthrough single, “Hey There Delilah,” which earned a ‘Song of the Year’ Grammy nomination in 2008 and a ‘Monster Single of the Year’ nomination during the 2007 MTV Video Music Awards.

Renowned Las Vegas headliner Lorena Peril – the host and lead singer of the entertainment show, “FANTASY,” at Luxor Hotel and Casino – will sing the national anthem prior to the start of the WTT Celebrity All-Star Match.

“The stars have aligned for WTT All-Star Weekend presented by Barefoot Hard Seltzers , and we are poised to make this World TeamTennis event an annual spectacle,” WTT CEO Carlos Silva said. “The demand for World TeamTennis is evident in that this match has been sold out for quite some time. WTT Celebrity All-Star weekend brings together many of our most popular WTT stars and best American tennis players with live entertainment from accomplished musicians which we feel is going to produce a fantastic vibe and fun atmosphere under the bright skies of San Diego County.”

Those expected to be in attendance for the WTT Celebrity All-Star Match from the sports and entertainment industry include musician Redfoo, an assistant coach for WTT’s Vegas Rollers who is also the “Party Rock Anthem” singer from LMFAO, actress Elisabeth Shue, Atz Kilcher and Andre Ethier, a retired two-time MLB All-Star with the Los Angeles Dodgers.

Fritz, the 22-year-old rising star who won his first ATP singles title in a June 2019 Wimbledon tune-up at Eastbourne and was a three-time finalist on the 2019 ATP Tour, and Querrey (owner of 10 ATP singles and five ATP doubles titles) are two of the ATP Tour’s four highest-ranked American players at No. 35 and No. 41, respectively, and headline the WTT Celebrity All-Star Match on the men’s side. Querrey and the Bryan brothers played on WTT’s expansion Vegas Rollers in 2019.

Keys is a five-time WTA singles champion and 2016 U.S. Olympian currently ranked No. 12 in the world. Keys played for the WTT expansion Orlando Storm in 2019 and has routinely contended for WTA Grand Slam titles in recent years. She was a 2017 U.S. Open singles finalist and, in 2018, reached the semifinals of the French Open and U.S. Open, and the Australian Open quarterfinals.

Come and see top talent from the 2019 World TeamTennis season and soon-to-be-announced celebrities from the tennis and entertainment industries during the WTT Celebrity All-Star Match on March 1, 2020 at Omni La Costa Resort & Spa in Carlsbad, California. Limited seating is available for the WTT Celebrity All-Star Match, and the seating is sold out, but a few grounds pass remain!