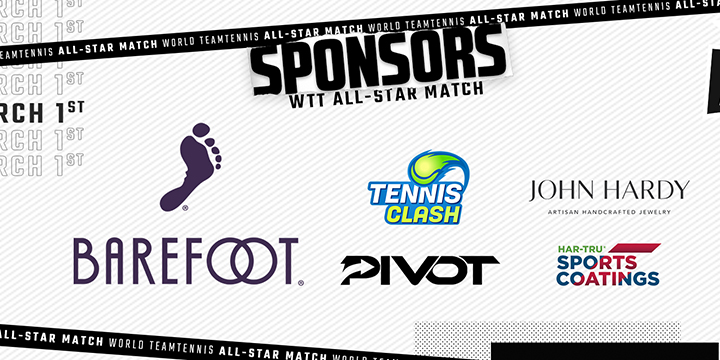 “It is a testament to the continued growth of World TeamTennis and the high-level of players committed to compete in our inaugural All-Star match on CBS, that we’ve been able to accrue such a terrific lineup on sponsors, including presenting sponsor Barefoot Hard Seltzer, for this sold-out event,” said WTT CEO & President Carlos Silva.

“We are thrilled to introduce Barefoot Hard Seltzer, the first nationally distributed, wine-based hard seltzer, during the inaugural All Star weekend with the WTT,” said Anna Bell, Barefoot’s Vice President of Marketing. “At Barefoot Wine, we are passionate about making great products that fit consumers’ needs in a variety of tastes and lifestyles. That’s why we’re so excited to share our new 70-calorie, wine-based hard seltzer with tennis fans.”

The WTT Celebrity All-Star Match will follow WTT’s match format – one set (first to five games) each of men’s and women’s singles, men’s and women’s doubles and mixed doubles. The players will be split up into the following teams: