The WTT Family Remembers The Life And Legacy Of Kobe Bryant 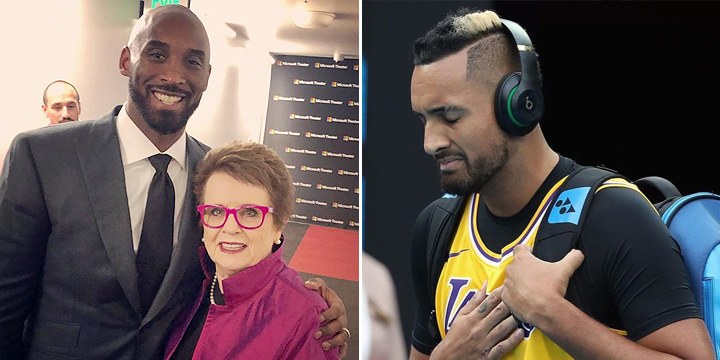 The sports world lost a great competitor and the NBA lost one of its greatest players on Sunday when Kobe Bryant tragically died in a helicopter crash. The accident claimed the lives of eight other people, including Bryant’s 13-year-old daughter.

Tributes from around the world flooded social media in memory of Bryant. Many members of the WTT Family shared their thoughts, memories and reactions to the life and legacy of the Lakers legend and tennis fan.

As a die hard Lakers fan, l loved the show he brought to LA. As an athlete, I respected his work ethic and passion for his sport. But I’ll never forget the Opening Ceremonies in Beijing. He patiently smiled, chatted, and shook every one of his fellow Olympian’s hands. He was humble and gracious and pure class. Thank you for being our hero, Kobe! RIP Mamba and Mambacita ❤️

Our deepest condolences to the family and friends of @kobebryant, as well as to the entire @lakers family. This is a horrible tragedy. Kobe was one of the best to ever play the game of basketball, and I was fortunate to spend some time with him at last year’s #espys. May he Rest In Peace. #kobe

‪I’ve just learned that Kobe’s 13-year-old daughter, Gianna, who loved basketball just as much as her dad did, has also passed away today. My heart is with the Bryant family. ‬ #kobe

First off i wanna start by saying WTF. This just don’t seem real at all. We are talking about arguably the greatest sportsmen of all time. I mean a guy who put everything into his craft for 20 years to be the best of all time. A guy who cared about nothing but being great. Now he has the time to enjoy his family and friends, then this happens. It’s too short y’all life is just too short. All I gotta say aspire to be great each and everyday. Be appreciative each and everyday. Never take this shit for granted because you never know when it’s your last day. We all love u @kobebryant. #mambamentality #rip 🙏🏿🙏🏿🙏🏿

You were one of the people that showed me how to be a winner. I remember when you were writing raps in your notebook wearing a backpack! Seeing you at one of my shows smiling in the front row I will always remember that! Thanks for being so nice to me! You will be greatly missed. Rest In Peace! 💔😢

Can not believe what happend to you and your daughter.. I had the honour and privilege to meet you 2 years ago. You were such a nice, friendly guy. Down to earth. Who couldnt stop talking about tennis. How you wanted and could improve every little detail about your tennis game. The fact that you already had so much passion and determination for tennis and every little detail about the game to get better every day was so admiring and inspiring. Could not even imagine how much of a hard worker you were in your sport. A sportsman, a father, a husband, and above all that, a true legend.. All my thoughts go out to your family.. R.I.P black mamba.. 💫💫

Rest In Peace Kobe Bryant ♥️ Sending our sincerest condolences to the Bryant family over the loss of Kobe and his daughter, Gigi. Pictured: Kobe Bryant playing at the Fourth Annual Mia Hamm & Nomar Garciaparra Celebrity Soccer Challenge at Kastles Stadium at the Wharf in 2011, helping to raise nearly $100,000 for the Mia Hamm Foundation and Children’s National Medical Center.

This is such a tragedy. So devastating. This can’t be real life… RIP 🙏🏼 pic.twitter.com/fLYbAbXUYg

Kobe and Gigi💔 This is incredibly difficult to process. I will never forget your generosity, and the time you set aside in some of my most difficult moments. I am forever grateful. My heart is with you and your beautiful family. pic.twitter.com/rnGI8o1p5L

I saw him play in Beijing, I feel lucky. May he RIP and to all in this tragic accident. God bless all of them. @WorldTeamTennis @kobebryant @Lakers

I’m heartbroken to hear this. Celebrating his successful career with @KingJames #recordbreaking night it’s hard to swallow #RIP #Kobe My heart goes out to his family and friends🙏🏽 https://t.co/7oW3KRhC1T

Life is so precious man. I was a huge fan. RIP Mamba

To the others onboard that died as well…. We are praying for y’all too #RIP

I’m still in shock over everything that happened yesterday. It feels like a nightmare that we all want to be woken up from. Kobe was a legend on and off the court. He changed the sports world. But he was bigger than basketball. He was an amazing father and person..

This is something else. https://t.co/xp6R8XgxMl

Kobe Bryant was everything an athlete dreams of becoming. He was a legend, and he will forever be an inspiration. RIP Kobe