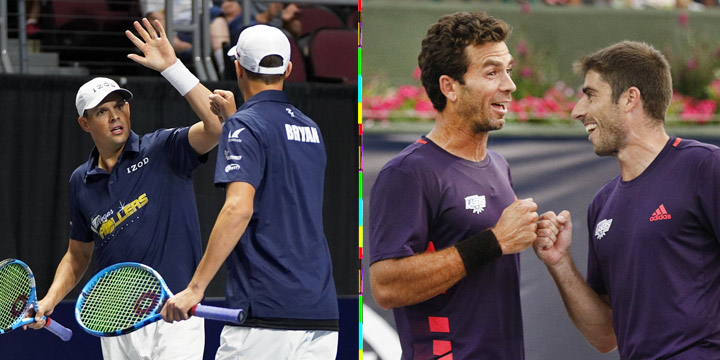 This week we caught up the Vegas Rollers legendary duo of Bob and Mike Bryan and Springfield Lasers specialist Enrique Lopez-Perez.

In the summer of 2019, the Vegas Rollers launched their inaugural season in World TeamTennis. It was a no-brainer that two of WTT’s most decorated players would help bring professional team tennis to the desert.

“We were stoked when we found out we were going to be playing for Vegas,” Bob Bryan said. “We have been playing WTT since we first turned professional. We feel the competitive nature of WTT best prepares us for the U.S. summer hard court swing.”

The Bryans have a personal connection to Vegas. Team Bryan, the philanthropic organization founded by the twins in based in the city. It is an elite leadership program within the Inspiring Children Foundation that is sponsored by the  brothers. The program is designed to help underserved children maximize their potential in all areas of their lives.

As expected, the atmosphere for the home opener was pure Vegas. A starry mix of the local entertainment meets professional tennis.

Unfortunately for the Bryan Brothers and the Rollers, the chips didn’t fall their way. The defending champion Springfield Lasers moved to 5-0 on the season and ruined the Vegas Rollers’ first home match in franchise history with an exhilarating 19-18 victory.

Springfield’s Men’s Doubles team of Enrique Lopez-Perez and Jean-Julien Rojer defeated Vegas’ Mike and Bob Bryan 7-4 in a tiebreak to secure the victory in the final set of the night.

“With the last match, we knew we had to keep our serve because on paper they are better than us,” Lopez-Perez said. “I think we played we really aggressive and we did a good job.”

After the teams held serve in the final set, the Bryan brothers won the last two games to tie the match at 18-all and force the tiebreak.

Rojer and Lopez-Perez scored the first three points in the tiebreak and opened a 4-1 lead before the Bryans rallied for three straight points to tie the score. But Rojer’s mishit snuck through the twins to steal momentum. Then Mike Bryan couldn’t handle a return to give the Lasers match point, and Rojer finished things off with a solid return that Bob Bryan failed to counter.

The Bryans were featured in two World TeamTennis matches in the 2019 season. Unfortunately, the two future Hall of Famers were unable to add to their career win total. The twins announced their retirement from the ATP Tour after the 2020 U.S. Open and they have big plans in 2020.

“Right now we really see it as our last chapter, but we’d love to have a couple of big results on the way out,” Mike Bryan said. “That’s what keeps us going, and having a lot of fun and enjoying our last stops at some of these places. It’s about giving back to the community, and hopefully we’ll inspire some kids to take up the sport. That’s pretty much what it’s about for us now.”