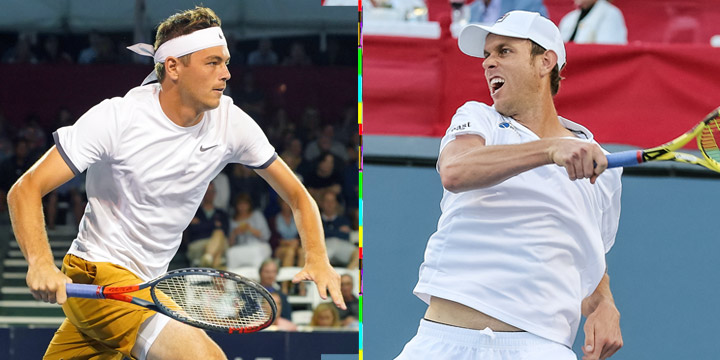 Sam Querrey and Taylor Fritz aren’t the tallest guys playing in WTT but they have no problems reaching those Wilson US Open 2’s when the can packs are on the top shelf. Querrey tops out at 6’6, while Fritz measures a lean 6’4.

Those lanky frames produce high-speed serves. The two World TeamTennis stars are known to throw off serves as high as 149 mph.

When the Vegas Rollers traveled to Omni La Costa Resort & Spa to take on the San Diego Aviators, the San Diego crowd was expecting the tennis version of “The Fast and the Furious.”

“There was definitely an electricity in the air,” Fred Sidhu said. “Fritz had grown up in nearby Rancho Santa Fe and did pre-match interviews with all the local media. His return to the San Diego area was a big local story.”

The final set of the night featured a highly-anticipated rematch in Men’s Singles between Querrey and Fritz. The last time they met was earlier in the summer on June 29th at the Eastbourne International in Eastbourne, United Kingdom. Fritz won his first career ATP Tour singles title with a 6-3, 6-4 decision.

Things would be different this time around. Querrey clinched the victory for Vegas as he dispatched Fritz 5-4 in 20 minutes. Following his win in Men’s Singles, Querrey was asked if his loss to Fritz in Eastbourne played a factor.

“No, not at all. This is more us playing for our teams, and I was glad to get a win and help our team win. We’re going to probably play many more times in the future, in World Team Tennis and [other] tournaments, so there will be other times to get him back,” he said.

Querrey wrapped up a night of inspired tennis for the Rollers, who spoiled the Aviators home opener with a 23-15 victory.

“I was bummed not to pull this out for my team that night,” Fritz said. “It was my only home match of the year in 2019. The entire atmosphere at La Costa was incredible. I have never seen the crowd that into it before and it was such a blast to play at home in front of my family and friends. Sam and I have played a number of times in tournaments and in practice and I was glad that we were able to put on a good match in front of everybody even though he had the edge that night.”