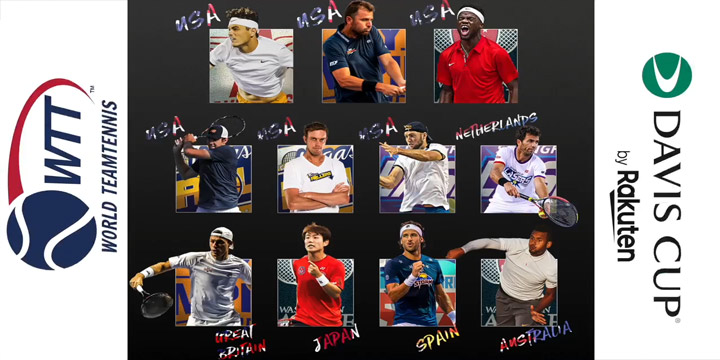 This is a new era for the Davis Cup, featuring a new format that is dramatically different that the previous 118 years of the competition.

In the old format, national teams played five best-of-five-sets ties in four weeks over a course of months at world-wide sites. Now, the Davis Cup moves to condense the World Group to four rounds of three best-of-three matches at a neutral location.

There are 18 nations competing in the Davis Cup at La Caja Magica in Madrid, Spain. The event takes place from November 18 to 24.

2019 Davis Cup Draws and Results
This new-look Davis Cup will have a World TeamTennis influence as 11 players from six different countries bring 2019 WTT experience to the prestigious event. Team USA features five World TeamTennis players from the 2019 season, including Captain Mardy Fish, who was a member of the New York Empire.

“It is something that is a dream job for me, something I won’t take for granted,” Fish said during a Davis Cup conference call. “To be the next Davis Cup captain is incredibly humbling.”


Liverpool tennis ace @nealskupski is making his debut in the Great British tennis squad for the @DavisCup with the help of brotherly love from @k_skupski. They've been speaking to @dchisnallITV pic.twitter.com/8ujJLTdFls

Team USA brings the most WTT experience to the Davis Cup as all the players on the roster have spent time with World TeamTennis over the past few years. Taylor Fritz, Reilly Opelka, Sam Querrey and Frances Tiafoe all took the court in 2019. While Jack Sock most recently played for the Springfield Lasers in 2018.

Fish is really excited about how the American team looks and the overall state of American men’s tennis in general.

“We’ve got three guys just off the top of my head that are going to be the future [American men’s tennis.] Reilly Opelka is playing some great tennis and is someone who is incredibly scary for some players – the idea of a 6-11, 7-footer with the kind of serve and forehand that [John] Isner has, with some crazy athleticism,” Fish said during an interview with USTA.com.

“And working a lot with Taylor Fritz over the years and working closely with his coach David Nainkin – he used to be my coach; he took me all the way from 350 in the world, when I had a knee surgery, all the way to No. 7 in the world and the World Tour Finals – so I’m aware of what Taylor has done and continues to do over these past few years. And Frances Tiafoe – his upside is incredible; his athleticism is incredible”

The United States is in Group F with Italy and Canada.

While the U.S. team has the bulk of WTT experience, several other countries feature rosters with players from World TeamTennis. Jean-Julien Rojer will show off his Springfield Laser 2019 King Trophy championship gear while playing for the Netherlands in Group E. Also featured in Group E is the New York Empire’s Neal Skupski on Great Britain. Skupski will bring his own WTT swag to the Davis Cup. He was named WTT Male Most Valuable Player presented by Forevermark for the 2019 season.

Group A will feature France, Serbia and Japan. While the Serbian team will feature one of tennis’ Big Three in Novak Djokovic, Japan’s team will have social media superstar and Washington Kastles fan-favorite Yoshihito Nishioka. Spain brings power and grace into Group B along with Russia and Croatia. The Spanish team features world number one Rafael Nadal and WTT’s Feliciano Lopez, who was traded by the expansion Orlando Storm to the Philadelphia Freedoms.

Group D is made up of Australia, Belgium and Columbia. Nick Kyrgios is back on board with Team Australia. He was the featured player for several matches this summer for the Washington Kastles. Kyrgios can be controversial at times, but Australian captain Lleyton Hewitt told The Guardian it was Kyrgios’ performance in team formats like World TeamTennis’ that made the fiery Aussie a perfect choice.

“He’s done everything I needed in the past,” Hewitt said. “There’s a lot of things he does in a team environment well and I actually think we will see the best of him.”

Argentina, Chile and Germany will make up Group C. It’s the only group in the Davis Cup that doesn’t feature any players from World TeamTennis.