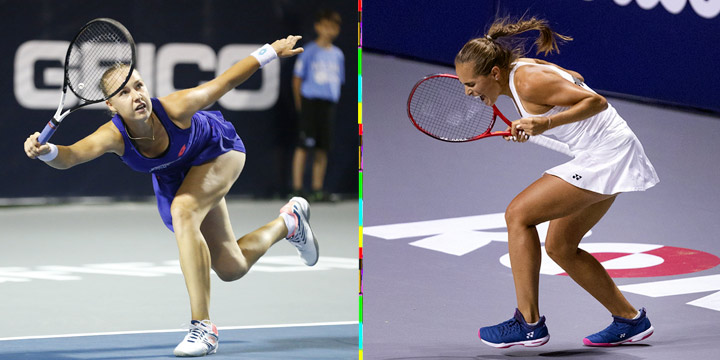 This week we caught up members of the Vegas Rollers, RedFoo and Monica Puig.

You only get one chance to make a first impression, especially in an entertainment mecca that is open 24/7 like Las Vegas. As the latest entry into the professional sports market in the southern Nevada desert, the Vegas Rollers made a lasting impression on the local sports community.

The Rollers were one of two new expansion franchises to join World TeamTennis during the 2019 season. They opened their home season at the Orleans Arena against the defending WTT Champions, the Springfield Lasers.

But it wasn’t just the competition that energized the near-capacity crowd who were loud, singing and dancing.  All while reacting to Rollers Assistant Coach RedFoo who held a microphone and emphatically yelled “What Time Is It?!” throughout the match.  Between Coach Foo, in-house hype man “SSSSnake,” and public address announcer Tony Cordasco, the lively gathering rarely had a chance to settle down, other than when it was time for one of the players to serve.

It was pure Las Vegas, and Foo said World TeamTennis is perfect for the Las Vegas tennis fan.

“The atmosphere – it was incredible,” said the coiled and kinky-haired former leadman from musical group LMFAO. “It was the Vegas entertainment world meets tennis, and it was an explosion!”

“This was huge for Vegas.  Vegas has never really had a tennis team.  They’ve got the hockey and now you’re gonna have all the tennis fans that Vegas really didn’t even know, and you rile them up and get ’em indoors in the air conditioning, and have the production value – the Vegas Rollers production value – it’s amazing.”

When you attend an event in Las Vegas, you expect world class entertainment — whether you are seeing magicians, Cirque du Soleil or a professional sporting event. The Rollers are there to put on a show, both on and off the court.

And what a show it was.

Saturday’s show began with a performance by “The Skating Aratas,” a roller-skating duo from Italy and Russia that performs nightly at Planet Hollywood’s “V – The Ultimate Variety Show.” From there, Rollers Boys and Girls dance team took over, with SSSSnake performing a self-written rap about the team, using names from the roster to connect his rhymes. And, of course, it wouldn’t have been Vegas without a remixed version of LMFAO’s Party Rock, exchanging the words for a tennis-themed anthem.

“I think Vegas will have, by far, the biggest energy,” Foo said. “I know as an away team we’ve gone to venues and our bench is louder than the crowd sometimes, because of the energy we bring as the Vegas unit. We know the Vegas Rollers, so we know that we’re representing the entertainment capital of the world when we go on the road. So now we’re back here … is like more energetic than some of the matches, because it’s Vegas.

Monica Puig made her World TeamTennis debut against one of tennis’ intriguing young faces, Anna Blinkova. Puig, the 2016 Olympic gold medalist in Rio de Janeiro, broke all three of Blinkova’s serves and won the set, 5-1.

Blinkova used her match against Puig as a learning experience. The young Russian was able to become a key contributor the Lasers in their 2019 championship season.

“I had such a good time and so much fun competing with and for the Las Vegas Rollers this season! The experience, the team, the people, it all added up to it being a week I will never forget,” Puig said. “In true Las Vegas style we had entertainment — Redfoo was always the highlight of the party! We put on a show and had fun, yet we competed hard and came together as a team. I can’t wait to do it all over again next year.”