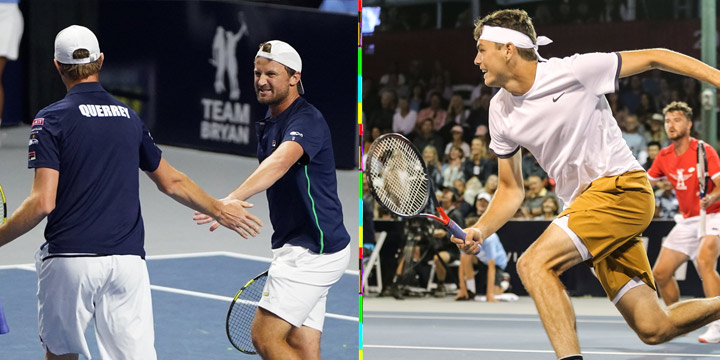 The 2019 home opener for the San Diego Aviators marked another colorful chapter for World TeamTennis at Omni La Costa Resort & Spa. Since the days of celebrity tennis tournaments during the tennis boom of the 1970s, the resort has been a Southern California tennis destination.

On paper, the highlight of the evening looked to be Men’s Singles featuring a rematch between Sam Querrey and Taylor Fritz. The highly anticipated rematch featured two of the biggest hitters in professional tennis and the capacity crowd was ready for the tennis equivalent of a heavyweight fight. Omni La Costa was buzzing as Aviators fans welcomed Fritz, who had grown up in nearby Rancho Santa Fe.

The Rollers took a commanding lead by winning Mixed Doubles and Women’s Doubles to take a 10-3 advantage. The Men’s Doubles was up and featured some of the biggest hitters in the game.

“Sam Querrey and Matt Reid obviously have massive serves, and Taylor Fritz also has a huge serve,” Aviators Jonny O’Mara said about his Vegas opponents and San Diego teammate. “Then there is little ol’ me who was rolling it in.”

O’Mara said there were many factors that helped him boost his level of enthusiasm.

“I was just so fired up and there was good reason for me to be fired up,” he said. “It’s the home opener in San Diego, Rod Laver is in the crowd and I’m playing against Querrey.”

Rod Laver is a tennis legend. He was the first male player to win the Grand Slam (all four tennis majors in the same year)  in 1962 and became the first person to repeat the Grand Slam in 1969. In 1971 he became the first professional tennis player to surpass the $1,000,000 mark in career prize money. He retired from the ATP in 1978, after having won an unprecedented 200 singles titles. He then spent the next two years playing for World TeamTennis San Diego franchise, the Friars. Laver is still a welcomed guest at all WTT events.

The combination of opening night, playing against one of today’s best player all under the watchful eye of tennis royalty had the Brit more excited than usual.

“It all went to my head a little bit,” O’Mara continued.

O’Mara and Fritz severed as San Diego’s emotional ying-and-yang, with O’Mara wearing his heart on his sleeve while his teammate stays stone-faced on the court.

“Vegas called a time out and [head coach] John Lloyd comes over. I’m still so fired up,” he said. “Fritz is rather calm because he is used to big situations.”

The Aviators had the lead and O’Mara was not going to surrender it. He remembers with clarity what he told his partner and head coach.

“I said to them, ‘This is a great moment for us to break and get into the match. We can win it here. Sam Querrey has a great serve, but he isn’t actually covering much of the net. So maybe if we try and return middle here, we have a chance to return win the point.’

“The whole time I’m saying this, John was nodding in agreement. But Taylor was looking at me with such a look of confusion. He just came out and said, ‘You can do that, but I’m just going to return cross.’”

O’Mara couldn’t contain his laughter during the time out and shouted at his teammate that’s why Fritz is a top 30 player and he’s still battling on the doubles circuit.

The match turned out to go the Aviators way as O’Mara and Fritz teamed for a 5-3 win.

“I made a great play and returned middle and won the point, which gives us match point,” O’Mara said. “Then Taylor returns a 130 mph serve and nails it cross court and hits the unbelievable winner for us.”