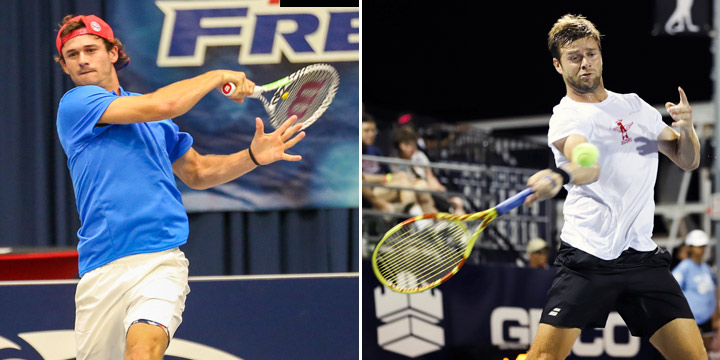 Tommy Paul was born in the suburbs of Philadelphia and despite moving to North Carolina as an infant, his parents made sure that passion for all things Philly ran deep. A professional tennis player shouldn’t eat the traditional Philadelphia cuisine of Scrapple and cheesesteaks (ordered ‘Whiz wit,’ of course,) too often. So Paul has other ways to declare allegiance to the America’s birthplace. His ATP bio says the Philadelphia Eagles are his favorite team. He often sports a flat-brimmed hat worn backwards featuring the logo of the Sixers or Phillies on the tennis court.

When Adrian Menendez-Maceiras was declared out for the season due to injury, Freedoms head coach Craig Kardon and GM Barbara Perry had to hustle to fill the spot.

Paul, who trains at the USTA Training Center in Orlando, Florida, was excited to answer the Freedoms call.

“I got a last-minute call and definitely was super pumped to get back home to Philly to be part of World TeamTennis,” Paul said.

The recent stretch of home openers have not been kind to the Philadelphia Freedoms, as the team has struggled to earn the season’s first win in the city of Brotherly Love. Tradition says that Philadelphia fans can be a bit rough on the home team when it’s not winning.

On July 15, 2019 the Freedoms opened the home season against the San Diego Aviators in front of a typical enthusiastic crowd on the campus of St. Joseph’s University.

While the final score of 25-11 didn’t reflect it, the Aviators-Freedoms match was quite the duel.  It could have been closer with many games in all five sets going to Deciding Point. World TeamTennis features no-ad scoring and the Deciding Point plays a big factor.  That was the difference as the Freedoms won 7 of 9 Deciding Points.

Paul’s match against Ryan Harrison fit the evening’s template, as the two Americans battled in an entertaining final contest of the evening.

Paul showed why many tennis experts consider him to be a next generation star in the ATP.  He took an early lead against Harrison.

Paul’s serves are what helped him early in the match.

Ask any Philadelphia sports fan, “What’s the Philly Special?” and you will immediately be referred to the trick play from Super Bowl LII. They might even act it out, most likely they will chastise you for asking such a silly question in the first place. Barstool historians will forever marvel at Doug Pederson’s gutsy call and the Eagles gutsier execution. Paul served up his own “Philly Special” against Harrison, highlighted by grind-it-out play and a big forehand to rally back from being down 4-3.

“Tommy Paul came to play [that night,] Stevenson continued. “His big serves with the slice was a smart play.”

The two eventually battled to a tiebreaker with Paul earning the first minibreak. Paul kept the momentum going and overcame some early nerves to post the 5-4 come-from-behind win to close out the match.

“WTT was a really cool experience as it’s great playing in a team environment,” Paul said. “Especially back home in Philly and having my family come out.”