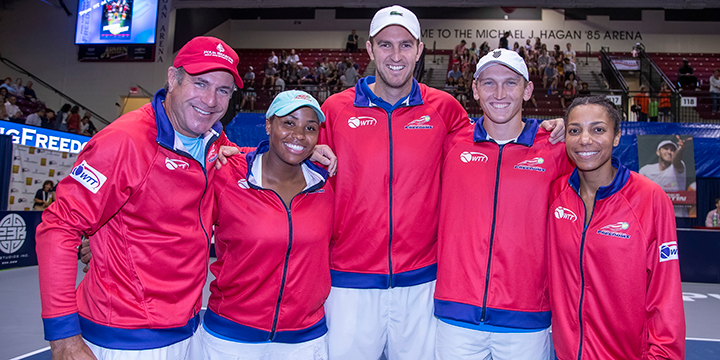 PHILADELPHIA – The Philadelphia Freedoms came out of the gates strong to open the 2019 WTT season, winning seven of their first eight matches. That streak was good enough to earn the top spot in the standings and secure the No. 1 seed in the World TeamTennis Playoffs for the second year in a row.

Philadelphia fell short of their ultimate team goal, losing in the 2019 semifinals, but they gave the home fans plenty to cheer about winning six of their seven home matches.

Freedoms fans were treated to exciting WTT action during the regular season thanks to fan favorites Taylor Townsend, the 2018 WTT Female MVP; Fabrice Martin, the 2016 WTT Male Rookie of the Year and Raquel Atawo, the 2019 WTT Female of the Year.

Those three would serve as the foundation of the team as Coach Craig Kardon and General Manager Barbara Perry would see the Freedoms second male on the roster become a revolving door throughout the year.

Kardon, who captured WTT Coach of the Year in 2018 and 2019, had plenty of assistance from his players in helping whoever came in feel like a part of the team after Adrian Menendez-Maceiras went down with an injury early in the season.

“Taylor, Fabrice and Raquel were amazing this year,” Kardon said. “They played great and welcomed all the new faces we had throughout the season.”

The Freedoms returned home after a hard-fought loss to the defending champion Springfield Lasers and captured their home opener by soundly defeating the San Diego Aviators.

Philadelphia would take the momentum from the win against San Diego and grind out six consecutive victories before eventually falling to host Orange County in a match decided by a Super Tiebreak.

The loss to Orange County would just seem like a speed bump as Philadelphia got back on track winning four of their final five matches.

After falling to New York in their home finale, the Freedoms were hoping for a different result when they faced off against their Gotham rivals two days later in the WTT semifinals in Las Vegas. Unfortunately for Philadelphia, the change in venue did not help in the outcome as the Freedoms fell again.

Despite coming up short in 2019, the Freedoms hope to ride their success into next year.

In the home opener, the Freedoms won all five sets with the Mixed Doubles team of Atawo and Martin setting the tone winning the opening set 5-2 en route to the convincing win.

Philadelphia would earn wins in Mixed Doubles, Women’s Doubles and Women’s Singles but would need extended play to earn the 23-15 win. Despite leading throughout, the Freedoms dropped the final set of the evening leading to Extended Play.

In a matinee affair, the Freedoms rolled to their third consecutive win at home thanks in large part to  Townsend who earned wins in Women’s Singles and Women’s Doubles pairing with Atawo.

On the second of a home and home against Orlando, the Freedoms defeated the Storm for a second consecutive time thanks in large part to winning four of the five sets. Krueger’s victory in Men’s Singles gave the hosts a 10-7 lead en route to the 23-15 win.

Playing at home for the first time after spending a week on the road, the Freedoms returned to the friendly confines of Hagan Arena and came away victorious thanks in large part to 2019 WTT Female MVP Atawo who teamed up with Martin in Men’s Doubles and Taylor Townsend in Women’s Doubles to earn key victories in both events.

The Freedoms stayed unbeaten at home with a hard fought 22-20 win over defending champion Springfield in match that paralleled the 2018 finals. After Springfield pulled within 1 at 21-20 during extended play, Townsend showed why she was the 2018 WTT Female MVP by holding serve to close out the match.

The regular season finale did not go as planned for the Freedoms who suffered their first home loss. Trailing 15-8 after three sets, the tandem of Townsend and Atawo got Philadelphia to within 3 at 16-13 heading into the final set but Kirsten Flipkens ended any hope of a Philadelphia comeback defeating Townsend 5-3 in Women’s Singles to close out the match for New York and clinch a playoff berth for the Empire.