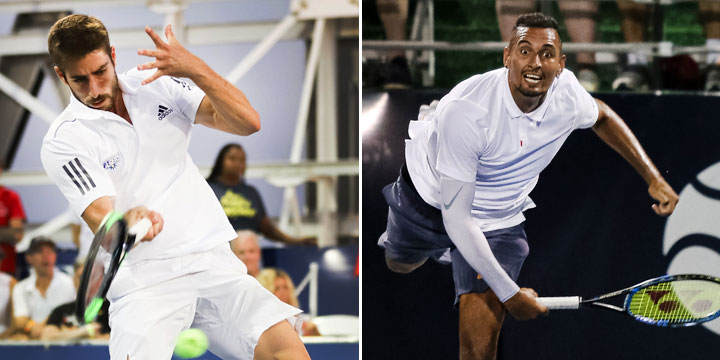 This week, WTT Broadcaster Jason Knapp made his pick, which took place during the Springfield Lasers vs. Washington Kastles match on July 27, 2019 on the rooftop at Union Market in Washington D.C.

“For me the most memorable performance of the WTT 2019 Regular Season was the last set of the Lasers vs. Kastles match. Nick Kyrgios battling rising star Enrique Lopez Perez was a lot of fun,” Knapp said. “Engaging fans on the rooftop and an underhanded serve on match point! His play fit that outrageous tennis setting and spectacular view.”

With a four game lead, Kyrgios took on Lopez Perez in what turned out to be a very competitive finale to the season. Both players held serve with little resistance most of the set, until the eighth game. Returning up 4-3, Kyrgios earned three match points on Lopez Perez’s serve. But with the match on the line, the Laser saved all of them to send the set to a tiebreak.

Lopez Perez then got ahead in the breaker, taking the early advantage with a mini-break and stealing the set with two forehand winners, 5-4(2) to force the match into extended play. Then down 19-22, Lopez Perez held serve to ratchet up the tension in Kastles Stadium and give Springfield a glimmer of hope.

But any chance of a late Springfield comeback was quickly dashed by Kyrgios in the next game. In classic form, the Kastles superstar fired two aces and hit an underhand serve to clinch the victory, 23-20.

“It was super exciting to get out here,” said Kyrgios afterwards. “I love playing for the team and hope next year I can play more. I love team events. It’s the way tennis should be played. The venue is amazing. The fans are awesome.”