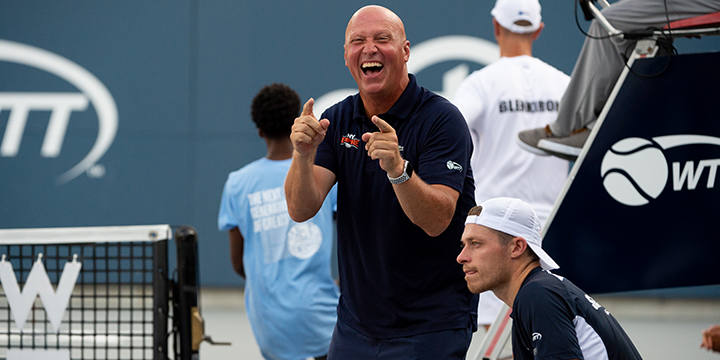 A stunning turnaround made the 2019 World TeamTennis season a historic one for the New York Empire.
First-year head coach Luke Jensen and the efforts of WTT Male MVP Neal Skupski led the Empire to its best season in franchise history. As the team qualified for the playoffs for the first time and finished as the league runners-up.

New York finished 8-6 overall after bouncing back from a slow start, where it lost three of its first four matches. They clinched the last of four playoff spots with a 21-16 against the Philadelphia Freedoms on the road in the final match of the regular season on July 31.

Facing a Freedoms team that was undefeated at home, the Empire never trailed in the regular season finale, scoring a 21-16 victory to secure the first playoff berth in the team’s four-year history.

Second-year Empire player Kirsten Flipkens, a former Wimbledon semifinalist who was selected by the Empire with the first overall pick in the 2019 WTT Draft, sealed history for her team with a win against former league MVP Taylor Townsend in the deciding Women’s Singles.

“I was just happy to be part of this team,” said Flipkens. “I knew going into the last set the pressure was going to be on me and I thought I handled it well.”

New York’s momentum continued into the playoffs, as the No. 4 seeds followed that up with another win against top-seeded Philadelphia in the semifinals at Orleans Arena in Las Vegas, 24-18.

Though New York fell short of its ultimate goal of winning the King Trophy, falling in the championship to the Springfield Lasers, 20-19, despite leading after four sets, it was a stunning turnaround for the team which finished last in the WTT Standings in 2018, with just three wins to its name.

Skupski, a stalwart of the team in its four-year existence, even in the lean years, was rewarded for his efforts with the league’s Male MVP award.

The Liverpool native partnered with Maria Jose Martinez Sanchez to be the winningest mixed doubles pair in the league, and also ranked fifth in individual winning percentage in Men’s Doubles.

“It’s incredible to lead this team to the playoffs for the first time in team history,” Jensen, following the team’s regular season-ender in Philadelphia.

“I was very blessed when I was given the opportunity by the Empire…who thought this was a good fit.”