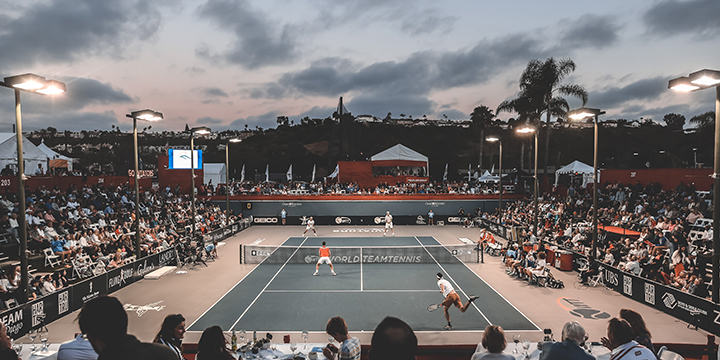 CARLSBAD, Calif. – The 2019 San Diego Aviators fought through a mid-season slump and finished strong to end the season in third-place and secure a spot in the World TeamTennis Playoffs in Las Vegas.

San Diego opened the season with a four-match road trip to the East Coast, and thanks to stellar play from Ryan Harrison and his sister-in-law Christina McHale, the Aviators scored wins over the New York Empire, the Washington Kastles and Orlando Storm.

The Aviators returned to Carlsbad with a 3-1 record, but stumbled against Sam Querrey and the Vegas Rollers in their home opener at the Omni La Costa Resort & Spa. The following evening, the Aviators fell on the road to the Orange County Breakers.

San Diego came back home and regrouped for one of their biggest wins of the season as they knocked off the previously unbeaten Springfield Lasers in Extended Play.

However, after losing to Philadelphia for the second straight time and dropping a rematch against the Lasers in Springfield, Mo., the Aviators season record had fallen to 4-5.

King Trophy here we come. 🏆The team has arrived in Vegas and ready to take on the @SGFLasers at 4 pm PDT! 💥

As the Aviators hopes to reach the WTT Playoffs began to cloud, 17-year-old Amanda Anisimova came to the rescue, leading San Diego to wins over New York and Orange County. San Diego then acquired the services of James Ward from Orange County.

With Ward in the line-up, along with Anna-Lena Groenefeld, Arina Rodionova and Jonny O’Mara, the Aviators suddenly became the hottest team in World TeamTennis as San Diego finished the season with five consecutive wins to clinch a semifinal playoff spot.

“Playing World TeamTennis with the Aviators this summer was an amazing experience. The team had great chemistry and we really pulled together in the second half of the season to qualify for the WTT Playoffs,” said O’Mara, a 24-year-old doubles specialist who made his WTT debut this season.

“I really enjoyed the camaraderie with Coach Lloyd and all of my teammates,” O’Mara added. “Getting the opportunity to play on a WTT team in such a beautiful place like San Diego is definitely one of the highlights of my year.”

Despite a nail-biting semifinal loss in the WTT Playoffs, Aviators fans were thrilled with the 2019 Aviators season as they witnessed the start of a new era for WTT. With the new court color and two new expansion teams, all indications point to a very bright future for the league.

“We came up just a bit short in the semifinals, but it was an incredible season. We had so many players step up and make key contributions in our run to the WTT Semifinals,” said Aviators Coach John Lloyd.

“This team had a lot of fight and determination when they went on court. Even when we were 4-5, they kept fighting and really came together to win five straight matches at the end of the regular season.”

Sunday, July 14 — San Diego Aviators def. New York Empire, 23-11
In the opening set of the match, Kaitlyn Christian and Christina McHale gave the Aviators a sparkling start to the 2019 season in New York with a dominating 5-0 win in Women’s Doubles over Maria Jose Martinez Sanchez and Kirsten Flipkens of the Empire.

Friday, July 19 — Vegas Rollers def. San Diego Aviators, 23-15
The expansion Las Vegas Rollers spoiled the Aviators home opener before a capacity crowd in Carlsbad, Calif., as they jumped out to an early 10-3 lead and went on to upset San Diego. Sam Querrey led the Rollers with a 5-4 victory over Taylor Fritz in men singles.

Sunday, July 21 — San Diego Aviators def. Springfield Lasers, 24-20 (EP)
The Lasers arrived in Carlsbad in first-place with a spotless 5-0 record, but Arina Rodionova led the Aviators to a thrilling win over the defending WTT Champions in Extended Play with key wins in Women’s Singles and Women’s Doubles.

Wednesday, July 24 — Springfield Lasers def. San Diego Aviators, 22-17
The Aviators season record dropped to 4-5 as they fell to the Lasers in Springfield, Mo. Darian King gave San Diego an early lead with a 5-4 victory over Enrique Lopez Perez in Men’s Singles, but Springfield rallied with wins in Men’s Doubles and Mixed Doubles.

Friday, July 26 — San Diego Aviators def. Orange County Breakers, 22-14
After losing to the Breakers the previous week, the Aviators rebounded with a home victory over Orange County. Darian King defeated James Ward in Men’s Singles and teamed with Jonny O’Mara to win Men’s Doubles to lead the Aviators to their sixth win of the season. Amanda Anisimova, playing in her second straight match for San Diego, overcame Nicole Gibbs to close out the victory.

Tuesday, July 30 — San Diego Aviators def. Washington Kastles, 25-7
It was a night of celebration for the Aviators, who won their fourth-straight match to clinch a spot in the WTT playoffs. San Diego, led by Jonny O’Mara and Anna-Lena Groenefeld, swept all five sets against the Kastles in one of the most dominating performances of the 2019 World TeamTennis season.

Wednesday, July 31 — San Diego Aviators def. Orlando Storm, 21-18
The Aviators get past the Storm in their regular season finale at Omni La Costa Resort & Spa to end the 2019 WTT campaign with an impressive five-match win streak. James Ward, a key player on San Diego’s roster, edges Evan King 5-4 in Men’s Singles to clinch the victory for the Aviators. San Diego closes the regular season in third-place in the WTT Standings with a 9-5 record.

Friday, August 2 — Springfield Lasers def. San Diego Aviators, 21-19 (WTT Semifinals)
The Aviators season came to a close with an exciting finish in the WTT Semifinals as they drop a narrow decision to the Lasers in Las Vegas. With the Aviators trailing Springfield 16-15 heading into the final set, Olga Govortsova of the Lasers rallied from a 4-2 deficit to edge San Diego’s Arina Rodionova 5-4 in Women’s Singles.