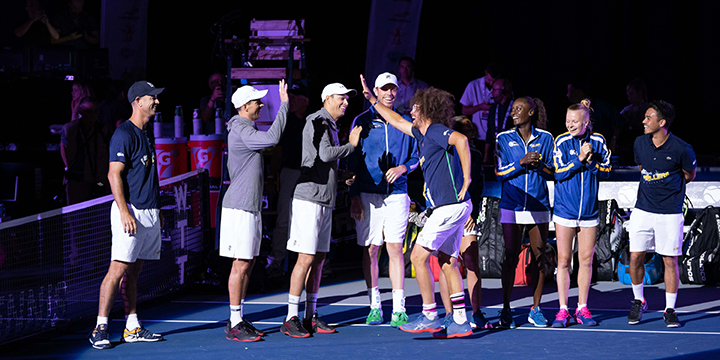 LAS VEGAS — Coach Tim Blenkiron wasn’t sure what to expect in the Vegas Rollers’ inaugural season in World TeamTennis.

He knew he had talent, he knew had the backing of a tennis-savvy management team, and he was well aware of the exuberant tennis community in the Entertainment Capital of the World.

How it would all come together was an entirely different story.

“I don’t know if my mind could have grasped what it was gonna be, I’m not really creative like that” Blenkiron said. “You never know how it’s gonna turn out, especially the first season. But it far exceeded my expectations.”

Vegas finished the season 6-8, tied for fifth place. The top four teams made the playoffs, which saw the Springfield Lasers repeat as champions, ironically with a borrowed player from the Rollers, Evan Song.

“If we hit 50 percent of that we’re in the playoffs,” Blenkiron said. “We were in that competition to win it. We were around in every single match which was cool, it made it exciting.”

But it’s not as if the Rollers didn’t make things interesting, down to the final week of the regular season.

They defeated the Orlando Storm in the home finale to remain alive in the playoff hunt, only to be eliminated in their season-finale at Springfield.

Despite missing the postseason, team officials counted the first season in the league as a win thanks to a tremendous reception by a town that had just welcomed the NBA Summer League, is enjoying the Las Vegas Aces’ run to the WNBA playoffs, and is anxiously awaiting the Vegas Golden Knights’ third season in the NHL.

“Vegas is absolutely perfect for World TeamTennis,” WTT founder Billie Jean King said during the night of the championship match, which was held at the Orleans Arena, the Rollers’ home venue. “Vegas should be the best because of the music and the entertainment they have here every day of the year. And they have the best people, so it’s just amazing. It’s exactly what we want World TeamTennis to be. It’s amazing when you look at Vegas and how it’s developed over the years.”

But winning and losing aside, the Rollers seemingly emerged from their first season differently than other teams. They became a family, and one with the community.

In fact, as the tennis world settled into Flushing, New York for the U.S. Open, Monica Puig texted into a group message that the Rollers family needed to have a dinner together while everyone was there.

“All things considered it couldn’t have gone much better,” Blenkiron said. “The only thing that could have gone better was if we made the playoffs.”