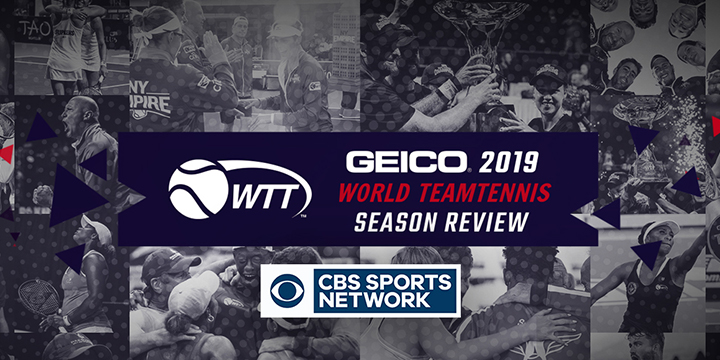 Held for the first time just off the famous Las Vegas strip in the entertainment capital of the world at Orleans Arena this past weekend, the WTT Playoffs featured teams from Springfield (Mo.), Philadelphia, San Diego and New York all vying for the iconic King Trophy, named after WTT co-founder Billie Jean King, who was on hand to present it to the winners.

The 2018 WTT champion Springfield Lasers repeated as champions as they came back to post a dramatic 20-19 win over the New York Empire thanks to the heroic doubles play down the stretch by Las Vegas hometown hero and Lasers’ player Evan Song and Finals MVP Robert Lindstedt.

“The 2019 World TeamTennis season will go down as one of the biggest growth years in the league’s long and storied history,” said WTT CEO Carlos Silva. “From the addition of two new franchises, to our new television and digital partners, we are thrilled that that the season culminated in such dramatic fashion with the successful debut of our new playoff format and host venue and look forward to what is sure to be terrific television recapping the season by our partners at CBS.”

The @nyempiretennis 🗽 and @SGFLasers 💥 face off for the King Trophy 🏆. Will Springfield repeat? Can New York keep its Cinderella season going? Tune in right now and find out -- only on @CBSSportsNet! 📺🎾🏆 #WTTPlayoffs #wtt2019 pic.twitter.com/FSI8EpTkPg

World TeamTennis on CBS debuted on July 21, featuring the Philadelphia Freedoms at Vegas Rollers. The telecast delivered 409,000 viewers, making it the most watched match in the league’s 44-year history. The match was the first for World TeamTennis on new broadcast partner CBS, which also included 15 matches on CBS Sports Network during the leagues three-week season and playoffs. The league also saw a spike in traffic related to the Freedoms-Rollers match delivering 175,000 video plays across the WTT channels (Social, Website, Video Partners) over the three-day period (before, day of, after) which included highlights, promos, features and other content.

Leading sports streaming service ESPN+ streamed 18 matches exclusively during the 2019 WTT season, with an additional 24 streamed on both ESPN+ and WTT.com.

World TeamTennis’ year-end awards were announced before the semifinals on Friday. New York’s Neal Skupski and Philadelphia’s Raquel Atawo were named WTT’s Male and Female Most Valuable Players presented by Forevermark, and each received a one-carat diamond from Forevermark. San Diego’s James Ward (who was acquired on July 28 from the Orange County Breakers) and the Orlando Storm’s Whitney Osuigwe earned WTT’s Male and Female Rookie of the Year honors. Philadelphia’s Craig Kardon won WTT’s Coach of the Year for the second consecutive season in guiding the Freedoms to a second consecutive regular season title. Both Skupski and Atawo will be presented with a unique piece of artwork by acclaimed pop artist Blake Jamieson, who works with celebrities, professional athletes, and tech founders to create vibrant, one-of-a-kind works of art (https://blakejamieson.com/)

Each of WTT’s eight teams played 14 regular season matches in 2019 – seven home matches and seven away matches – for a league-wide total of 59 regular season matches. WTT introduced professional team tennis to the world in 1974, with King famously serving as its co-founder. WTT is one of five active U.S. pro sports leagues which has been in operation for over 40 years, along with the NFL, NBA, NHL and MLB. For more information on World TeamTennis, please visit www.wtt.com.