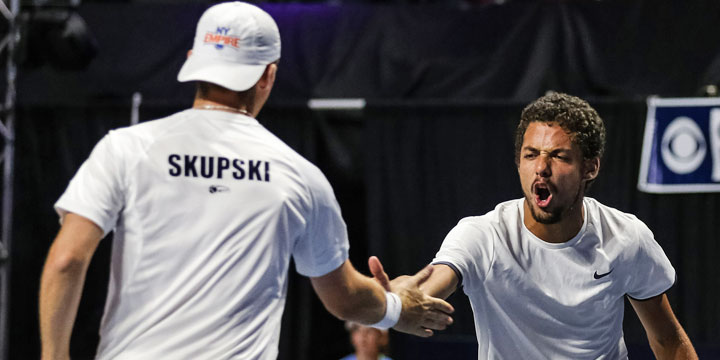 But when veteran Mardy Fish went down with a hamstring injury just two games into his Men’s Singles set, Blanch was ready to go.

Call it an Empire state of mind.

Blanch closed out the Men’s Singles set with a 5-4 win, then teamed with Neal Skupski to take Men’s Doubles, 5-4, to help fourth-seeded New York defeat the top-seeded Freedoms, 24-18, and move into Saturday’s championship match against the defending champion Springfield Lasers.

It was New York’s second straight victory over the Freedoms, after it closed the regular season with a playoff-berth clinching win in Philadelphia on Wednesday. That was one night after being blown out at home by the Freedoms.

“I just tried to focus and when I stepped on the court, I knew a great part of it was mental and I just tried to deliver,” Blanch said. “The first night we played them at home, they kind of blew us away, we weren’t really ready. In Philly, I think we played a great match and we came into this match confident that we could win it.”

After Fish built a 2-0 lead over Philadelphia’s Mitchell Krueger, a pulled hamstring forced him from the match. Krueger quickly took the next two games before he and Blanch ended up in a tiebreaker for the set.

“He knew going in that this was possible, that’s why he’s here, it’s to go out and do a job” New York coach Luke Jensen said. “All Mardy did was hand off the baton and say, ‘here’s your lead, go to it’. And the confidence that Mardy instilled into Ulises was huge and then he carried it through.”

Blanch’s set victory pushed New York’s lead to 10-6 at the time after Skupski and Maria Jose Martinez-Sanchez gave the Empire an early lead when they made quick work of Philadelphia’s Fabrice Martin and Raquel Atawo, 5-2, in Mixed Doubles.

Both Men’s Doubles teams held serve through the first eight games, forcing a tiebreaker, where again both teams held their serve until it was 4-4. Playing near the net, Blanch’s shot slipped past Martin and Krueger and in front of the Freedoms bench for the set, giving the Empire a 15-10 lead.

New York’s Kirsten Flipkens and Philadelphia’s Taylor Townsend also went to a tiebreak in Women’s Singles. Townsend opened the set with a service break, then held serve to go up 2-0. But Flipkens responded by winning the next three games to pull ahead 3-2. The two exchanged wins over the next three games to force the tiebreak, where Townsend battled back from a 3-1 deficit and survived double-set point to secure a 5-4 win.

In the final set, Townsend and Atawo battled back from a 3-0 deficit in Women’s Doubles and cut Flipkens and Sanchez’s lead to 4-3 but couldn’t get any closer to forcing extended play. Flipkens and Sanchez took the set, 5-3, to finish off No. 1 Philly.

“I just tried to do everything I could, I didn’t really play well in the doubles, but they were the better team today,” Townsend said. “We played them three (matches) in a row so it gets easier each time. We beat them the first night very convincingly. The next day they beat us convincingly. I think they knew what to expect.”