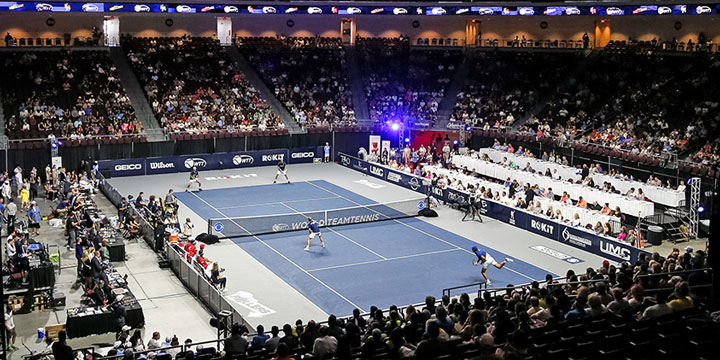 CARLSBAD, Calif. – World TeamTennis’ 44th season has been whittled down to four semifinalists competing in the 2019 WTT Playoffs, held for the first time in Las Vegas at the Orleans Arena with the semifinals taking place on Friday, with the WTT Final to follow on Saturday.

The teams vying to hoist the King Trophy – the iconic moment symbolic of winning the World TeamTennis championship – include the regular season champion Philadelphia Freedoms, two of the league’s past three champions – the 2018 WTT champion Springfield (Mo.) Lasers and 2016 WTT champion San Diego Aviators – and the New York Empire, making its first ever appearance in the WTT Playoffs. These teams finished in the top four (of eight teams) in WTT’s regular season standings.

Below is a breakdown of World TeamTennis’ semifinal matchups and playoff schedule:

Franchise history in the WTT Final:

Franchise history in the WTT Final:

Each of WTT’s eight teams played 14 regular season matches in 2019 – seven home matches and seven away matches – for a league-wide total of 59 regular season matches. WTT introduced professional team tennis to the world in 1974, with Billie Jean King famously serving as its co-founder. WTT is one of five active U.S. pro sports leagues which has been in operation for over 40 years, along with the NFL, NBA, NHL and MLB. For more information on World TeamTennis, please visit www.wtt.com.