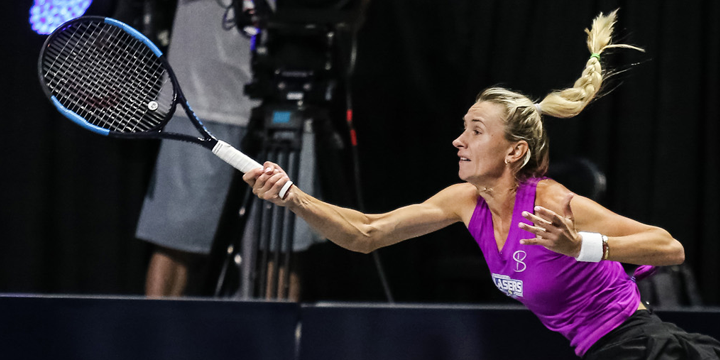 LAS VEGAS – Springfield coach John-Laffnie De Jager wanted his Lasers going into the final set of their World TeamTennis semifinal against the San Diego Aviators on Friday no worse than one point behind in the match.

Thankfully, for the defending champs, they led by one.

San Diego’s Arina Rodionova led 4-2 against Springfield’s Olga Govortsova, who rallied to win back-to-back games, force a tiebreak and take the set, 5-4, and hand the Lasers a 21-19 victory and berth into Saturday night’s championship match.

“Arina played very well, she made it tricky for us; she played ugly tennis but that’s what she needed to do, Olga likes it when the ball comes on to her racquet,” De Jager said. “(Olga) made it difficult for herself. I told her ‘you see the little bit of hair that I have left, I’d like to keep it.’ She came out and she really played well.”

The final set opened with five consecutive service breaks before Rodionova, the 2011 Female Rookie of the Year and WTT Finals MVP, held serve and seemingly seized momentum. But Govortsova, who is playing in just her second WTT season, won the final two games and then scored four of the final five points in the tiebreak to clinch the win.

“She started really, really well,” Govortsova said. “She was getting back every one of my serves. I had a couple of bad games, I felt like I didn’t go for my shots. I feel like I couldn’t put away those volleys, and it felt like she was getting everything back. I just relaxed and started playing my game.”

The Lasers opened the match with a 5-3 win in Men’s Doubles as Robert Lindstedt and Evan Song outlasted James Ward and Jonny O’Mara. Lindstedt and Song were able to battle back from love-40 in the seventh game to hold serve, and then wrapped things up by breaking the Aviators’ serve.

The Aviators returned the favor in the second set, which saw Rodionova and Anna-Lena Groenefeld win the final three games to top Springfield’s Govortsova and Abigail Spears. After falling behind 3-2, Rodionova and Groenefeld broke serve twice to close out the set strong, tying the match 8-8.

Lindstedt and Spears appeared to have secured momentum for the Lasers by winning the last four games of their mixed doubles match against Groenefeld and O’Mara to take the third set, 5-2, and give Springfield a 13-10 lead.

Ward and Song held serve over the first seven games in Men’s Singles. But it was Ward overpowering Song for a service break in the eighth that clinched the set and brought the Aviators within one point heading into the final set.

Song – who reached a career-high ATP singles ranking of 314th, is currently ranked 335th and played with Vegas during the regular season – joined the Lasers earlier in the day to replace Enrique Lopez Perez, who injured his hand after the team arrived in Las Vegas on Thursday.

“It’s tough for somebody just to come in, on a new team and do well,” De Jager said about Song. “The three games he got in Men’s Singles was key for us.”

The second-seeded Lasers have now won three straight matches since snapping a four-match losing skid. No. 3 seed San Diego closed the season with five straight victories, with their last loss coming at Springfield.

“It was a tremendous fight, we came back so well in the last two sets,” San Diego coach John Lloyd said. “Today though, if you analyze the match, it was really a case of the Lasers playing the big points better than we did.”