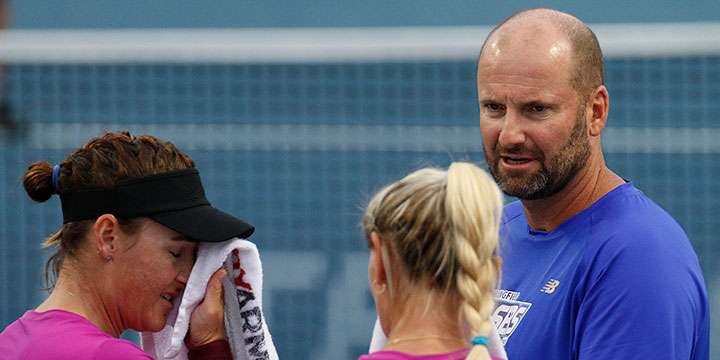 But the Springfield Lasers coach is quick to point out his favorite time of the year.

“For me, this is my three favorite weeks of the year, I love it,” said De Jager, who has spent the last 20 years as either a player or coach in World TeamTennis. “I love team environment.”

As he should, considering his Lasers are the defending champions and are set to open defense of their title in Friday’s early semifinal against No. 3 seed San Diego at Orleans Arena, which is situated less than 10 minutes from Las Vegas Boulevard. The winner will face the late semifinal winner between top-seeded Philadelphia and No. 4 seed New York in Saturday’s championship match.

The Lasers have a relatively new look to their lineup from last year, returning only nine-year WTT veteran Abigail Spears from the 2018 championship squad. Joining Spears are Russia’s Anna Blinkova, Olga Govortsova from Belarus, Robert Lindstedt of Sweden, and Spain’s Enrique Lopez Perez.

De Jager said he likes his team’s chances to repeat, thanks to one simple ingredient he’s learned in 13 years as a coach: “You gotta bring the fun into it.”

The 46-year-old veteran who has represented South Africa in the Olympics and Davis Cup said he’s seen players in World TeamTennis take things far too serious.

“My philosophy is to create a great team environment and have fun; if you don’t do that, you can so quickly get frustrated with each other, get irritated with each other,” he said. “It’s such a unique format, any team can win. The traveling is a lot, so people get tired. So many teams, toward the last week, get tired. And that’s when teams get irritated. This year’s been great. We’ve been fortunate.”

Spears, who is playing her third straight year and fourth overall for Springfield, agreed with her coach.

“I definitely look forward to this time of year,” she said. “The team part of it, that’s something I always look forward to, it’s a way more relaxed atmosphere. There’s music, we can dance, we can cheer, we can scream.”

And, they can play.

The Lasers extended their win streak to 13 straight victories dating back to last season, by opening the campaign 5-0. They improved to 7-1 before losing four straight, then closed the season with wins over Orange County and Vegas to build momentum heading into the playoffs.

“If you don’t win the important points you get yourself in a big hole and you lose matches,” De Jager said. “The format is so unique for me because you’ve got to be ready.”

Back on track with his team re-energized for the playoffs, De Jager would love nothing more than to bring a second-straight title to a community that has embraced the Lasers.

After winning the King Cup last year, De Jager returned to Springfield for two weeks and saw the impact his team had on the town of roughly 170,000 people. He was invited to throw out the first pitch at a home game for the Springfield Cardinals, the Double-A affiliate for the St. Louis Cardinals; he was honored during a city council meeting; and, he found himself being stopped randomly in public by fans thanking him for bring the title to Springfield.

“The thing that a lot of players don’t understand is these owners and communities that own World TeamTennis teams – that’s their Grand Slam,” De Jager said. “That’s their biggest thing of the year, so it’s massive for them. You can see the show they put on, the publicity that they’re getting on CBS and ESPN and ESPN-plus is amazing. Everybody around the world can watch it now. You see the names that are playing, it’s awesome.”