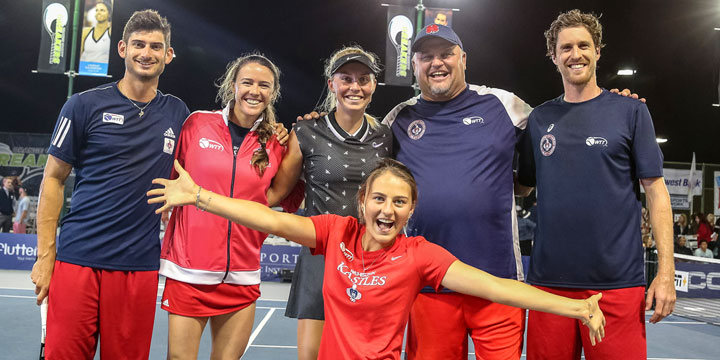 Starting a lineup that included no player from their opening day roster, the Washington Kastles earned just their third win of the 2019 campaign with a 25-15 win over the Orange County Breakers to close out the season for both teams.

The New York Empire earned the fourth and final playoff spot while the Breakers and Kastles were in the middle of their second set, ending Orange County’s prospects of making the playoffs regardless of if they defeated Washington in Wednesday’s match.

Just two days ago when the two teams squared off in a rescheduled match, the Breakers swept the Kastles and won all five sets, but the Kastles flipped the script in the season finale.

“Luckily we’re all pretty close friends,” former USC standout Kaitlyn Christian said. “This has been a tough season because we’ve had probably 20 different players on our team, but we just brought good energy today and had a lot of fun. Played some pretty good tennis so it was very exciting.”

Marcus Daniell and Christian were heading towards another 5-1 defeat at the hands of 2017 WTT Female MVP Andreja Klepac and Luke Bambridge, however the Kastles duo erased a 1-4 deficit to mount a comeback and win 5-3 in a tiebreak. From there, Washington’s momentum continued as Christian and Ashley Kratzer won 5-4 in a tiebreak against Nicole Gibbs and Klepac.

Kratzer, a Newport Beach resident, had a successful season debut by winning 5-2 in the tiebreak over Gibbs to give the Kastles a comfortable 20-13 lead heading into men’s doubles. By popular demand, 2019 NCAA singles champion Petros Chrysochos was inserted into the last set of the season in doubles with Bambridge, however the Breakers duo fell 5-2 against Daniell and Hiltzik.

“I think it was an overall good season. We gave it our all and a special thanks to our owner Eric (Davidson) and our general manager Allen (Hardison). And to our whole team, our coach (Rick Leach),” Klepac said.

“We had so much fun during the season in all the matches, and hopefully we will be back next year. It’s an amazing place to play here, and the Orange County Breakers next year will come back even stronger!”

After winning just seven games the previous night against the San Diego Aviators, the Kastles rebounded with a strong finish to the season.

The World TeamTennis playoffs begin Friday in Las Vegas at the Orleans Arena, with the third-seeded San Diego Aviators facing the second-seeded Springfield Lasers at 4 p.m. PT/7 p.m. ET, followed by the fourth-seeded New York Empire facing the top-seeded Philadelphia Freedoms at 7 p.m. PT/10 p.m. ET. Both matches, as well as Saturday’s final, will be live on the CBS Sports Network.