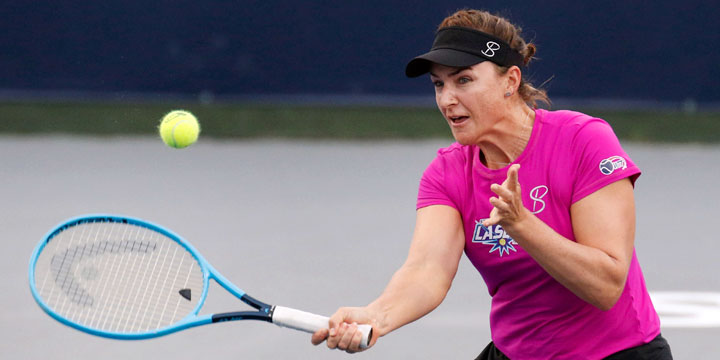 SPRINGFIELD, MISSOURI — Outside at the stadium court or inside in front of metal bleachers, it didn’t really matter. The Springfield Lasers were just a little bit better than the Vegas Rollers Wednesday night.

Springfield weathered a 30-minute rain delay and a late rally from the Rollers to win a Supertiebreak and take a 21-20 decision in the regular season finale at Cooper Tennis Complex. The defending WTT champions now head to Las Vegas and the WTT Playoffs Aug. 2-3.

“This has been our season: we dominate chances, mess up opportunities and get ourselves in a tough spot,” Lasers coach JL de Jager said. “It was great we got out of it tonight and it’s always good to end the season on a winning note. We’re undefeated at home this season and that means a lot to us.”

Vegas’ Matt Reid and Evan Song beat Robert Lindstedt and Enrique Lopez Perez 5-3 in Men’s Doubles, the final set of the night, to knot the overall score at 20. and force the Supertiebreaker. Momentum wasn’t necessarily on the Rollers’ side, though. In fact, Lindstedt appreciated the opportunity to keep playing.

“It’s great. You get a chance to do right what you (messed) up before,” the lanky Swede said. “Kiki really stepped up, served well and hit his spots. That Supertiebreaker went pretty smooth.”

Lindstedt, playing just his fourth match for Springfield as the sub for Jean-Julien Rojer, teamed up with Abigail Spears to win Mixed Doubles, 5-2. That set was interrupted twice, with Springfield leading 4-0. First lightning flashed across the sky north of the stadium, forcing the teams to clear the court. Play briefly resumed before rain started falling, forcing everyone indoors.

The transition took nearly 30 minutes, but it wasn’t enough to throw Lindstedt and Spears off their game. The two have quickly found their rhythm, as have Lindstedt and Lopez Perez.

“I’ve played enough tennis, I know what it’s like,” Lindstedt said. “I’ve known Abi for quite a long time and have played against her. Kiki I had never seen play, but it’s easy when someone has a cannon for a serve like he does. Then you don’t have to gel so much.”

Spears and Olga Govortsova made an early 3-1 lead stand up in 5-3 women’s doubles win. The Lasers broke Harriet Dart’s serve to get that lead, but Vegas managed a break of its own to level things at 3. A second break of Dart, though, put the Lasers back in control and Spears served the winning point.

Vegas won both singles events. Asia Muhammad handed Govortsova her first loss in four matches, winning 5-4 (5-4) on the indoor court. Song fell behind Lopez Perez 2-0 in men’s singles, the first set of the night, but got a crucial break and rallied back for a 5-3 win.

Springfield, the second seed in the playoffs, gets one day off before they face No. 3 San Diego at 4 p.m. Pacific Aug. 2 in the WTT Semifinals. If the Lasers hope to make it back-to-back King Trophies, their coach says they’ll need to break one particularly bad habit.

“We’ve been very bad this year when we break, then we don’t hold,” de Jager said. “We’re not good at that and we’ve got to improve that. In World TeamTennis when you break and then hold, that’s a two-game swing right there. In the finals we’ve got to be better at that.”

de Jager was complimentary of the Springfield crowd, which didn’t thin out much after the rain delay.

“The crowd was great tonight,” he said. “Nobody really left after the rain, so I was happy about that. And they love the supertiebreaker. They’ll go home and remember the excitement of it.”

Vegas assistant coach Redfoo helped keep some of those fans around. Best known as one half of the musical duo LMFAO, Redfoo stayed to sign autographs and take pictures with a long line of young fans after the match.

The Lasers honored longtime Springfield-Greene County Park Board employee Cindy Jobe. Among the many jobs she’s held is DJ at the Lasers matches. Jobe is retiring after 34 years with the Park Board, which owns the Springfield franchise.

Springfield heads to Las Vegas to defend its title in the WTT Playoffs, Aug. 2-3 in Las Vegas. The second-seeded Lasers face No. 2 San Diego at 4 p.m. Pacific Friday. CBS Sports Network will broadcast all three matches in the playoffs, including the championship game at 7 p.m. Pacific Aug. 3. Follow results at WTT.com/scores or SpringfieldLasers.com. Vegas ends its inaugural season with a record of 6-8. The Rollers finished two matches out of the final playoff spot.