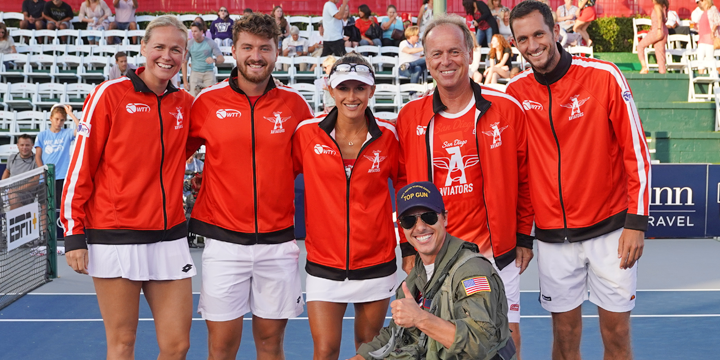 CARLSBAD, Calif., – The red-hot San Diego Aviators withstood a tough challenge on Wednesday night at the Omni La Costa Resort & Spa and came away with a thrilling 21-18 victory over the expansion Orlando Storm. San Diego concludes the World TeamTennis regular season with a 9-5 record and in third place in the WTT standings.

The Aviators could be the team to beat as they head into Friday’s WTT Playoffs on a five-match winning streak. San Diego is scheduled to play the Springfield Lasers at 7 p.m. ET/4 p.m. PT at Orleans Arena in Las Vegas.

Having been eliminated from playoff-contention earlier in the week, Orlando came into Carlsbad loose and free-swinging and from the start of the match, pushed the host Aviators to the limit.

After Jonny O’Mara and Anna-Lena Groenefeld gave San Diego an early lead with a 5-4 win over Darija Jurak and Ken Skupski in Mixed Doubles, 17-year-old Whitney Osuigwe shocked Arina Rodionova 5-1 to give the Storm a 9-6 advantage.

The Aviators then relied on their strength in doubles to take a 16-14 lead after sweeping Men’s Doubles and Women’s Doubles.

As Men’s Singles took center stage in the final set of the evening, Evan King scored an early service break against James Ward and went on to take a 4-2 lead. With the match deadlocked at 18-18, Ward held and then broke serve in the eighth game to tie the set at 4-4 when King’s down the line forehand sailed wide on breakpoint.

With San Diego leading 20-18 and the home crowd cheering loudly, Ward clinched the match for the Aviators, winning a hard-fought tiebreaker over King.

“It’s been good fun, matches like this. First week was difficult, a lot of travel but since then it’s been really fun. Great crowds and support,” Ward said after wrapping up the win for the Aviators. “Now we’re in the playoffs. Let’s go for the win there, why not? I’d love to win it, go away with a trophy and hopefully come back next year.”

After missing out on postseason play with the Aviators in 2018, doubles veteran  Groenefeld is thrilled to be heading to Las Vegas on Friday for the WTT Playoffs.

“It’s great. Last year we didn’t make it, but making it this year is really great. We had a great team, finishing third. Everything is now open. I think we have a good shot at it,” she said. “This is the best setup there is in the league. The crowd is always great, the court and everything around and the great weather. It’s so great to be on this team.”

With a strong military presence in San Diego, it was only fitting the Aviators designated their final regular season match as Top Gun Night, which featured a Tom Cruise look-alike and a free pair of Aviator Sunglasses to fans entering the tennis venue at Omni La Costa Resort & Spa. It was back in 1986 when the popular movie Top Gun, starring Tom Cruise and Kelly McGillis, hit cinema screens. The movie, based on the United States Navy’s Fighter Weapons School at Naval Air Station Miramar, included more than half a dozen scene locations in San Diego County. Among the locations were Kansas City Barbeque in Downtown San Diego, the Point Loma Coast Guard Lighthouse and the Mission Beach Plunge. During this evening’s match, music from the Top Gun original soundtrack kept Aviators fans entertained.

One of the familiar faces who has attended Aviators matches in Carlsbad this season is International Tennis Hall of Famer Charlie Pasarell. The 75-year-old native of Puerto Rico turned professional in 1968 and reached a career-high No. 35 in the world in 1974. In 1969, Pasarell played a historic match at Wimbledon against Pancho Gonzalez that took five hours and 12 minutes to complete, a tournament record for the longest match that would stand for 41 years. During his playing career, Pasarell helped form the Association of Tennis Professionals and also teamed with Arthur Ashe to help launch the National Junior Tennis League. Following his retirement from professional tennis, Pasarell served as Tournament Director of the professional tennis tournament in Indian Wells, Calif., from 1981 to 2009. Today the event is known as the BNP Paribas Open.

The Aviators will travel to Orleans Arena in Las Vegas for the World TeamTennis Playoffs. San Diego will face the Springfield Lasers in a semifinal match at 4 p.m. (PDT) on Friday, August 2. Follow results on WTT.com/scores or at sandiegoaviators.com. The match will be broadcast live on CBS Sports Network. Aviators Coach John Lloyd will have Anna-Lena Groenefeld, Arina Rodionova, Jonny O’Mara and James Ward in the line-up for the WTT Playoffs.