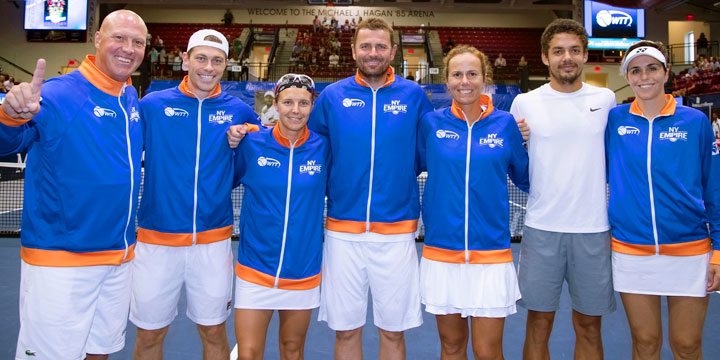 PHILADELPHIA – The Philadelphia Freedoms entered their final home match of the season needing a win to complete an undefeated campaign at Hagan Arena while the New York Empire needed a win to clinch the fourth and final playoff position.

After jumping out to an early 10-5 lead after the first two sets of play, the Empire needed to hang on at the end to grind out the 21-16 win over the first place Freedoms and clinch the final spot in the upcoming WTT Playoffs.

The WTT Playoffs will be held on Friday, August 2 and Saturday, August 3 from at the Orleans Arena in Las Vegas.

“It’s incredible to lead this team to the playoffs for the first time in team history,” said first-year head coach Luke Jensen, who is the Director of Racquet Sports at Westside Tennis Club the former home of the Empire. “I was very blessed when I was given the opportunity by the Empire and the league and Commissioner Carlos (Silva) who thought this was a good fit. The Cary Leeds Center for Tennis is a special place where over 80,000 kids go through this place. We are built for WTT and Billie Jean King was the driving force for my family to start playing tennis.”

“After 13 matches and on the road quite bit obviously the team is a little tired and once we knew we had first place clinched no matter what I say or how psyched the team is there is going to be a bit of a letdown,” said Freedoms coach Craig Kardon. “I am proud of the way the team fought and how Taylor and Raquel did their best to get us back on track and give us a chance to win.”

Start spreading the news -- finally we have four! 🎾🎾🎾🎾. The @nyempiretennis 🗽 grab the No. 4 spot in the #WTTPlayoffs thanks to a 21-16 win against the @PhillyFreedoms🔔. #WTT2019 #EveryPointCounts pic.twitter.com/6OLEoVGXcW

Thanks to Mardy Fish and Neal Skupski who topped the Freedoms tandem of Fabrice Martin and Mitchell Krueger in Men’s Doubles to open the evening followed by a come from behind win by Fish in Men’s Singles against Krueger, the Freedoms knew they had a hole to dig out of when they took the court for Mixed Doubles.

In the Men’s Singles match, Krueger broke a 2-2 tie when he won a deciding point on Fish’s serve to go up 3-2. Krueger would then hold serve and go up 4-2 in the set while slicing Philadelphia’s deficit to 7-5 in the match.

In Mixed Doubles, the New York pair of Skupski and Maria Jose Martinez would defeat the Freedoms pair of Martin and Raquel Atawo 5-3 pushing the Empire’s lead out to 15-8 which would be the Freedoms largest deficit at home all season heading into the final two matches.

As they done all season, Townsend and Atawo picked up a crucial 5-1 win over Flipkens and Sanchez Martinez to put Philadelphia right back into the match heading into the final set.

In that final set, Flipkens took the court knowing all the pressure was on her facing off against Townsend who has been one of the top players all year.

“After we went down 5-1 in the women’s doubles match I knew all the pressure was going to be on me,” said Flipkens. “Taylor was the reigning Female MVP and she has been amazing all season.”

With Townsend holding a 3-2 lead, Flipkens would hold serve winning an always important 3-all point to level the match. Flipkens would then build off that hold by breaking Townsend before holding serve to clinch the win for New York.

“Tonight was great and I was just happy to be part of this team,” said Flipkens. “I knew going into the last set the pressure was going to be on me and I thought I handled it well.”

“Taylor is tough to play against and we worked on different things because we knew how difficult it is to play against Taylor,” said Jensen “She was a big difference tonight.”

“This match is already behind us,” said Kardon. “We are looking forward to the playoffs this weekend.”

The Freedoms and the Empire now travel to Las Vegas for the WTT Finals weekend which be held on Friday August 2 and Saturday August 3. Watch live on CBS Sports Network or follow along on WTT.com/schedule or at PhiladelphiaFreedoms.com.