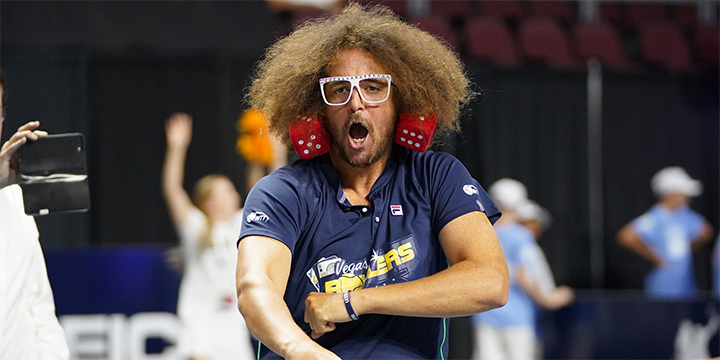 LAS VEGAS – Asia Muhammad and Evan Song had plenty of pent up emotion.

Both are from Las Vegas, and with Muhammad’s tennis career rooted deeper in her city, she wanted to close the home portion of the Vegas Rollers’ schedule making a statement.

For Song, he wanted revenge for the season-opener.

Both got their wish, as the Rollers stayed alive in the playoff hunt. Battling for the fourth seed, the Rollers stopped the Orlando Storm, 22-18, in an important match that even attracted UNLV Football coach Tony Sanchez, whose Rebels open camp Thursday.

Muhammad’s and Song’s energy seemingly ignited Matt Reid and Jovana Jaksic, as the Rollers won their last two sets by a combined final of 10-6, breaking a 12-12 tie.

“The two things we wanted (were) energy and focus, and I felt like I got the team going, at least early on, to head in that direction,” said Song, who lost in the final match of the season-opener in Orlando, where he squandered two match points and dropped a super tiebreak that allowed the Storm to eke out a 21-20 victory in the opening-night battle between World TeamTennis’ two newest franchises.

“I wanted to redeem myself. I was thinking about that (match) and once I had the 40-15 (lead) I said, ‘there’s no way I’m losing this.’ It was extra motivation tonight because Evan is one of my best friends and we’ve battled a bunch on the tour and he’s gotten the better of me. I wanted to get this one at home.”

Song, who surged into the match with a 4-1 lead, set the tone for Vegas’ energy.

“Throughout the season we’ve had some players say ‘I don’t like playing this position, I’d rather play in this position,’ so we were trying to do the math of it and the only scenario we liked was having (Evan) play first,” Vegas coach Tim Blenkiron said. “He’s the type of guy that embraces any situation. He said ‘coach if you need me to play first, I’ll play first.’ He came out with amazing energy and heart.”

Then Muhammad stepped on the court with Jovana Jaksic for women’s doubles against Darija Jurak and Whitney Osuigwe, the former No. 1 junior in the world. Jurak and Osuigwe answered with a 5-3 win. Jurak was dominant in landing all 12 of her first serves, while the duo registered points on 71 percent of Osuigwe’s first serve. Muhammad wasn’t finished though.

King and Ken Skupski topped Song and Matt Reid in men’s doubles, 5-4, tying the match at 12, and then it was Muhammad’s turn.

Ranked 234th in the world, Muhammad – who has stepped up since Harriet Dart injured her foot on July 23 – was about to face someone 11 years to her younger, and who was ranked 124 spots higher.

Muhammad took a quick 3-0 lead after breaking Osuigwe’s serve twice. The 17-year-old promptly responded by winning the next three games to make it 3-3. Osuigwe clearly had enough poise and appeared wise beyond years to match talent-for-talent, what she lacked was the experience and pure physicality and conditioning and know-how Muhammad brought to the court.

The proud Las Vegan outlasted Osuigwe by breaking her serve in the seventh game, and holding serve in the eighth to pull out a 5-3 win and put Vegas on top, 17-15.

“This has been an amazing experience for Asia,” Blenkiron said. “It’s hard to play in front of your home crowd, I don’t care who it is. Every match she’s played she’s gotten better and she’s gotten looser and playing more of the tennis she is capable of. She was the difference tonight. She played beautiful tennis.”

Muhammad teamed with Reid to close things out with a 5-3 win in mixed doubles against a combination of Jurak, King and Skupski. Tied 2-2, Reid served the Rollers to a momentum-building 3-2 lead behind three consecutive aces, the last one clocking in at 139 miles per hour. Orlando won the next game, Muhammad then held serve at love in front of the frenzied few who made it out, and clinched the match for the Rollers.

“Asia played great today, she played three sets and did a great job; Evan played a great set of singles and Matt’s a great doubles player,” Orlando coach Scott Lipsky said. “Vegas has a great team. They brought in some great players to play some of their big matches. They’ve got a lot of good players and they can definitely do well in the playoffs if they get there.”

The Philadelphia Freedoms, Springfield Lasers and San Diego Aviators are locked into the top three seeds, respectively, In the logjam for the fourth seed are the Rollers, New York and Orange County.

The Empire clinch a playoff spot with a win, or an Orange County loss. They hold the head-to-head tiebreaker over the Rollers after splitting the regular-season series, and holding the edge in games, 44-40. The Breakers need help and would get in with a victory and losses by New York and Vegas.

The Rollers need the most help. They need to win, they need Orange County to win, and they need the Empire to lose. A three-way deadlock in the standings turns the decision over to which team won the most games. Heading into Wednesday, Vegas leads with 253, Orange County has 246, and New York checks in with 244.

Vegas is at Springfield, Orange County hosts Washington, and New York is on the second of a back-to-back series against Philadelphia, which routed the Empire 25-15 in the Big Apple.

“We dug ourselves a hole early and I wrote up the comeback early, thought if we went 5-2 after starting 2-5, we could make the playoffs,” Vegas coach Tim Blenkiron said. “That’s really been the focus since the halfway point.”

The playoffs are Friday and Saturday at Orleans Arena.

Osuigwe won the girls’ Junior French Open in 2017, made it as far as the quarterfinals at Wimbledon two months later, and then finished the year ranked as the No. 1 junior in the world before turning pro.

Yet with all she’s accomplished, she’d never enjoyed an In-N-Out burger. That was, until Tuesday, when she touched down in Las Vegas.

“We don’t have that in Florida,” the 17-year-old Bradenton-native said laughingly.

Currently ranked 110th in singles, Osuigwe has played in nine of the Storm’s 13 matches during her first year in World TeamTennis.

“It’s definitely been a lot of fun, that’s for sure,” said Osuigwe, who is 68-81 overall this season. “It’s a fun environment … it’s not as serious as a regular tournament. My team has wowed me. Overall, I would do it again, it’s been really fun.”

She admitted the rigorous demands in World TeamTennis has disrupted her daily tennis and nutrition routine, but also believes it will benefit her career.

“It’s definitely gonna make going to a tournament seem a little easier,” Osuigwe said. “You don’t have to fly that morning and play a match that night. Stuff like this teaches you how to start from the very beginning, and not let down, because you’re playing first to five and you never know what can happen. I think this has made us stronger.”

One of the most exciting moments for her was Monday’s battle in Orange County, where the Storm trailed the Breakers 14-8 heading into the final two sets, battled back to tie the match and lost in a super tiebreak.

“That was definitely exciting, and you don’t usually get to see stuff like that in tennis,” she said. “We lost, but it was still a thrill.”

The tennis players have certainly been the stars during Rollers home matches, but for the athletes, the real MVPs have been Conrad Corona and Lew De Leon from House of Tennis, a premier tennis pro shop in Las Vegas that has been courtside to string racquets for all seven home matches.

Corona and De Leon not only have strung players’ racquets, but have also customized the strings with each player’s sponsors using stencil ink

“It’s pretty exciting, the interaction with all the players you see on TV, they come out here to play the WTT circuit,” said Corona, the manager for House of Tennis. “The whole vibe, the whole WTT, the whole environment, it’s exciting. It’s just a fun atmosphere. Not just good tennis, but it’s just fun for everybody.”

Corona has been to hundreds of events, both big and small, and said World TeamTennis has been the best event he’s attended.

“It’s more fun, it’s more relaxed, it’s a great atmosphere for everybody,” he said. “Even the kids, the adults, just to see some good quality tennis out there. You can’t beat it. The music, the excitement, the dancing, all the entertainment that goes with that, it’s pretty entertaining for everybody. I’ve really enjoyed it.”

The Rollers conclude their inaugural season visiting the defending champion Springfield Lasers at Cooper Tennis Complex on Wednesday. The match begins at 8 pm ET/5 pm PT. It will be televised on ESPN-plus and on WTT.tv.

The Storm, who are also in their first season, finish the campaign in San Diego, where they’ll play the Aviators on Wednesday night at Omni La Costa Resort and Spa at 10 pm ET/7 pm PT. The match will be televised on ESPN+.