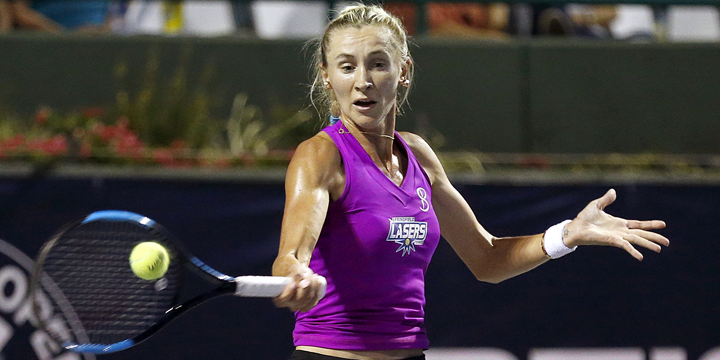 That’s what the Springfield Lasers yelled as they broke their huddle after a 22-16 win over the Orange County Breakers at Cooper Tennis Complex Tuesday night, and for a good reason.

The win breaks a four-match losing streak and clinches Springfield’s spot in the World TeamTennis Semifinals, Aug. 2-3 in Las Vegas. The Lasers are the defending WTT champions.

“We’ve dominated most of those matches, but we weren’t using our opportunities,” Springfield coach JL de Jager said . “We led by five going into the last set tonight and that makes it tough on the other team. The scoreboard pressure is big. This team has done well and I’m really proud of them.”

Newcomer Olga Govortsova turned the match in Springfield’s favor with a 5-2 win over Nicole Gibbs in Women’s Singles, the fourth set of the night. Govortsova, playing her third match as a sub for Anna Blinkova, roared ahead 3-0, before a break got Gibbs on the board.

Momentum was on Gibbs’ side as she held serve to make it 3-2. She even took a 15-0 lead in the next game before Govortsova got her legs back under her and rallied to win the set.

With a 22-16 win over the #OCBreakers at home, the defending champions have locked up a playoff spot! #WTT2019 #EveryPointCounts #OCvsSGF pic.twitter.com/xr0m4otzuq

“I played (Gibbs) in the last U.S. Open and lost to her, so I really wanted to win today,” Govortsova said. “I feel like I’ve played very well in singles. Hopefully we can get some wins in doubles.”

The Minsk, Belarus, native is looking sharp as she enters her second year back on the tour. She gave birth to her son, Dominic, on Valentine’s Day 2018 and eased back on the tour just a couple of months later.

“The last year was super tough. I was thinking maybe I couldn’t play anymore,” Govortsova said. “This summer I started getting good results, so we’ll see. My goal is to get into the top 100 this year.”

Her coach in Springfield isn’t betting against her.

“She’s surprised all of us,” de Jager said. “The thing that amazes me is the calmness that she’s playing with. It’s unbelievable. She’s making good decisions and she’s been great. If she improves her serve and her fitness, there’s no reason she can’t be top 50 in the world.”

Enrique Lopez Perez got Springfield off on the right foot with a 5-2 win over Noah Rubin in Men’s Singles. Lopez Perez had his serve dialed in, blasting five aces in the set.

Govortsova and Abigail Spears broke Andreja Klepac‘s serve to take an early 2-1 edge in Women’s Doubles, but Orange County broke right back. It was all Breakers from there, though. They closed out the set 5-2.

Gibbs, like Govortsova, is mounting a comeback. She underwent surgery for a rare form of salivary gland cancer two months ago. Springfield’s Robert Lindstedt, a tour veteran, stopped Gibbs to tell her he’s impressed with her and offer encouragement.

“I’ve felt so supported in general by the tennis family,” Gibbs said. “Everybody has made a point throughout this season to say something to me, so it’s really meaningful for me. I started slow and (Klepac) has had to baby me through the season, but I think I’m finally starting to pick up my level and earn her as a partner.”

Lindstedt and Spears defeated Klepac and Luke Bambridge 5-3 in Mixed Doubles. Lindstedt and Lopez Perez put a bow on the night for the Lasers, winning Men’s Doubles 5-4 (5-0). That ended the match and started the celebration for the SpringVegas Lasers.

The audience at Cooper Tennis Complex had a youthful vibe during the match. Members of the local Boys & Girls Club filled up a club box across from the Breakers bench. A group of 39 Missouri State University students from Shandong Province, China, sat at center court.

Vic Vaughn performed the national anthem before the match. Vaughn, a native New Yorker, has been performing since age 8. He toured the country with various musical acts, including the ’50s doo-wop group The Flamingos.

Spears got a little flustered as the teams waited to resume play after a TV timeout in mixed doubles. The stadium was silent when someone in the crowd yelled, “You’re so pretty, Abi.” Spears, who has family in the Ozarks, couldn’t help but laugh.

Orange County owner Eric Davidson joined his team at Cooper Tennis Complex. Davidson also owns a stake in WTT. Ken McClure and Phyllis Ferguson, the mayor and mayor pro tem of Springfield, were also in the crowd. Ferguson is a former member of the Springfield-Greene County Park Board, which owns the Lasers.

The Breakers return home Wednesday to play their regular-season finale. The Washington Kastles visit for a 6 p.m. Pacific match that can be seen exclusively on ESPN+. Springfield will also finish its regular season at home. The Lasers host the Vegas Rollers at 7 p.m. Central tomorrow. ESPN+ and WTT.tv will both broadcast the match. Follow results live at WTT.com/scores, SpringfieldLasers.com and BreakersTennis.com.