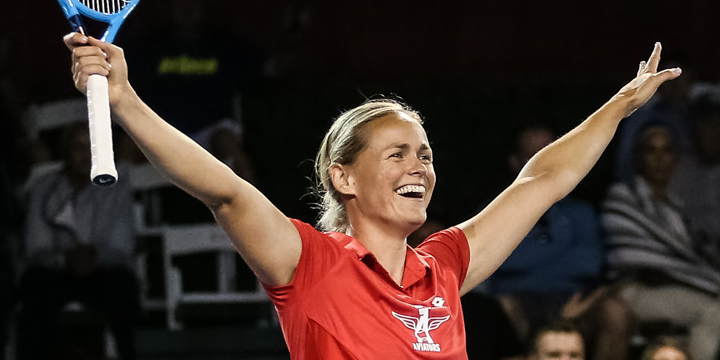 CARLSBAD, Calif., – It was a night to remember for the San Diego Aviators as they swept all five sets against the visiting Washington Kastles and finished with a dominating 25-7 victory on a cool summer evening at the Omni La Costa Resort & Spa.

The win was the fourth straight for the Aviators, but more importantly the strong performance clinched a spot in the World TeamTennis playoffs for San Diego, which begin this Friday at Orleans Arena in Las Vegas. The Aviators will attempt to reach the WTT Finals for the third time in the last four years.

Jonny O’Mara and Anna-Lena Groenefeld set the tone early in the Aviators favor as they opened with a thrilling 5-4 win in Mixed Doubles over Marcus Daniell and Kaitlyn Christian of the Kastles.

The Aviators then played some of their best tennis of the season as they dropped only three games in the last four sets to complete the rout of the Kastles. In Men’s Doubles, O’Mara and James Ward took only 10 minutes to wrap up a 5-1 win over Daniell and Jared Hiltzik of the Kastles.

Earlier in the match, Arina Rodionova gave the Aviators a 10-5 advantage as she defeated Katrina Scott of the Kastles 5-1 in Women’s Singles.

“I just tried to be as solid as I can. I try to have fun out there, and it’s so easy with this court and this crowd. Every game and every point is fun,” said Rodionova. “My team is great. We get along so well. I spend time with them off and on the court and I think that’s the key to success.”

As the team celebrated its playoff-clinching victory, Coach John Lloyd spoke about how the Aviators came through to reach the playoffs and their chances to win the King Trophy.

“It’s great. That was the aim at the beginning of the season, you don’t think about winning it. You think first ‘let’s make the playoffs’ and then you go from there,” he said. “A couple of times in the season, we were down a bit and it was a fight to get back in there, but it was a great effort.”

Lloyd added, “Philadelphia is the team to beat, they are the leaders. Anything can happen. If our guys keep playing the way they are now, we’ll be a match for anybody.”

With the victory, San Diego improves to 8-5. They are currently tied with the Springfield Lasers for second place in the World TeamTennis standings. The Aviators will play a team to be determined in the WTT semifinals on Friday.

After falling to the Aviators this evening, the Kastles are 2-11 and in eighth place.

One of the most popular promotions during the Aviators home season took place today as San Diego tennis fans were treated to “Taco Tuesday.” Spectators received 50% off all tickets purchased online for Tuesday’s match when they used the code TACO. There was a lively pre-match Happy Hour which featured $5 margaritas and taco specials from all of the Aviators food vendors. The first 300 fans entering the gates also received a free koozie.

During the 2019 World TeamTennis season many notable guests have attended San Diego Aviators matches at Omni La Costa Resort & Spa, including International Tennis Hall of Famers Jimmy Connors and Tracy Austin. Both former No. 1 players have ties to the San Diego area. Austin, the 1979 and 1981 US Open champion, won a San Diego WTA event multiple times during the late ‘70s and early ‘80s. Most recently, she has attended the Pacific Coast Men’s Doubles Championship at the La Jolla Beach & Tennis Club over the last several years to watch her son Brandon Holt compete for the USC Trojans. Connors competed in a men’s tournament at La Costa during the ‘70s and in the ‘80s he played exhibitions at the San Diego Sports Arena against Ivan Lendl and John McEnroe.

The Aviators close out the WTT Regular Season as they host the expansion Orlando Storm at 7 p.m. (PDT) on Wednesday, July 31 at Omni La Costa Resort & Spa in Carlsbad. In their previous meeting on Wednesday July 17, the Aviators defeated the Storm 25-15 at the USTA National Campus in Orlando, Fla. Live streaming is available on ESPN+. Follow results on WTT.com/scores or sandiegoaviators.com.