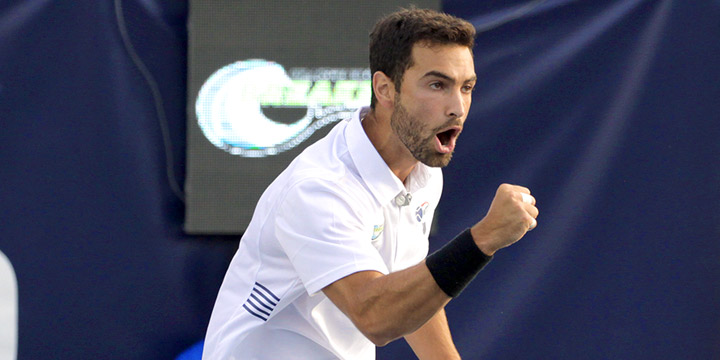 Newport Beach – In what has become the norm for the Orange County Breakers, their match was yet again decided by a single game on Monday night against the Orlando Storm. 2014 NCAA singles finalist Noah Rubin weathered the storm in his season debut to hold off Evan King 7-5 in the Supertiebreak.

“This is what tennis needs! The atmosphere of people getting into it, people going nuts. This is what we’re missing and this is what I talk about all the time, but I think we could get there and we just have to have more people involved like we have today,” Rubin said. “I’m going to tell people how incredibly fun this is and how this should be tennis. Everybody’s drinking eating, going nuts! Have music going on. This is what tennis should be.”

King played superb and won 12 of his 14 first serve points to put the hammer down on Rubin, who had just flown in from the east coast this morning after competing in qualifying of the Citi Open in Washington D.C. this past weekend. With his new team’s playoff hopes on the line, Rubin got a game on the board and saved a match point at 0-4 on the deciding point.

Although King closed out the set for a 5-1 win, Orlando and Orange County were all knotted up at 18 games, setting up a dramatic finish in the Supertiebreak which the former Wake Forest standout was able to win over the former University of Michigan standout.

“First of all, it was a lot of fun. World TeamTennis in itself is a sweet environment,” King said. “I know Noah well, I’m able to compete with him a decent amount of the times. We have a lot of fun on the bench, it’s easy to play well in this environment.

“And today I served great. I was making shots. This was also his first match of the season, on a different court. I’m sure the DC courts are different from this. No one’s comfortable but man I was close!”

Orange County carried over the momentum from their dominant 25-11 win over the Kastles in the first match of their doubleheader on Monday, cruising in the mixed doubles and women’s singles sets to hold a 10-3 lead after the first two sets. Luke Bambridge and Andreja Klepac earned their second 5-1 win of the day together, defeating former Breaker Ken Skupski and his partner Darija Jurak.

Nicole Gibbs also faced off against a talented teenager for the second time in a day, but this time did not let her foot off the gas and raced out to a 5-2 victory over young star Whitney Osuigwe.

Orlando got back in the match, with King and Skupski earning a 5-4 win in the tiebreak over Rubin and Bambridge to trim the lead a bit, before Osuigwe and the veteran Jurak got the 5-3 win over Klepac and Gibbs to set up the battle of former collegiate stars.

Orange County has had six of their last eight matches decided by just a single game, coming out as the victor in three of those.

Orlando was eliminated from playoff contention as a result of Monday’s loss in their first season as a franchise in the league.

As part of Military Appreciation Night, veterans received free admission to the match, and were seated in a courtside VIP section. Newport Beach Mayor Pro Tem Will O’Neill was also in attendance to see his local sports team in action.