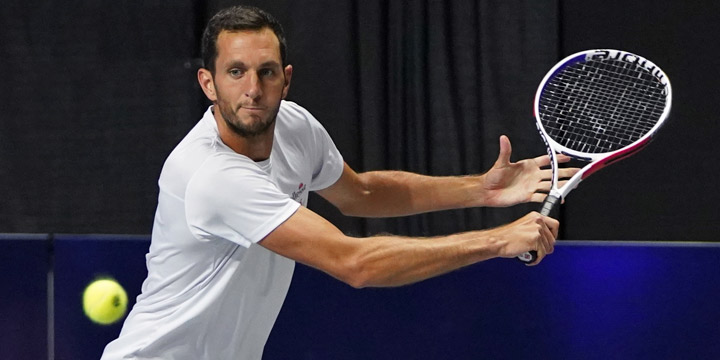 LAS VEGAS – James Ward stole a supertiebreak victory for the Orange County Breakers when they visited the Vegas Rollers on Thursday.

On Sunday morning he was traded to the San Diego Aviators and Sunday night he returned to Orleans Arena  and may have thrust a dagger in the Rollers’ hopes to make the playoffs in their inaugural season.

Facing Vegas’ Sam Querrey in Men’s Singles for the third time in four nights, Ward helped the Aviators defeat the Rollers 23-18, avenging a 23-15 loss on July 19.

Ward – who lost to Querrey 5-2 in Orange County on Saturday – was traded early Sunday and joined the Aviators in Las Vegas for the teams’ crucial match.

“I’ve got a good history with him,” said San Diego coach John Lloyd, who gave Ward his Davis Cup debut, when Lloyd was captain for Britain. “When this sort of all started fermenting and happening, we thought the opportunity to get him for this match, plus the next two, we thought he would be a tremendous addition. Obvious we go up against a team like Vegas, they’re a good team, you’ve got to try and match some guns. Sam is a class player and tough to play against. You look at someone like James Ward and he’s someone that has the firepower to stay in there and keep it close. If he can sneak a win great, but as long as he can hang tight that just makes things a little bit easier for the rest of the match.”

In his first night in a @SDAviators ✈️ uniform, @JamesWardtennis seals the victory and brings down the @VegasRollersWTT🎲 23-18. #WTT2019

San Diego, which has now won three straight, improved to 7-5 and moved within a half-game of the defending champion Springfield Lasers, who are sitting in second place.

Vegas fell to 4-7 and a full two games back of the fourth-place New York Empire.

“In team tennis you never what the hell is going on, that’s why I love it so much,” Lloyd said. “It’s the most unpredictable league that there is, just about. You just don’t know, any day it can change so quickly. And with the way the scoring is anything can happen, but we feel pretty good.”

Querrey and Asia Muhammad took early leads of 3-1 and 4-2 in the first set, which featured four consecutive breaks of serve. But Jonny O’Mara and Anna-Lena Groenefeld battled back to capture the last two games and then won the tiebreak, 5-3, to take the set, 5-4.

Muhammad responded in Women’s Singles, as she outlasted former WTT Finals MVP Arina Rodionova, the 2011 Female Rookie of the Year. Rodionova broke Muhammad’s serve in the seventh game and held serve in the eighth to force the tiebreak, but the Las Vegas-native took the tiebreak and knotted the match at 9-all.

The match went to a third straight tiebreak, as the men’s doubles match between Querrey and Matt Reid and O’Mara and Ward found its way to a ninth game. The Rollers tandem dominated 5-1 to give Vegas a 14-13 lead in the match.

The tide turned in San Diego’s favor heading into the women’s doubles match, however, as Groenefeld and Rodionova were dominating in breaking Muhammad’s and Sabrina Santamaria’s serve twice en route to a 5-1 set victory to give San Diego an 18-15 lead, setting up the men’s singles showdown.

“It’s just the way that the season has kind of gone,” Vegas coach Tim Blenkiron said. “We’re right in there and then one bad performance and it’s kind of tough to recover. We were right there with them, I was actually feeling really confident about the women’s doubles, they’ve been playing lights out the last couple of nights, it’s just tough to keep the consistency of those performances. The teams that are successful are in it all five sets.”

Blenkiron remained confident in his team’s outside chance at making the postseason, reiterating Lloyd’s sentiments that anything can happen down the stretch.

Serbian sensation Jovana Jaksic was at home Saturday night in Sacramento when she took a call she never thought she’d receive. The 25-year-old, who is currently the 219th ranked women’s singles player in the world, signed a contract with World TeamTennis in March, but figured this late in the season most of the rosters were set.

Then she answered her phone. A little more than 15 hours later she touched in Las Vegas and joined the Rollers.

“I wasn’t expecting anything from it because there are so many other players that have been playing for the teams before; usually if you played before, you’ll go back to the team you represented,” said Jaksic, who lived in Las Vegas from 2014-16. “So, receiving the call last night, I was really excited to come here and be with the team. It makes it that much more special because it’s Vegas. It’s kind of like a home team for me.”

Jaksic, who has 17 ITF titles and a career record of 283-197, said she’s been paying attention to the three-week season, and was aware of the standings and how tight things have gotten for the fourth spot.

“It’s really close to the playoffs, so these are important matches,” Jaksic said. “I’m proud to be a part of the team right now at this moment. When they pick me to play, I’m going to give my best and hopefully we’ll get the wins and make the playoffs.”

Former Virginia Slims player and 1960s tennis legend Sylvia Hooks sat courtside for Sunday’s showdown, and said she couldn’t be happier to have World Team Tennis in Las Vegas and couldn’t wait to get her season tickets once she heard the league was expanding.

“It brings out the camaraderie that is available when you play tennis, rather than what we see all the time on the individualism of tennis,” Hooks said. “I was so excited when I found out that they had a team here. It just brings out the best in the children here supporting, and the adults who will come out.”

Also attending, and fresh off his Top 5 finish in the second-largest natural bodybuilding competition in the world – Musclemania’s Fitness Universe in Miami – classic physique pro Jordin Ramirez sat courtside for his first World Team Tennis event. The two-time Musclemania champion is a season-ticket holder for the NHL’s Vegas Golden Knights and said the energy level for the Rollers felt similar, to a lesser degree obviously, considering the capacity of Orleans Arena.

“I tend to have a short attention span at live sporting events,” said the 23-year-old Las Vegas-native laughingly. “But the action World Team Tennis brings keeps you on the edge of your seat. These are some phenomenal athletes to watch, and I’m excited to see my hometown team make a run at the playoffs.”

The Rollers return to action Monday night at Orleans Arena, where they’ll host the Washington Kastles at 10 pm ET/7 pm PT. It will be televised on ESPN-plus. Vegas won the first meeting 22-18, at Kastles Stadium at Union Market in Washington D.C., on July 15.

The Aviators will enjoy a day off before hosting the Kastles on Tuesday night at Omni La Costa Resort and Spa at 10:30 pm ET/7:30 pm PT. The match will be televised on CBS Sports Network. The Aviators eked out the first meeting, 20-19, on July 16 at Kastles Stadium.