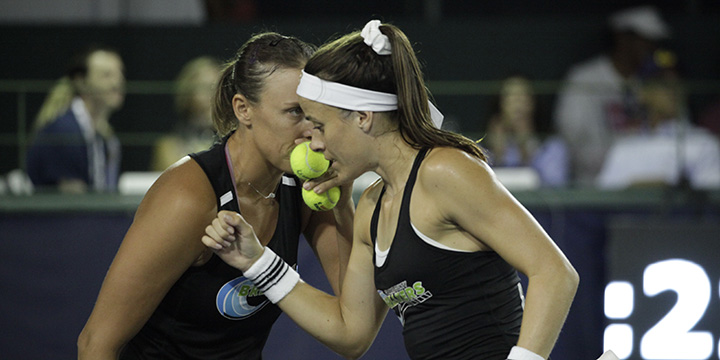 NEWPORT BEACH, CALIF. – The Orange County Breakers earned a sweep of all five sets for the first time since their 2017 championship season, dominating the Washington Kastles 25-11 in the first match of two on Monday for each team. The rescheduled match, free and open to the public, occurred twelve days later than planned and all the way across the country.

BREAKERS Vs. KASTLES MATCH STATS | 2019 COMPLETE STANDINGS
“I have to really hand it to our team. They answered the bell. They’re not even used to playing on the tour this early. Everybody played well. It was nice having Petros (Chrysochos) on our team, he played really well,” Breakers coach Rick Leach said. “There was a couple close sets there, Nicole had a tough one but she came through. It was a good warmup for tonight, we have a huge match against Orlando. And we have to win out I think to make the playoffs.”
2017 WTT Female MVP Andreja Klepac and two-time ATP doubles titlist Luke Bambridge set the tone for the morning, earning a dominant mixed doubles win over Kaitlyn Christian and Marcus Daniell before, Klepac and Gibbs dropped just six points for a win in women’s doubles over Christian and Katrina Scott.

The Kastles however got some life from the youngest player in the league, with the 15-year-old Scott racing out to a 3-0 lead against fellow Southern California resident Gibbs. The former Stanford standout got back on track, making a comeback and winning in a tiebreak without dropping a point.
Orange County wrapped up the first match of each team’s doubleheader Monday, with Chrysochos and Bambridge toppling Hiltzik and Daniell in each pair’s first time on the doubles court together.

Orange County executed a trade after their last match, sending James Ward to the San Diego Aviators and acquiring Chrysochos, as well as San Diego’s first round pick in the 2020 draft. The Breakers also just signed 2015 NCAA finalist Noah Rubin for the rest of this season’s matches.

Orange County has the second match of their doubleheader at 6 p.m. PT/9 p.m. ET against the Orlando Storm with live streaming available on ESPN+ and on WTT.tv. The Kastles will hop on a flight to Vegas and head to face the Rollers for a Monday evening clash at 7 p.m. PT/10 p.m. ET that will air exclusively on ESPN+