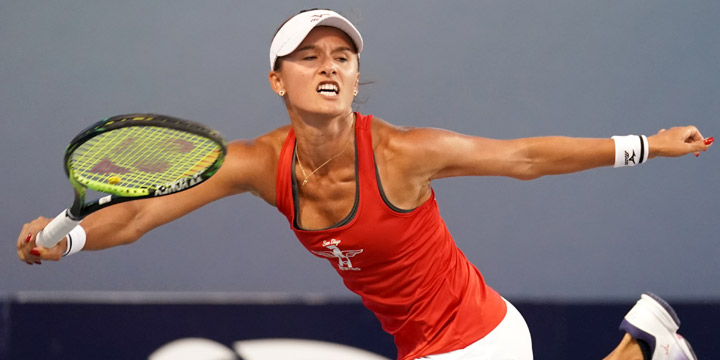 CARLSBAD, Calif. – The San Diego Aviators, sparked by the stellar play of Darian King, cruised past the visiting Orange County Breakers 22-14 on a warm, balmy night at Omni La Costa Resort & Spa. King dropped the first two games of the opening set in Men’s Singles against James Ward of the Breakers, but then found his groove and recovered to win five-straight games to give the Aviators a 5-2 lead, which they never relinquished.

BREAKERS vs. AVIATORS MATCH STATS | 2019 LEAGUE STANDINGS
“I lost two deuce points, which is pretty tough. Coach Lloyd told me to settle down and just play my game,” King said after his victory. “He (Ward) is a great ball striker and he has a great serve. I was really impressed with my game. I came back and won 5-2, which is a big deal.”

San Diego increased its advantage to 10-4 as Jonny O’Mara and Arina Rodionova combined for a 5-2 victory over Luke Bambridge and Andreja Klepac in Mixed Doubles. The Aviators continued to dominate the Breakers as O’Mara and King teamed for a 5-2 win against Ward and Bambridge in Men’s Doubles to put San Diego ahead 15-6. The Breakers stemmed the tide briefly in Women’s Doubles when Klepac and Nicole Gibbs got past Rodionova and Amanda Anisimova 5-2 to cut the Aviators lead to 17-11.

The six-game deficit proved too large for the Breakers in the final set of the evening as Anisimova overpowered Gibbs 5-3 in Women’s Singles to seal the sixth victory of the season for the third-place Aviators.

One of the keys to the Aviators rise in the standings is the strong performance of O’Mara, who is playing his first season of World TeamTennis. “I think we had a lot of fun. The crowd is so good. It’s so much fun playing here. It’s a fun atmosphere and I think we all had a good time on the court,” O’Mara said. “I know it’s a rivalry, Orange County and San Diego and to get a win against my ex-(doubles) partner Bambridge was lovely.”

North San Diego County resident Lornie Kuhle is frequently seen at Omni La Costa Resort & Spa watching the Aviators in World TeamTennis action this summer. A tennis teaching professional, Kuhle served as coach and manager for Bobby Riggs in the early 1970s when Riggs played historic matches against Margaret Court and Billie Jean King. In 2017, Kuhle was a consultant for the movie, “Battle of the Sexes,” the biographical sports film based on the 1973 tennis match between King and Riggs. Kuhle even had a bit part in the movie which starred Emma Stone and Steve Carell. Today, in a bit of irony, Kuhle is Tournament Director of the USTA Billie Jean King Girls’ 16s & 18s National Championships, which are played in August at San Diego’s Barnes Tennis Center. Under his direction, the tournament has grown on the national tennis stage with increased sponsorship, attendance and Tennis Channel coverage on the final weekend. For additional information, go to: ustagirlsnationals.com

The Aviators will travel to Las Vegas to play the expansion Vegas Rollers at 7 p.m. (PDT) on Sunday, July 28 at Orleans Arena. The match will be the second meeting of the season between San Diego and Vegas. The Rollers spoiled the Aviators home opener in Carlsbad as they defeated San Diego 23-15 on Friday, July 19. Live streaming is available on ESPN+. Follow results on WTT.com/schedule or sandiegoaviators.com