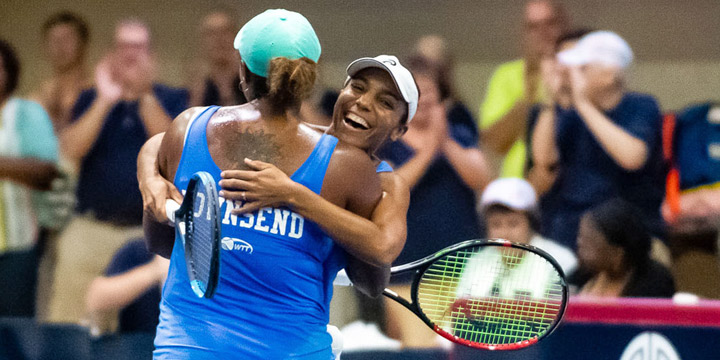 With the match tied at 15-15 going into the final set, which happened to be Women’s Doubles, the Philadelphia tandem showed why they are one of the best in WTT with a clutch 5-2 win to seal a 20-17 win and inch the Freedoms closer to the WTT playoffs.

With Philadelphia holding a 4-2 lead in Women’s Doubles against the Washington team of Nicole Melichar and Venus Williams, it appeared as though the Kastles would slice the deficit to 4-3 as they held a 15-40 advantage with Atawo serving.

That would not be the case as Atawo and Townsend would come back and win three consecutive points to win the game and the match.

“I thought Taylor and Raquel were unbelievable tonight,” said Freedoms coach Craig Kardon. “To come back from 15-40 with Raquel serving was huge. If we lose that game, it could change the entire outcome of the match.”

“We went into the final set tied and Taylor and I knew we needed to win,” said Atawo. “Taylor and I have been playing well all season but with Venus (Williams) on the other side you never know what could happen, but I was still confident we were the stronger team.”

With Philadelphia holding a slim 13-10 lead going into halftime, Venus played a big role in leveling the match with a decisive 5-2 win over Townsend in women’s singles.

“I had my chances yesterday (in Washington) but there is a reason why she has only lost one or two singles matches this season,” said Williams, referring to Townsend. “She plays well in this format so to get a couple of games gives me some confidence going into the hard-court season.”

Williams added, “It was so much fun playing in Philadelphia. The stadium has so much atmosphere You hear the roar with everyone standing up. It’s great”

“That’s the beauty of World TeamTennis,” said Atawo. “The two games Taylor won were very important and what she contributes really helps.”

The match really could have swung in Philadelphia’s favor midway through the mixed doubles match between Philadelphia’s Fabrice Martin and Atawo and Washington’s Bruno Soares and Melichar. With Soares serving down 15-30, Melichar appeared to place a slice winner however the chair umpire ruled Melichar had crossed over the net to hit the ball and awarded Philadelphia the point.

With Washington clearly upset over the call, the Freedoms took advantage of the call to win the game and take a 2-0 lead en route to the 5-2 win giving the Freedoms the 13-10 halftime advantage.

Just as they have done all season, the Kastles stuck together and rallied behind Williams to knot the match and set up the thrilling finish in front of a crowd that reached a fever pitch throughout key points in the evening.

“The umpire made the call that Nicole had reached over the net to hit the ball,” said Kastles coach Murphy Jensen. “In our opinion that was too close to call. However, I always tell the team that one set, one shot and one call does not determine the outcome of the match. We have a team of winners and they played like that tonight. We put ourselves in a position to win and made a run. We just came up a little short.”

The match was even at 8-8 following the first two sets with Washington’s Men’s Doubles team of Soares and Yoshihito Nishioka taking the first set 5-3 over Philadelphia’s Christopher Eubanks and Martin before Eubanks bounced back in singles with a 5-3 win of his own over Nishioka to level the match.

Venus Williams is in her 14th season of WTT
This was the first match at home for Philadelphia where they went into the final set with the overall score tied.
Philadelphia remained undefeated at home with the win.

The Freedoms have the day off tomorrow and return to action Sunday night at home against the Springfield Lasers. The Kastles return to action tomorrow night in Washington when they host Springfield The Freedoms match on Sunday night begins at 6:00 PM. Watch live on CBS Sports Network, or follow along on WTT.com/schedule or at Philadelphiafreedoms.com.