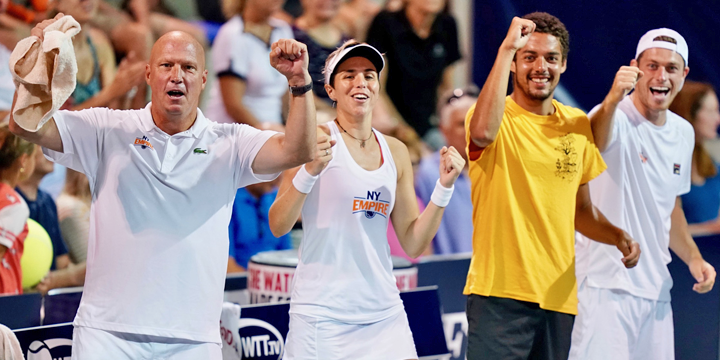 ORLANDO, Fla. – The Orlando Storm fell to the New York Empire by a score of 22-18 on Saturday night as the Storm wrapped up their inaugural home schedule in front of a sold-out crowd.

“Tonight was all about who would win the three-all points,” New York head coach Luke Jensen said. “I though early on, Orlando kept winning the big points, we just couldn’t close the deal. In Men’s Doubles we had a chance but couldn’t close the door. Flipkens has her game down at this point in the season. The crowd was electric and we were able to use that.”

EMPIRE vs. STORM MATCH STATS | 2019 LEAGUE STANDINGS
The evening began with Men’s Doubles as Orlando’s Ken Skupski and Evan King squared off against Neal Skupski and Ulises Blanch. Both sides took care of business from the service line, as both sides held serve for the majority of the set. It looked like a break was imminent from the Empire in the fifth game as New York held a 0-40 advantage. However, the Storm came all the way back to hold serve and keep their momentum in check. Finally, in the eighth game of the set, Orlando earned the break as Blanch double faulted on a deciding point to give the Storm the 5-3 set victory.

It's time for the Mixed Doubles duel in Orlando! The Chase for the King Trophy 🏆 is in 💯mode! Watch the @nyempiretennis and @OrlandoStormWTT now. 📺+ 📊➡️https://t.co/AVI4qUNyaH pic.twitter.com/T1GQGVMH5U

The Empire marched their way right back into the match as Blanch was dominant out of the gate against Orlando’s King in Men’s Singles. Blanch earned a quick victory in the first game before breaking King on his first serve. Blanch then held on a deciding point, giving him a 3-0 lead. King was able to gather two holds but Blanch eventually took the match 5-2 and put the Empire in front 8-7 heading into the middle frame. The third set was tight throughout as it was hard to find an advantage anywhere in Mixed Doubles. Orlando’s Darija Jurak and Ken Skupski came out strong with a 40-0 victory in the opening game.

New York was next to hold as Maria Jose Martinez Sanchez and Neal Skupski survived through a deuce point as they kept things even. The trend continued for the entirety of the set, forcing a tiebreaker. In the extra session, Orlando earned the first two points only to see the Empire strike back with two of their own. The Storm finished off the tiebreaker with three straight points to take mixed doubles by a score of 5-4 (5-2). The set win evened the score at 12-12 going into halftime. Ken Skupski won the battle of the brothers, winning men’s doubles and mixed doubles against his younger brother Neal.

“It’s always great to beat my bro,”  Ken Skupski said. “When we played away he got me twice so now we’re even.”

With just two sets left to decide the match, another doubles set went down to the wire. Alison Riske and Jurak earned a break in the first game of Women’s Doubles over New York’s Kirsten Flipkens and Martinez Sanchez. The break gave the Storm their first lead in the match since they were up 5-4. The Empire retaliated and broke back. Both sides traded a hold before breaking each other once more. The set eventually went to a tiebreaker where Orlando was only able to collect a single point as New York took a 17-16 lead with the 5-4 (5-1) win in Women’s Doubles.

With the matchup for the taking, Flipkens took the court for the Empire in Women’s Singles and started off strong against Orlando’s Riske. Fighting through a deciding point to break Riske and then holding serve, Flipkens earned a 2-0 lead and gave her team a three-point cushion. She continued to cruise from there, earning two more breaks along the way and taking women’s singles by a score of 5-2, winning the match 22-18 for New York.

“We were up by only one game going into the fifth set so I knew the pressure was on me to finish it off,” Flipkens said. “I think I started off well, I got a lot of first serves in today, and I feel like that made the difference.”

The Orlando loss puts the Storm two matches behind the Empire for fourth place in the standings. The Storm have three matches to rally and get into that final playoff spot.

“The loss is disappointing, we had gotten on a bit of a roll lately,” Ken Skupski said. “It has put our season in a little bit of jeopardy of making the playoffs but all we can do now is try and win the last three and see where things go.”

Saturday’s match was Riske’s debut as a member of the Orlando Storm.

The Storm finish their home inaugural home campaign with a record of 4-3 at the USTA National Campus.

A win would have given the Storm a chance to climb into the fourth seed where the Empire sat. The Storm are now two matches behind the Empire with three matches to go, all on the road.

During halftime, one lucky fan from the crowd was able to return a few serves from Riske.

The sold-out crowd was the first in program history.

There was not a spare seat in the house as the Storm returned outdoors to play on the championship court at the USTA National Campus. Orlando enjoyed seeing this team embark on their inaugural season at home.

The Storm hit the road as they’ll finish the 2019 season with three West Coast matches, the first coming against the Orange County Breakers on Monday, July 29 at 9 p.m. Eastern. Watch live on ESPN+ or WTT.tv or follow along on WTT.com/schedule or at orlandostorm.com. As for the Empire, they’ll head home to take on the Springfield Lasers on July 29 at 7 p.m. Eastern on CBS Sports Network.