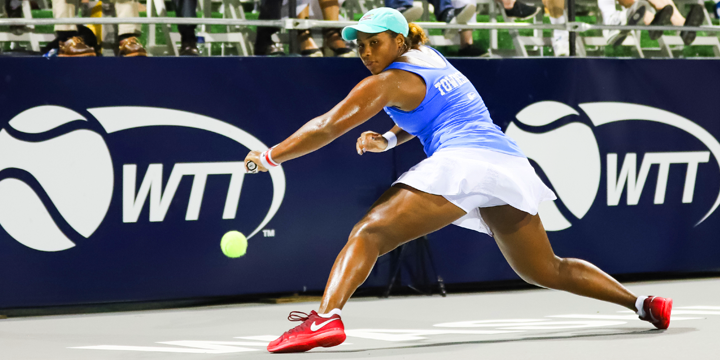 Washington D.C. – Billie Jean King’s Philadelphia Freedoms sent a resounding message to their competition on Thursday — they intend to reach the WTT Final again this year.

The 2018 WTT finalists toppled the six-time WTT champion Washington Kastles on their home court in DC this Thursday night, 24-17, with tennis legend Venus Williams, and Grand Slam doubles champions Bruno Soares and Nicole Melichar in the lineup. Freedoms all-star Taylor Townsend secured the victory over Williams in extended play, after dropping the fifth set in a tiebreak.

“It was never a sure thing when you’re playing Venus,” said Freedoms head coach Craig Kardon after the match, “but Taylor came through for us in a big way.”

Williams has pulled off a number of sensational comebacks during her 14 years of WTT. Last season, she memorably saved three-straight match points (and four overall) to clinch a thrilling win for Washington over the San Diego Aviators, 21-20, on the last and deciding 6-all point. But a lopsided opening against Philly forced the Kastles to play catch-up for the duration of the match.

French Freedoms duo Fabrice Martin and Adrian Mannarino ran away with the first set in men’s doubles against Kastles stars Yoshi Nishioka and Soares. After exchanging service holds to start the set, the Freedoms broke Nishioka’s serve, then scored another insurance break off Soares two games later to allow 6’6” Freedoms giant Martin to serve out the set, 5-1, on a deciding point.

Nishioka got the Kastles back on track with a win over Mannarino in men’s singles. Just when it looked like Mannarino might close out the second set, up 4-2 in the tiebreak, Nishioka rallied. The Kastle’s incredible hustle and superior counter-punching skills wore down his opponent, despite a low first serve percentage most of the evening. After saving two set points, Nishioka landed one of his best first serves of the night, and after an extended rally, took the set with a dropshot, 5-4(4), to shrink the Freedoms’ lead to three games, 9-6.

But the Kastles suffered another setback after Soares and Melichar let the third set slip away to Martin and Raquel Atawo in mixed doubles. The Kastles had hoped Melichar’s return to the lineup would help the team’s chances of a comeback. Melichar and Soares are one of the best mixed doubles teams in the world. They reached the semifinals of the Australian Open and French Open, and recently beat tennis legends Serena Williams and Andy Murray at Wimbledon. But in Melichar’s first match since suffering an injury in the quarterfinals at the All England Club, the Freedoms were too tough. After both teams stayed on serve to 4-4, Philly scored two mini-breaks off Soares in the first two points of the tiebreak, then won both Martin’s service points to ultimately take the set, 5-4(2), to push Philly ahead 14-10 at halftime.

The Freedoms inflicted more damage in the fourth set, when former world #1 and 23-time Grand Slam champion Williams and Freedoms slugger and 2018 Female MVP Townsend met for the first time in the match in women’s doubles. The set started close with both teams exchanging early breaks, but up 3-2, Townsend and Atawo broke Melichar and Williams for the second time. Then serving at 4-2, Atawo held at love to take the set and extend Philly’s lead to 19-12 going into the final set of the night.

In the blockbuster finale of the evening, Williams looked as powerful as ever. Townsend had difficulty getting her racquet on the ball in the first three games, which saw Williams surge to a 3-0 lead. But Townsend is a tricky lefty and had only lost one set of singles all season heading into the match. A couple holds and a break got her back in the set. Then serving down 3-4, Townsend held at love with an ace to send the set to a tiebreak.

In classic form, Williams upped her level to take the breaker, 5-4(2), but the games she surrendered to Townsend proved costly. Philly held a six game overall lead heading into extended play, a steep mountain for even Williams to climb.

At 23-17, Townsend served out the Kastles champ to notch Philly’s 8th win of the season.

The Freedoms are currently in second place in the Race to the WTT Playoffs, behind the defending champs Springfield Lasers with an 8-2 winning record. Springfield currently holds a narrow edge with seven wins and just a single loss. The Kastles, meanwhile, are currently 1-7.

The Kastles will get another shot at the Freedoms in Philly on Friday, July 26. Watch LIVE on CBS Sports Network at 7 p.m. EST. Click here for tickets!