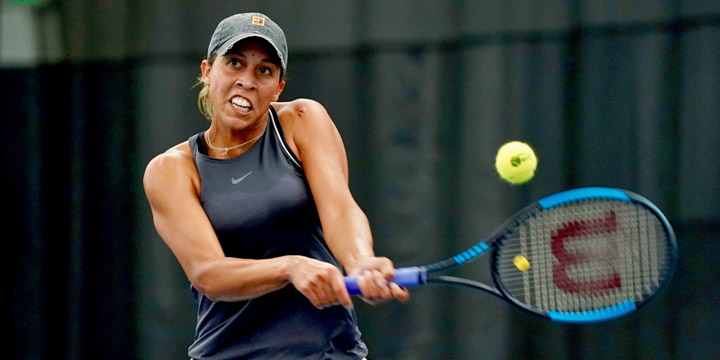 ORLANDO, Fla. – The Orlando Storm picked up their second win in a row as they defeat the Springfield Lasers by a score of 23-15, which was Orlando’s largest win of the 2019 campaign. With the win, the Storm avenge a 23-15 loss from earlier in the season at the hands of the Lasers in Springfield.

LASERS VS. STORM MATCH STATS | 2019 LEAGUE STANDINGS
“We started out with another good set of Men’s Doubles,” said Orlando head coach Scott Lipsky. “It got a little momentum going in our favor which is good. We had Madison [Keys] closing it out, she wasn’t going to lose that match, she played great. It’s really good to have those two sets bookending the match.”

The evening unfolded inside the Adidas Performance Center at the USTA National Campus with Men’s Doubles as Orlando’s Ken Skupski and Evan King were matched up against Jean-Julien Rojer and Enrique Lopez Perez. The Storm got out to a strong start, holding serve and then earning a break to go up 2-0. The third game of the set went to a deciding point that ended up in a break for Springfield. Orlando broke right back, jumping in front 3-1. Both sides held serve from there on out, resulting in an early 5-2 lead for the Storm.

“Ken put the team on his back,” King said. “He held serve both times, did his thing and returned great. I did my thing out there too by making a bunch of first serves. I think our return game was unreal today.”

Springfield worked their way back into the match in Men’s Singles. King and Lopez Perez battled it out from the service line for the entire set. Lopez Perez found himself down 15-40 in the first game but came back to win and hold serve. Orlando’s King answered with a 40-0 hold in the next game only to see Lopez Perez respond with a similar game of his own. The two continued to trade holds until the last game, where Lopez Perez was down 0-40 and rallied all the way back to earn the only break of the set. The 5-3 win closed Springfield’s deficit to only one point as the Storm led 8-7 after two sets.

The Storm surged out to another promising 2-0 lead early in Mixed Doubles as Madison Keys and Skupski held and then broke Springfield’s Abigail Spears and Rojer. Springfield got back on serve but only for a moment as Orlando broke right back. Each side held serve as the set concluded with a 5-2 victory for the Storm as they took a 13-9 lead into halftime.

“It was a good day today,” Skupski said. “The fact that we’ve been home for a few days and practicing inside has made us very comfortable. Generally, everybody played a great match today. I thought we got a good lead from the start and kept a hold of it; we did a very good job winning the big points.”

Anna Blinkova and Spears took the court for Springfield in Women’s Doubles as they looked to cut into the Storm’s lead. It was a tight set through the first five games as the Lasers took a 3-2 advantage over Orlando’s Darija Jurak and Keys. The momentum shifted after that as Orlando held serve in the next game at 40-0 and went on to break Springfield to gain the 4-3 edge. Keys and Jurak fought through a deuce point on their serve to win the set 5-3 as Orlando took a commanding 18-12 match lead.

It was Keys against Blinkova in the final set of the night as the Storm were seeking their second straight match win. Keys ended the first game with an ace on a deuce point to start the trend of the two sides holding serve. Looking to stash away the match, Keys won games three, four and five, breaking Blinkova on a deciding point in the fourth game. Not going quietly, Blinkova bounced back and won the next two games, but in the end it was Keys with her second break of the set to win 5-3 and seal a 23-15 victory over the Lasers.

“I’m really glad we were able to get these last two team wins,” said Keys.

A rowdy crowd of Storm fans packed inside the Adidas Performance Center and were as loud as they had been all season.

The Storm are back in action for their final home match of the 2019 season on Saturday, July 27 at 7 p.m. Eastern against the New York Empire. Watch live on ESPN+ or WTT.tv or follow along on WTT.com/schedule or at orlandostorm.com. As for the Lasers, they’ll head north to take on the Washington Kastles on July 27 at 6 p.m. ET.