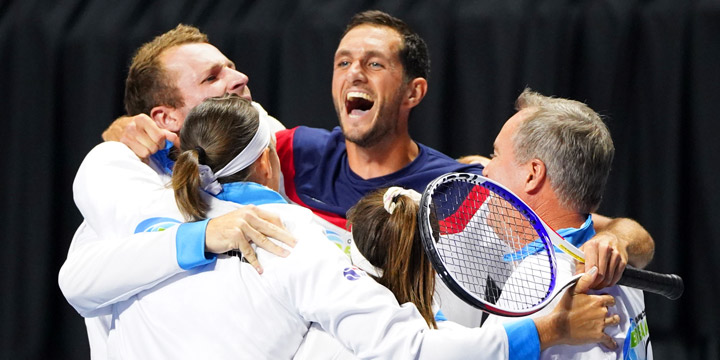 LAS VEGAS – The Orange County Breakers played three straight matches since Monday, a fourth in a row on Thursday and have another pair over the next two days.

With a playoff berth in reach, every match counts.

“It’s a grind, it’s a short season, so every win is so important,” Breakers coach Rick Leach said. “It’s so difficult to win on the road. We lost two matches at home the last three days.”

So, when Thursday’s match inside Orleans Arena against the Vegas Rollers came down to the final point of the Men’s Singles match in a Supertiebreak, James Ward wasn’t worried.

Ward, the 195th-ranked player in the world, blasted a 128 mile per hour serve Vegas’ Sam Querrey couldn’t handle and the Breakers escaped with a 19-18 win.

“We knew tonight was a big one; if we could sneak through here, I think we got a decent chance of making the playoffs,” Ward said. “We still have quite a few home matches; we played a lot away. The first week was tough but I think we got through okay. Let’s see what we can do over the weekend and hopefully by Monday we’ll see if we’re in the playoffs or not.”

Orange County improved to 4-4 to essentially tie San Diego and New York, who are sitting in third place at 5-5. The Breakers visit San Diego on Friday night.

Vegas, meanwhile, fell to 3-6 and dipped to seventh place.

The top four teams make the playoffs, which begin Aug. 2 in Las Vegas.

While both players held serve in the final set, the 39th-ranked Querrey appeared to have the momentum on his own court thanks to an exuberant 1,531 gathering in attendance cheering him after every point.

But Ward broke Querrey’s opening serve of the tiebreak and took a 3-1 lead. Querrey – who had six aces in the set – tied it with the next two points. After the two exchanged the following two points, Ward’s final blast brought the match to an end.

“I thought we both played really good level actually, we both served well, not giving each other too many chances,” Ward said. “You saw it come down to the last point. I had a big serve and thank God (his return) didn’t drop in.”

Trailing 11-9, the Rollers were able to get back in the match behind a strong performance from the women’s doubles team of Asia Muhammad and Sabrina Santamaria, who made her team debut. Longtime friends off the court, Muhammad and Santamaria were able to fend off Orange County’s Andreja Klepac and Nicole Gibbs with a 5-3 victory.

“It feels good to have contributed tonight,” Muhammad said. “Sabs and I go way back. I don’t know if we’ve even played that much together, but I think just us being such good friends off court, definitely helped with the play on court. I think we meshed really well.”

Orange County’s duo of Luke Bambridge and Klepac opened the match out on fire, breaking the Rollers’ serve twice en route to a 5-1 victory over Querrey and Harriet Dart.

The Breakers’ strong showing to start the match didn’t affect Dart, however, as the 22-year-old from London answered the call against Gibbs in women’s singles. After both held serve in the first two games, Dart did an excellent job in forcing the Orange County’s sixth-year pro to race the baseline on nearly every shot and won the last four games to take the set, 5-1, and ultimately tie the match at 6-all.

“I just tried to stay really aggressive the whole time and I was just happy I could level the match for the guys,” said Dart, who injured her foot against New York on Tuesday, but rested it Wednesday to prepare for the match against the Breakers. “In this format it’s so difficult because every game counts and I just wanted to get a win and fight for every game.”

Bambridge teamed with Ward in a tight men’s doubles match and pulled out the set victory, 5-3, over Querrey and Matt Reid thanks to a third-game service break, despite the Rollers’ tandem dominating first-serve percentage numbers, 91-69. The victory gave Orange County an 11-9 lead heading into the women’s doubles match.

Santamaria, who lives in Burbank, Calif., took a call Wednesday and was asked to join the Rollers for Thursday’s match. When she made her way to the court inside Orleans Arena a couple of hours before the match, she knew Vegas coach Tim Blenkiron would have her penciled in somewhere but wasn’t sure in what event. And while the 26-year-old might be ranked 789th in singles, she won the 2013 NCAA women’s doubles title with Kaitlyn Christian at USC and is currently ranked 67th in doubles. She showed no fear and looked fully prepared to compete alongside Muhammad against Gibbs and Klepac.

“I was excited, I had no nerves, I was like ‘I’m gonna play loose and let it fly’ and I’m just excited to be here,” Santamaria said. “I’ve known Asia for a really long time, we’re really good friends, so she was keeping me grounded and we work really well together so it was like playing with a friend. We were having a lot of fun.”

Marty Hennessy, co-founder of Inspiring Children foundation and former professional tennis player, arrived in Las Vegas in 1972 and said the venue and atmosphere was superior to anything Caesars Palace has hosted over the years, including the now-defunct Alan King Tennis Classic and highly publicized $100,000-take-all matches involving Jimmy Connors against Rod Laver and John Newcombe.

“They were great matches, but it wasn’t great entertainment overall as an event,” Hennessy said. “This was the greatest tennis event in town, ever. Overall with the entertainment, the Redfoo, the roller skating – there was always a lot of entertainment going around. And the excitement of the people, the people had a chance to really get involved with what was going on.

“As a tennis event to take your family to, there’s never been a better event than that.”

The Rollers and Orange County play a return match at Breakers Stadium at Palisades Tennis Club on Saturday at 10 pm ET/7 pm PT. It will be televised on ESPN+.

The Breakers, however, will make a quick stop in San Diego to play the Aviators on Friday night at Omni La Costa Resort and Spa at 10 pm ET/7 pm PT. The match will be televised on ESPN+.