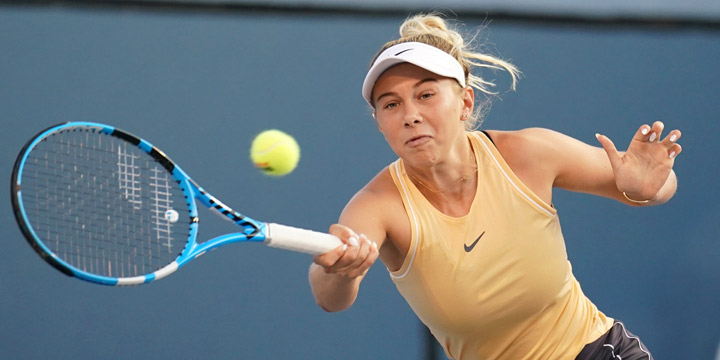 Neal Skupski and Maria Jose Martinez Sanchez gave the Empire an early lead with a 5-2 win in Mixed Doubles over Jonny O’Mara and Anna-Lena Groenefeld. Anisimova, who was making her World TeamTennis debut, teamed with Groenefeld in Women’s Doubles against Martinez Sanchez and Kirsten Flipkens.

With the set score knotted at 3-3, Anisimova blasted a backhand service return on break point at Martinez Sanchez, who hit a volley long. Groenefeld then served out the set in the next game to close the Empire lead to 8-7 heading into Men’s Doubles.
The Aviators took a 12-10 lead in the third set of the evening as O’Mara and Darian King defeated Skupski and Ulises Blanch 5-2.

On set point, O’Mara delighted the large crowd with an inside-out cross-court forehand service return winner past a stunned Skupski. That set the stage for Women’s Singles as Anisimova, who is ranked No. 23 in the world, went up against the 33-year-old Flipkens.

In the beginning, Flipkens used her experience as the Belgian took a commanding 3-0 lead, but Anisimova fought back and showed the winning form that helped her reach the French Open semifinals as she came back and broke Flipkens twice for a 4-3 lead.

Anisimova confidently served out the next game at love to win the set 5-3 and give the Aviators a 17-13 advantage.

“It was my first time (playing World TeamTennis), so I was enjoying it a lot. I love my team. I can’t wait to play again tomorrow. It was so fun. I think we’re supporting each other very well and we make a good team. I’m really happy we got the win today,” Anisimova said.

“I had a bit of a slow start, but once I got my rhythm, I started playing good and my team was supporting me the whole way, so that really helped,” she added.

With a four-game advantage, King wrapped up the victory for San Diego with an impressive 5-2 win over Blanch in Men’s Singles.

“We started off slow. We got that first set down and I was a bit worried. We fought so hard and once we got that second set everything seemed to change,” Aviators Coach John Lloyd said. “It was a team effort after that. Everybody played so well.”

When asked what it meant to have a player like Anisimova in the line-up, Lloyd responded, “She brings a lot of class. She’s a young player but she’s so mature. She hits the ball so well, and she’s the future of women’s tennis. We’re lucky to have her here. We’re very proud of her. She fought from 3-0 down and it was very gutsy of a comeback. She hung in there well.”

With Thursday’s victory, the Aviators snapped a two-match losing streak and evened their record at 5-5. They are tied for third place in the WTT Standings with New York and Orange County.

Rod Laver, one of the greatest players of all-time, has been a frequent attendee at Aviators home matches this season. The tennis legend, who is a North San Diego County resident, is the only player in the history of the game to win two calendar Grand Slams.

On this special night, the Aviators honored Laver for his accomplishments in the sport and his continued support to World TeamTennis during an on-court ceremony during halftime. The Aviators officially retired his WTT jersey, which was hung at the Landing Lounge seating area overlooking Stadium Court.

Laver’s ties to World TeamTennis date back to the 1970s when he was named 1976 WTT Male Rookie of the Year while playing for the San Diego Friars.

It was a memorable night for Tennis Legends at this evening’s World TeamTennis match between the San Diego Aviators and the New York Empire. In addition to Rod Laver, former ATP touring professionals Bob Lutz, Chico Hagey and Walter Redondo, along with former WTA touring professionals Val Ziegenfuss, Allison Bradshaw, Ros Fairbanks Nideffer, Lucia Romanov Stark and Robin White were also recognized during the match. San Diego World TeamTennis fans may remember White. In 1985, she was named WTT Female Rookie of the Year and helped the San Diego Buds win the King Trophy that year.

Amanda Anisimova will play her second and final match for San Diego on Friday, July 26 when Aviators host their Southern California rival, the Orange County Breakers at 7 p.m. (PDT) at Omni La Costa Resort & Spa. In their only previous meeting this season, the Breakers defeated the Aviators 24-17 last Saturday at Breakers Stadium at Palisades Tennis Club in Newport Beach, Calif. Live streaming is available on ESPN+. Follow results on WTT.com/scores or sandiegoaviators.com.