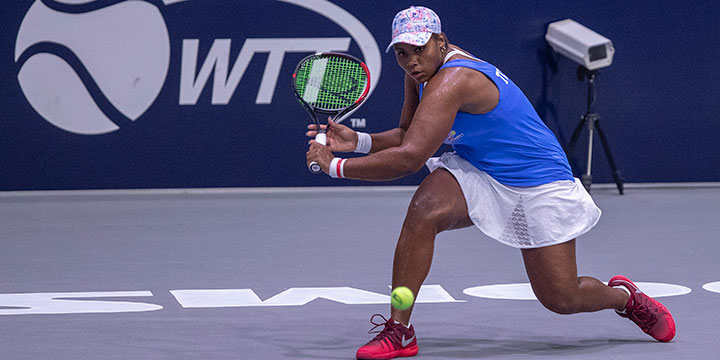 PHILADELPHIA – Ever since she took the court six years ago as a member of the Philadelphia Freedoms for the first time, Taylor Townsend continues to enjoy World TeamTennis year after year.

While she has grown a deep-rooted affection for the Freedoms and World TeamTennis, Townsend is also conflicted each year with the decision on whether she will continue to play.

👀ICYMI: Let's bounce back to the Day 4 of #WorldTeamTennis and check out the top plays. It's a Philly Special featuring @TommyPaul1, @TaylorTownsend and a @redfoo/@FreedomsNettie dance challenge! 🎾🕺 pic.twitter.com/Yi9xl3kQYR

“World TeamTennis is fun. It’s just something that’s different and unique outside your norm on the tour,” Townsend said, following her team’s 23-15 win over the Orlando Storm on July 19. “I’ve said many times I wasn’t going to play, and I end up playing again. I enjoy it. I think I play really well and it kind of gives me confidence for matches going into the summer which is always great. Someone coming back six times shows you do enjoy because if you didn’t you wouldn’t come back.”

When Townsend makes her decision each season to return to WTT, the Freedoms make sure to protect Townsend who has gone from a wide-eyed 18-year-old rookie trying to use World TeamTennis as a launching pad for her WTA career to a 23-year-old veteran and a stalwart for Philadelphia, including a perfect 13-0 singles record in 2018 on her way to capturing the WTT Female Player of the Year.

“Seeing Taylor’s progress year after year continues to be amazing. It’s hard to believe she is only 23 years old,” said Freedoms coach Craig Kardon. “She is a workhorse and we can always depend on her.”

Throughout her tenure in WTT, Townsend has faced young players like herself to some of the great players to play the game. One of those great players has been Venus Williams, the winner of 49 WTA singles titles, including seven Grand Slam titles and 22 WTA Doubles crowns including 14 Grand Slam championships.

On Thursday night the Freedoms face the Washington Kastles in the first of back-to-back matches where Townsend will once again face off against Williams. Thursday night’s match will be held in Washington while Friday night will be staged in Philadelphia.

“I remember playing Venus for the first time (in World TeamTennis) at Villanova and how pumped I was to play someone I looked up to for a long time,” said Townsend. “I am excited to play her again now that I have more experience. I am looking forward to test my nerves.”

“When I was younger I played in glasses and her and Billie (Jean King) were the only other people that played in glasses and she was lefty, so it was like oh she plays in glasses and oh she is lefty,” said Townsend. “ I loved the way she used the court; saw the court and things she could do with the ball. Thought it was amazing. Being lefty, a female who wore glasses I always idolized her and felt I could learn a lot of stuff. You can always learn no matter what day and age because the concepts remain the same.”

Shortly following her match on July 19, Townsend went on her social media account to gauge responses regarding her play. Over the past 18 months, Townsend has waged her own private battle leaving social media for a brief hiatus before making the decision to re-open her account.

“Social media has been a hell-hole for me,” said Townsend emphatically. “”So many people have so much to say all of the time and I was having a hard time filtering it out. I was taking it all in and I finally realized that you are not going please all of the people all of the time. I decided to get back on and I will post what I want and I realize haters will hate. I check after each match and now I laugh at all of the negative things said and I take everything with a grain of salt.”

With the playoffs right around the corner, Townsend’s mind is focused on helping her team do their best.