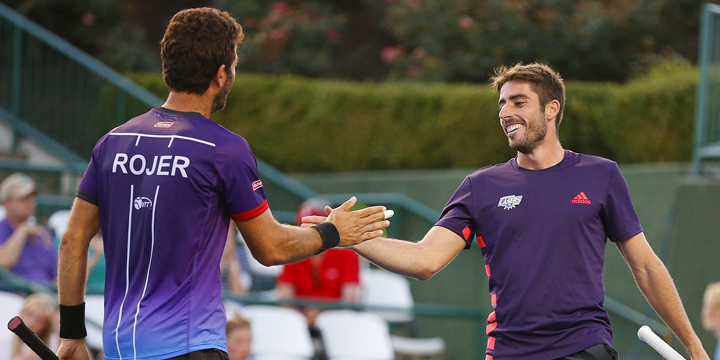 SPRINGFIELD, MISSOURI — Illness swept through the Springfield Lasers on their first road trip of the World TeamTennis season. Some home cooking has them feeling a little bit better, though.

“The whole team’s been sick. On our road trip we were like dogs,” Springfield coach JL de Jager said. “It was not great. We’ve been taking ginger and elderberry shots to get better. (Jean-Julien Rojer) is the worst at the moment.”

#WTT2019: @SGFLasers' 💥 @SpearsAbigail crushes one with authority in women's doubles, but it wasn't enough to take the set, as the @SDAviators ✈️ win 5-3, cutting the #Lasers lead to 17-14. #EveryPointCounts pic.twitter.com/JHzD8ps1cW

You wouldn’t have guessed it from his play. Rojer, playing his last match in Springfield this season, won both sets he played in to help push the Lasers to victory. Rojer and Enrique Lopez Perez were dominant in men’s doubles, breaking Jonny O’Mara early to take a 3-1 lead. Springfield held serve the rest of the way to take the set 5-2.

“Our team play has improved a lot,” Lopez Perez said. “I think it’s tough to start a season. For me, for example, I’m new (to WTT) so sometimes I feel a little pressure. This is a different kind of league. Getting used to the rules, the crowd and the music is a little bit tricky, but now that I’m used to it it’s a lot of fun.”

Rojer later teamed up with Abi Spears in mixed doubles 5-3 to close out the win. Springfield’s dynamic duo go the lone break in the set. It came in the final game, as they got the job done against former Laser Anna-Lena Groenefeld.

Spears and Rojer have lost just one set all season and lead WTT with 37 wins in 62 games, a .597 winning percentage.

San Diego’s Darian King reeled off three straight wins to build up a 4-2 lead over Lopez Perez in men’s singles, the first set of the night. Kiki rallied, holding serve and getting a big break to force a nine-point tiebreaker. But it was all King after that as he took the set 5-4 (5-1). It’s his second win over Lopez Perez in three days.

“It’s tough playing him again so quickly and he played so well in San Diego,” King said. “I’m happy to get the win. It’s fast here, so you have to come out very sharp.”

The Lasers missed a chance to put a stranglehold on the match with a 5-3 loss in women’s doubles. An early break gave Springfield a 2-1 lead and the serve. But San Diego broke Spears to level the score, then broke Spears again to wrap up the win.

San Diego falls to 4-5 with the loss. Springfield, the defending WTT champ, improves to 7-1 and now holds a half-match lead over Philadelphia atop the standings.

“Everybody played well tonight. It was a good team effort,” de Jager said. “We don’t have two good sets. All of our sets are pretty good and that’s what makes us a good team.”

Wednesday’s match marked the final appearances at Cooper Tennis Complex for both Blinkova and Rojer this season. They will play two more matches for Springfield — both on the road — before returning to the pro tour. Blinkova will be replaced by Olga Govortsova in the Lasers lineup. A replacement for Rojer has not been announced.

A pair of WTT bigwigs were in the stands at Cooper Tennis Complex tonight: CEO Carlos Silva and Riley O’Donnell, the executive assistant to the CEO. Also in the crowd were Missouri State Representative Lyn Morris and Springfield Chief of Police Paul Williams.

The Aviators fly home for a visit from the New York Empire at 7 p.m.  PT on Thursday. San Diego will feature Amanda Anisimova. Springfield heads off an east coast road trip, starting with a visit to the Orlando Storm Friday at 7 p.m. Eastern. The Storm will be joined by Madison Keys. Broadcast coverage for both matches will be handled by ESPN+ and WTT.tv. Follow results live at WTT.com/scores, SpringfieldLasers.com and SanDiegoAviators.com.