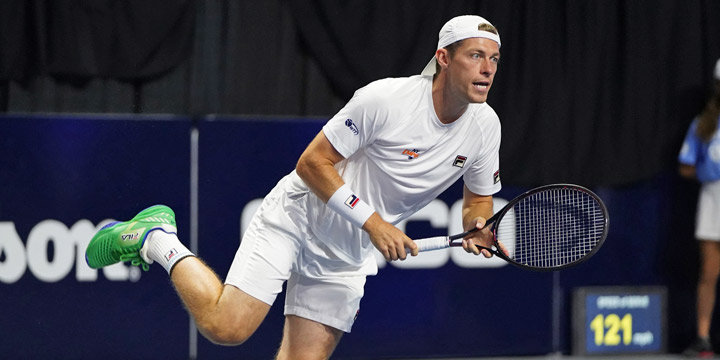 Newport Beach, Calif. – The New York Empire got back on track, stealing one on the road over the Orange County Breakers with a key 20-19 win in their push to make the four-team playoffs. Winning four of their last five matches, the Empire have gained sole possession of third place in the league standings.

“After last night we were gutted,” Empire coach Luke Jensen said. “Vegas took it to us and it came down to the last couple games. And to regroup was important. Everybody is tired in this entire league, this is a grind. You put in two weeks of playing almost every single night. And now we’re in the middle of our road trip and we didn’t know what we were going to get.

“I think for me it was very important to just reset,” Ulises Blanch said. “Flipper did a great job in the women’s singles to close it out there. And I knew we had a chance. We just tried to stay focused every point and we knew that we were playing really well in the doubles, especially the last match. Just very happy to pull through.”

In the first of two consecutive sets in which Maria Jose Martinez Sanchez faced off against former doubles partner Andreja Klepac, Martinez Sanchez and former LSU standout Neal Skupski earned a 5-3 win over Klepac and Luke Bambridge to set the tone for the evening.

Joined by Kirsten Flipkens, Martinez Sanchez earned another win as the Belgian-Spanish duo got a 5-1 victory in the tiebreak against Klepac and Nicole Gibbs.

Two-time NCAA singles champion Steve Johnson won 11 of his 13 first serve points to earn a 10-minute 5-0 bagel over Blanch that give the Breakers a 12-10 lead heading into halftime. The former Orange High and USC superstar finished off his three-match stand in Orange County with a win in his final two singles matches.

2013 Wimbledon semifinalist Flipkens helped chip away at the lead, winning 5-4 in the tiebreaker against former Stanford star Nicole Gibbs for her fourth straight singles win, all of which have come by virtue of a tiebreak.

Down by just a single game, Blanch and Skupski had their minds set on winning without having to contest Extended Play or a Supertiebreak, and they did just that by earning a 5-3 win over Johnson and Bambridge. A crucial break in the seventh game followed by Skupski saving two break points in his service game helped consolidate the break and close out the win.

“We had a great win tonight against Orange County,” Skupski said. “It was a massive win because we’re the sole team in third place now, there’s a little bit of room. We have to go to San Diego tomorrow, big match against them as well because they’re in contention for the playoffs. I think I believe in the whole team.

“Luke Jensen has been great, he’s been so energetic. He’s what we’ve been needing at the New York Empire. We’re looking forward to the rest of the season and hopefully we can push on to make the playoffs.”

Orange County had a third straight match decided by just a single game, after a one-game loss to the Springfield Lasers and a one-game win over the Philadelphia Freedoms.

Orange County heads to Nevada for the first time to face the Vegas Rollers, one of two new expansion teams this season along with the Orlando Storm. The match will be contested on Thursday at 10 p.m. ET/7 p.m. PT exclusively on the CBS Sports Network. The Empire head down south and face the San Diego Aviators Thursday at 10 p.m. ET/7 p.m. PT, with live streaming available on ESPN+ as well as at WTT.tv.