OC Breakers Win A Thriller, Knock The Philadelphia Freedoms Out Of First Place 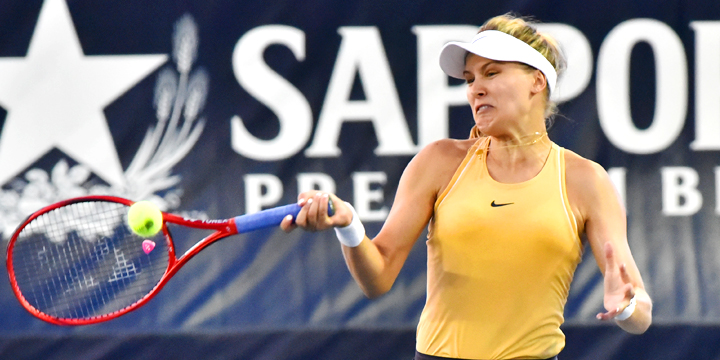 Newport Beach, Calif. – After three hours of play between the Orange County Breakers and Philadelphia Freedoms at the Palisades Tennis Club, the entire match came down to just a single point in the Supertiebreak. The 2017 King Trophy champion Breakers held on to hold off a furious comeback from the first-place Freedoms, earning a big win as they look to secure a spot in next week’s Playoffs.

BREAKERS VS. FREEDOMS MATCH STATS | 2019 COMPLETE STANDINGS
“That’s the great thing about World TeamTennis. It could come down to that last point and it’s happened before while I’ve been coaching, didn’t win it then, so I am really happy,” Breakers coach Rick Leach said. “I actually felt comfortable with Stevie since he’s such a clutch player, and to come up with that big of a serve at the point where it’s match point for both teams just shows what a champion he is.”

“World TeamTennis is a lot about momentum and I thought we had a bunch but then lost it all in the doubles,” Steve Johnson said. “And we had all three tiebreakers tonight go to the deciding point so it was an exciting night of tennis. Luckily, I hit a good serve on the last point and we got the win.”

Johnson and James Ward got blanked 5-0 in men’s doubles, and were even down a match point at 5-6 in the Supertiebreak. However, the American-British duo clawed their way back and on the deciding 6-6 point, Johnson crushed a serve out wide on the AD side that Adrian Mannarino was unable to return leading to the Breakers bench rushing to celebrate with the victors.

To kick off the match, Andreja Klepac and Luke Bambridge improved to 4-1 on the season together, and avenged that lone loss tonight with a 5-4(4) win over Fabrice Martin and Raquel Atawo. On the deciding 4-4 point in the tiebreaker, Klepac hit a backhand down the line winner off of Atawo’s serve to secure the win.

2014 Wimbledon finalist Genie Bouchard made her Breakers debut with a bang, teaming up with Klepac to win both of the key deciding points on Atawo and Taylor Townsend’s serves to get the 5-2 victory.

“The atmosphere was awesome. For the last two matches to go down to a deciding point just shows how cool World TeamTennis is, and how different it is from normal tournaments. That’s why I keep coming back, it’s my fourth year.”

Leach strayed from his usual order of play, moving men’s singles from its usual spot as the fifth set of the match, up a couple sets to being the third set. The move paid off for fellow USC alum Johnson, with the two-time NCAA singles champion digging out of a 0-2 hole and snapping a four-game drought dating back to his match the previous night to earn a 5-3 win over Frenchman Adrian Mannarino.

Former world number five Bouchard helped maintain the lead for Orange County, putting four games on the board and just falling 5-4 in the tiebreak to 2018 WTT Female MVP Townsend.

With the Breakers having a 19-14 lead heading into men’s doubles, a set that does not typically feature many breaks of serve, it looked like the home team had built a large enough lead to earn the upset. But that is the beauty of the World TeamTennis format, momentum can easily change and leads can be erased in the blink of an eye.

The Freedoms saw their seven-match winning streak come to an end, and with a 7-2 record sit at second place in the league standings behind the Springfield Lasers.

With Bouchard featuring in the match, Nicole Gibbs earned another big night of rest as Orange County is one-third of the way through playing six matches in as many days.

USC coaching legend Dick Leach was in attendance, as he watched his son Rick lead the Breakers to a thrilling victory.