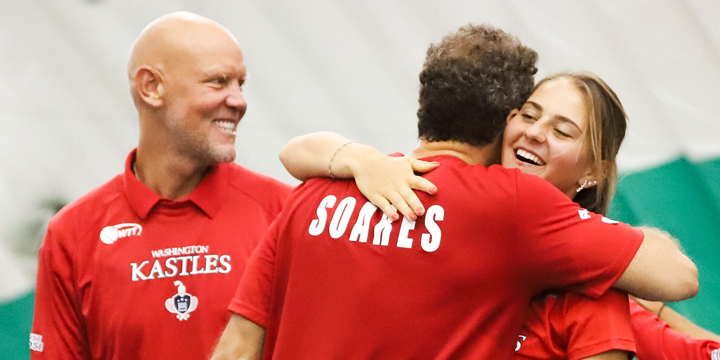 Washington D.C. – The rain couldn’t stop the Washington Kastles this Monday night. In front of an exuberant crowd of diehard fans who filled the bleachers inside East Potomac Tennis Center, the Kastles snapped a five-game losing streak, recording their first win of the season against the Orlando Storm, 23-19.

It was a striking ending for the six-time WTT champs, who began the evening in front of a sold-out house at Kastles Stadium on Union Market, but were forced to relocate indoors midway through the match, due to rain.

The win came on the watch of three-time WTT Coach of the Year Murphy Jensen, who returned to the Kastles bench Monday for his eleventh season as head coach of the franchise. In his first match of the 2019 season, Coach Jensen tapped new Kastles sub Varvara Lepchenko to lead off the evening in women’s singles against Orlando teen star Whitney Osuigwe. Lepchenko was recruited over the weekend to sub for Kastles teen phenom Marta Kostyuk, who sat the night out, due to an injury sustained in Saturday night’s match.

Lepchenko is no stranger to WTT. She previously played for the St. Louis Aces and Springfield Lasers and is a former singles world #19. Still, the WTT veteran started off slow, dropping the first two games to Osuigwe. But Lepchenko found her range in the third game, holding at love, then breaking serve to even the set at 2-2. From then on, Lepchenko had the upper hand, but not without resistance. Down 3-4, Osuigwe saved two set points to force a tiebreak, then pushed Lepchenko to a deciding point in the breaker. But serving at 4-4, Osuigwe netted her approach shot to give Washington the set and early lead 5-4(4).

The Kastles caught fire in the second set when Yoshi Nishioka pulled off the comeback of the season for DC. Down 1-4 to former All-American Evan King, the Japanese world #73 fought back with a barrage of topspin groundstrokes, dropshots, and angle winners to force a tiebreak. Then at 2-2 in the tiebreak, the Kastle scored the first mini-break and his first set point thereafter with a sizzling winner, one of many that night. Returning down 2-4, King scrambled to save the first set point, but Nishioka snatched the set on the next point, 5-4(3), to push Washington ahead, 10-8.

Nishioka continued the momentum in the third set with Kastles all-star and world doubles #7 Bruno Soares in Men’s Doubles. The pair were unstoppable on serve against King and former WTT champ and 2017 Rookie of the Year Ken Skupski. Time and again, Soares and Nishioka set each other up at net with colossal serves, but up 2-1 in the set, their returns clicked, as well. The pair earned three breakpoints on King’s serve. Although they were unable to convert the break, it was clear the Kastles duo were getting a good read on the ball. Then deadlocked at 2-2, rain suspended play, forcing the remainder of the match to be played indoors at the East Potomac Tennis Center. 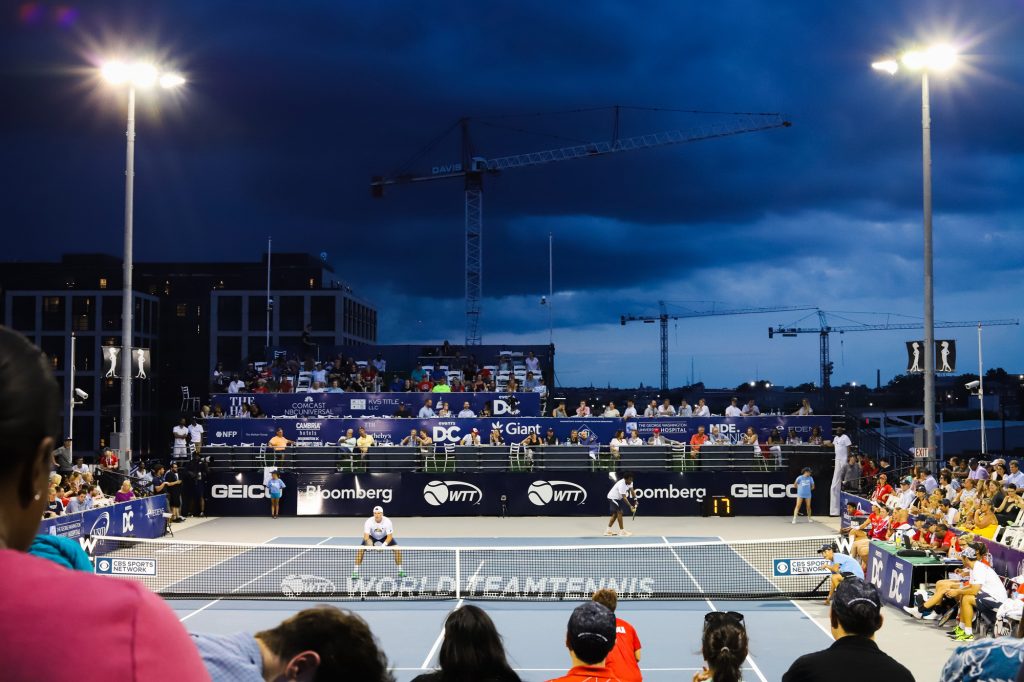 When play resumed, the pace of the match quickened. Both teams appeared to feed off the energy of the animated crowd that traveled with them to see the conclusion of the match. A round of booming service holds from all four players brought on the third tiebreak of the night, and that’s when Soares and Nishioka made their move. The pair ran away with the breaker without losing a point to take the set, 5-4(0), and secure the lead, 15-12, at halftime.

More big hitting followed in the fourth set between new Kastles Kaitlyn Christian and Kveta Peschke and Orlando stars Osuigwe and Darija Jurak in women’s doubles. Peschke, also recruited last minute to ease the injury-plagued Kastles bench this week, is a heavy-hitting WTT star. In her eight seasons of league competition, the former world doubles #1 has played for several teams, and in 2010, helped the Kansas City Explorers win their one and only Championship title, but the Storm apparently wasn’t intimidated.

Osuigwe and Jurak, also a former WTT champion, took it to the Kastles and became dangerous at 2-2 when Osuigwe held and the pair broke Christian’s serve on a deciding point to go up 4-2. The Kastles broke Jurak in the next game to get back on serve, but the Storm didn’t let up. They won the first two points on Peschke’s serve and went on to break the former doubles #1 to take the set, 5-3, and shrink the Kastles’ overall score to 18-17 heading into the fifth set.

The blinding pace of shotmaking continued in the final set with Soares and Peschke blasting Skupski and Jurak form the very first point in mixed doubles. The Storm responded in kind and the score remained even until 2-2. Then after an easy hold from Soares, the Kastles turned up the pressure on Skupski’s serve.

Returning down 0-15, Soares cracked a down-the-line pass to get a foothold in the game. Soares then followed with two lethal smashes that earned the Kastles a 15-30 advantage. Peschke did her part, hitting a volley winner to earn three breakpoints. Despite the overwhelming Kastles fan support, Skupski saved the first one, but Soares captured the second with another down-the-line pass to pull the match within a game of victory for Washington, 22-19.

The Storm fought hard to get the break back. Returning down 2-4, they won the first two points on Peschke’s serve. But with Soares at net, the Kastles ran off three points in a row and took the set on a deciding point, 5-2, to clinch Washington’s first win of the season, 23-19

After Monday’s loss, the Storm is now in 7th place in the WTT standings. The Kastles trail with a 1-5 record on the season.

The Storm will get a rematch against the Kastles in Orlando at the USTA National Campus on Wednesday, July 24. Watch LIVE on ESPN+ beginning at 7 p.m. EST. Click here for tickets.