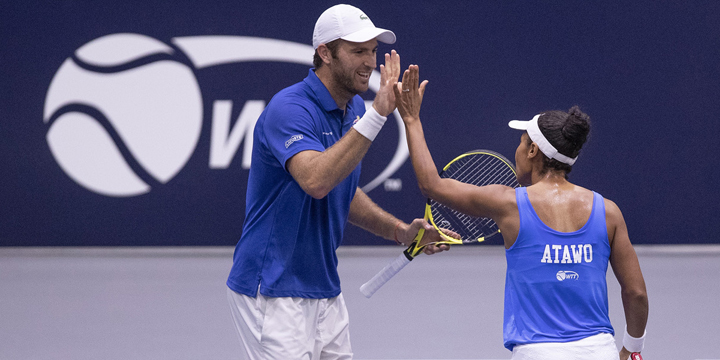 CARLSBAD, Calif., – On a cool evening at the Omni La Costa Resort & Spa, the red-hot Philadelphia Freedoms brought the heat and overpowered the San Diego Aviators 23-16 to win their seventh straight match and remain in first place just ahead of the defending World TeamTennis champion Springfield Lasers.

In the opening set of the match, Fabrice Martin and Raquel Atawo broke Anna-Lena Groenefeld to take a 4-3 lead in Mixed Doubles. Atawo served out the set to give the Freedoms a 5-3 lead, which Philadelphia never relinquished.

The Freedoms continued their strong play, winning Women’s Doubles and Men’s Doubles to take a commanding 15-7 lead at halftime.

Mixed Doubles is off to a great start! The @sdaviators ✈️ put up a strong fight but in the end, the point went to the @PhillyFreedoms 🔔 @fabmartin86 #WTT2019 #EveryPointCounts #PHIvsSD pic.twitter.com/4FVmReGRJv

In the fourth set, local resident CoCo Vandeweghe, coming back from an ankle injury which sidelined her since late last year, showed flashes of brilliance against Philadelphia’s Taylor Townsend in Women’s Singles.

Vandeweghe, a former Top 10 player, broke Townsend in the opening game and kept her off balance with her powerful groundstrokes. With the home crowd cheering her on, Vandeweghe came through with a hard-fought 5-3 win to cut the Freedoms lead to 18-12.

“I’m very happy. That was my first live match I’ve played since December, and I’m really pumped to be back playing. Hopefully I’ll be well enough for the US Open,” Vandeweghe said. “I didn’t know what was going to happen, how I was going to feel, how it was going to look, and I was very happy with how I played and it felt very comfortable for me out there.”

In the end however, Freedoms clinched the victory as Adrian Mannarino overcame a late service break to edge San Diego’s Darian King 5-4 in Men’s Singles.

“Taylor Townsend, Fabrice Martin, Raquel Atawo. Those three players are our core players. Fabrice has adjusted very well. Our team is very disciplined about what we do,” said Freedoms Coach Craig Kardon. “They work hard and they want to win. They all have a role. They are all contributors.”

With the loss, the Aviators, who have lost three of their last four matches, are now 4-4 and in fourth place in the WTT Standings.

The San Diego Aviators are committed to supporting various charities throughout the WTT season. One of the avenues for helping charities is “Aviators Aces.” The Aviators donate $100 to a designated charity for each ace hit by an Aviators player during a home match. Through the first three matches of the 2019 season, over $1000 has been raised for charity through “Aviators Aces.” Tonight’s designated charity was Build a Miracle, a San Diego-based nonprofit organization that builds homes for needy families in Mexico, as well as sponsoring students. For more information on Build a Miracle, go to: buildamiracle.net.

Most celebrities and VIPs attending Aviators matches watch from the stands, but tonight, it was hometown tennis hero CoCo Vandeweghe taking center stage on Stadium Court. The former Top 10 player makes her home in nearby Rancho Santa Fe, Calif., where she grew up. In fact, as a youth, Vandeweghe attended La Costa Canyon High School for a brief period.  As a touring professional tennis player, she will always cherish the opportunity to play World TeamTennis for the Aviators.  “Playing at home anytime for me is special,” said Vandeweghe, who made her WTA debut in 2006 at the former WTA tournament which was played at Omni La Costa Resort & Spa. “I was bummed out when the tournament moved because it’s not that often for tennis players or for me to play in front of people I grew up [around]. La Costa is so close to where I live, and I love looking into the crowd and seeing so many people who have helped me out on the way cheering me on.”

After concluding their two-match homestand, the Aviators travel to Springfield, Mo., to play the defending WTT champion Lasers on Wednesday, July 24 at 5 p.m. (PDT) at the Cooper Tennis Complex. This will be the Aviators and Lasers second head-to-head meeting of the season. San Diego pinned the Lasers with their first loss of the 2019 campaign after a hard-fought 24-20 victory in Extended Play in Carlsbad on Sunday.

Live streaming is available on ESPN+ and WTT.tv.