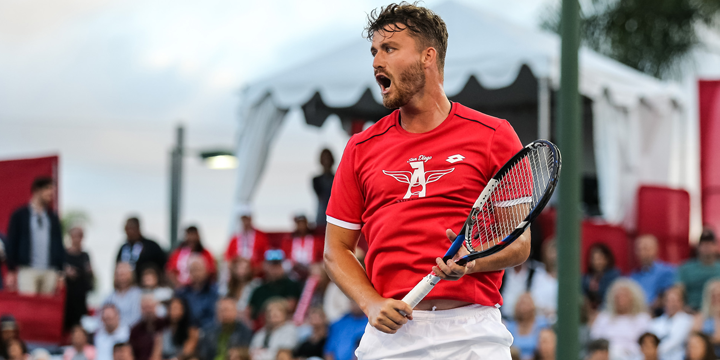 The Lasers, who arrived in Carlsbad with a sparkling 5-0 record, opened the match with a 5-4 win in Mixed Doubles. The Aviators stormed back to take a 9-7 lead as Anna-Lena Groenefeld and Arina Rodionova defeated Abigail Spears and Anna Blinkova in Women’s Doubles.

San Diego increased their advantage to 14-11 after Jonny O’Mara and Darian King scored a hard-fought 5-4 win in Men’s Doubles over Jean-Julien Rojer and Enrique Lopez Perez.

Only in World TeamTennis would you witness an ace like this! @SDAviators ✈️ player @arinarodionova clips the net for a let winner against Blinkova #WTT2019 #EveryPointCounts #SGFvsSD pic.twitter.com/XqMZM9Kpg3

In Women’s Singles, Rodionova broke Blinkova at 3-3 and went on to serve out the set for a 5-3 victory as the Aviators took their biggest lead of the match, 19-14.

Lopez Perez forced Extended Play with a 5-4 win over King in Men’s Singles, but after losing the first game, King clinched the victory for the Aviators as he held serve in the second game.

“It’s a tremendous feeling. This is my first time on the team with the Aviators, and I’m happy that they chose me to come out, and being able to play against tough opponents is a trophy,” King said after winning the match in Extended Play.

“When I was playing with the Philadelphia Freedoms and Orange County Breakers, I knew that this was a great atmosphere,” King added. “I love the people here, and it’s a privilege to come and play in front of these guys.”

Rodionova, a former WTT Rookie of the Year who helped the Washington Kastles win the King Cup in 2011 and 2012, brings a wealth of experience to the Aviators.

“I just wanted to help out my team, and win a few points so that we had a little bit of a lead going into the last set,” she said. “It’s all about how every point matters here. I tried my best and managed to win at the end.”

After making her debut for San Diego, Rodionova feels right at home with the Aviators.

“I think we have a great team going. The bench did so well, we didn’t get down. It doesn’t matter what the score was, we kept cheering, we kept screaming, we kept having fun, and we won at the end.”

With this evening’s loss, the Lasers are now 5-1 and in second place in the WTT Standings. The Aviators improve their record to 4-3 and are tied for third place with the New York Empire.

Prior to this afternoon’s match, the Mitchell Thorp Foundation, which supports families whose children suffer from life-threatening illnesses, diseases and disorders, hosted a “Pillars of Hope Grand Slam Party” at Omni La Costa Resort & Spa. The fund-raising event included a kid’s clinic, food and drinks, a charity auction, and a special meet and greet with Aviators Coach John Lloyd. Following the party, attendees watched the Aviators and Lasers in World TeamTennis action. The party was a big hit as the Carlsbad-based Foundation surpassed its goal and raised over $17,000. For additional information on the Mitchell Thorp Foundation, go to: mitchellthorp.org.

Art of Tennis was the highlight of this evening’s Theme Night. Two local artists displayed their work throughout the tennis venue. One of the artists was 61-year-old Walter Redondo, the No. 1 ranked junior player in the United States in the mid-1970s. Born and raised in National City, Calif., Redondo won USTA National titles in the Boys’ 16s, 14s and 12s divisions. After turning professional, he reached a career-high No. 226 in the ATP Tour singles rankings and played matches against many of the top players including: John McEnroe, Arthur Ashe, Stan Smith, Andres Gomez and Ilie Nastase. During the late ‘70s and early ‘80s, Redondo was a reserve player for the San Diego Friars of World TeamTennis, which featured players such as Rod Laver and Vijay Amritraj. Today, Redondo is San Diego-based artist who exemplifies abstract expressionism through oil paintings, mixed media drawings and sculpture.

The Aviators will host the Philadelphia Freedoms on Monday, July 22 at 7 p.m. (PDT) at Omni La Costa Resort & Spa. Former Australian Open and US Open semifinalist CoCo Vandeweghe, a resident of nearby Rancho Santa Fe, Calif., will be in the line-up for the Aviators. The match will be the second meeting of the season between the two teams. The Freedoms defeated the Aviators 25-11 last Monday in Philadelphia.

Live streaming is available on ESPN+. Follow results on WTT.com/scores or sandiegoaviators.com