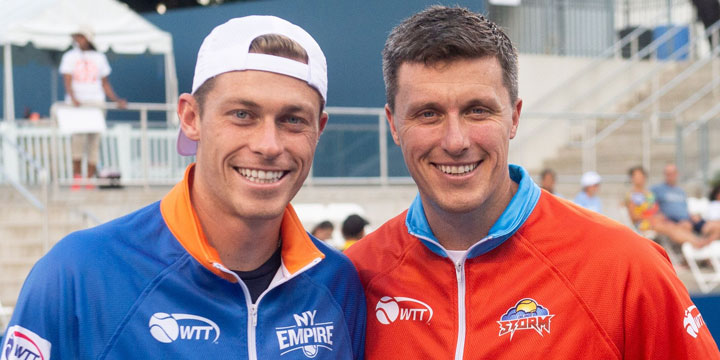 BRONX, N.Y. – The New York Empire overcame a squall — and a Storm — on Sunday night for its third straight win.

It could have proved a trying day for the home team: sweltering weather that plagued the New York City area for much of the week saw the match pushed Sunday’s match back to a 7:00 p.m start, and a brief rain shower delayed play for nearly an hour overall just two games into the first set.

However, the Empire overcame all of its opponents — Mother Nature included — to the tune of a 23-18 overall win over the Orlando Storm.

Just too good from @FlipperKF 👏🇧🇪

Clutch play from the @nyempiretennis 🗽 star, as she executes a perfect serve and volley on the deciding point to get the hold and go up 3-1 against Whitney Osuigwe of the #OrlandoStorm. #WTT2019 #EveryPointCounts #ORLvsNY pic.twitter.com/hCQEU1itnh

“Every one of these players is smart. I can go through every situation where they were against it, and they found their way to get out of a jam,” said Empire head coach Luke Jensen.

“Getting to know each other, our chemistry, we’ve got that down. We have the best chemistry in the league because we haven’t had injuries — no substitutions or anything.

“Now, we go into our road trip…and how we have to play on the road to maintain this momentum.”

Facing off against his elder brother Ken Skupski in World TeamTennis for the second time, New York’s Neal Skupski earned both sets he played in — as he and Maria Jose Martinez Sanchez beat his brother and Whitney Osuigwe to start the night, 5-2, and capped the match alongside Ulises Blanch with a dramatic 5-4(4) tiebreak win over Ken and Evan King on a winner-take-all point.

“We always thought it was going to be close in the final set. Evan and Ken serve really well. Ulises and I are getting better with each match we play and we’re just glad to come through that one,” said the Empire’s Skupski.

“It obviously nice to get the win for the team, but it’s not the nicest thing to play against your brother. We played on tour for six years together, and it’s kind of difficult, because we know each other’s plays inside and out.

“The girls got us a good lead going into the last match…we’re happy with the performance so far, and we think there’s still more to come from us.”

With an off day on Monday, the red-hot Empire now move into its West Coast swing with an eye towards sole possession of third place in the WTT standings — and higher.

“It comes back to day one of our concepts of how we were going to organize this team, and who was going to move forward on character, on and off the court — competitive character and who they are as people,” added Jensen.

“We got veterans and we put in a youngster who is just a tremendous kid. The first third of the season’s over. They accomplished the getting to know each other, what is our identity. We’re not at our best yet, and we’re still playing well.”

The Jensens and Skupskis are not the only siblings to feature in the World TeamTennis ranks in recent years.

Of course, there’s Venus and Serena Williams, who were members of the 2011 WTT champion Washington Kastles and have played a combined 20 seasons of WTT, but did you know about…

The Pliskova twins, former WTA World No.1 Karolina and her left-handed twin Kristyna were on the same team in 2012 — when Kristyna was named the WTT Female Rookie of the Year for the Philadelphia Freedoms.

The Rodionova sisters also have a decorated history in WTT — having been a part of five of the six King Trophy-winning Washington Kastles teams. Combined, Anastasia and Arina won a pair of WTT major honors, with the elder Rodionova being named the Female Co-MVP in 2015, and the younger earning Female Rookie of the Year honors in 2011.

The Empire are off on Monday, prepping for a three-match West Coast swing that begins on Tuesday at Las Vegas, while the Storm travel to the nation’s capital for a 7:00 p.m. match vs. the Washington Kastles on Monday. Former Wimbledon semifinalist Sam Querrey is set to feature for the Rollers against the Empire on Tuesday, and first serve is set for 10:00 p.m. Eastern, 7:00 p.m. Pacific. Follow results on WTT.com/schedule or at nyempiretennis.com, and watch the match live at WTT.tv and ESPN+.