World TeamTennis Brings More Than Tennis To Vegas, It Brings The Show 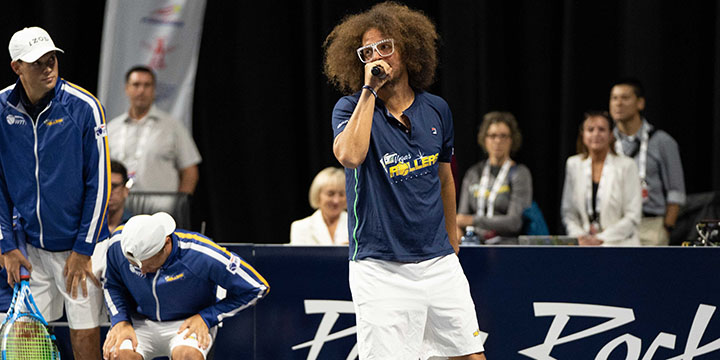 LAS VEGAS — Despite losing their home opener Saturday night – a down-to-the-wire match against the defending champion Springfield Lasers – the Vegas Rollers may have immediately won over a tennis crowd that watched one of the most exciting matches World Team Tennis has offered so far this season.

After falling behind 14-8, the Rollers rallied to within two points behind Monica Puig’s dominating effort in the fourth set, a 5-1 victory over Anna Blinkova, and then tied the match at 18-all when Mike and Bob Bryan won the final two games of their men’s doubles match against Enrique Lopez-Perez and Jean-Julien Rojer to force the final tiebreak.

But it wasn’t just the competition that hyped the 2,318 who were energetic, and loud, and singing, and dancing, and reacting to Rollers assistant coach RedFoo who held a microphone and emphatically yelled “What Time Is It?!” throughout the match. Between Foo, in-house hype man “SSSSnake,” and public address announcer Tony Cordasco, the lively gathering never had a chance to settle down, other than when it was time for one of the players to serve.

It was pure Las Vegas, and Foo believes it’s just what the city’s tennis crowd needed.

“The atmosphere – it was incredible,” said the coiled and kinky-haired former leadman from musical group LMFAO. “It was the Vegas entertainment world meets tennis, and it was an explosion.

“This was huge for Vegas. Vegas has never really had a tennis team. They’ve got the hockey and now you’re gonna have all the tennis fans that Vegas really didn’t even know, and you rile them up and get ’em indoors in the air conditioning, and have the production value – the Vegas Rollers production value – it’s amazing.”

With the success of the NHL’s Vegas Golden Knights at T-Mobile Arena, and to a lesser degree the following the WNBA’s Las Vegas Aces has drawn at Mandalay Bay Events Center, local tennis fans wasted no time in cramming inside of Orleans Arena on Saturday, and are expected to do the same for Sunday’s nationally televised matinee against the Philadelphia Freedoms.

“I must say right now, this whole evening, they’re doing it right,” said Gil Reyes, the former strength and conditioning trainer for retired tennis player Andre Agassi (1989-2006). “What an amazing production of entertainment, and of course the athleticism of tennis. They’re doing it right, I am so proud right now of Las Vegas and I think once the word gets out, we will become the messengers. We should go out and tell Las Vegans and tennis fans about this.”

Reyes, who sat center court in a VIP section, received the USTA’s George MacCall Lifetime Achievement Award mid-match, said World Team Tennis and Las Vegas were made for one another and that he believes the Rollers’ fandom will grow exponentially with those attending raving to three or four new people, who will then want to see what the show is all about.

Because that’s what it was and will be every home match.

Saturday’s show began “The Skating Aratas,” a roller-skating duo from Italy and Russia that performs nightly at Planet Hollywood’s “V – The Ultimate Variety Show.” From there, Rollers Boys and Girls dance team took over, with SSSSnake performing a self-written rap about the team, using names from the roster to connect his rhymes. And, of course, it wouldn’t have been Vegas without a remixed version of LMFAO’s Party Rock, exchanging the words for a tennis-themed anthem.

“I think Vegas will have, by far, the biggest energy,” Foo said. “I know as an away team we’ve gone to venues and our bench is louder than the crowd sometimes, because of the energy we bring as the Vegas unit. We know the Vegas Rollers, so we know that we’re representing the entertainment capital of the world when we go on the road. So now we’re back here … is like more energetic than some of the matches, because it’s Vegas.

“Everybody is tingling with excitement.”

Of course. It’s not just tennis, it’s a show.